Newcomers often sense the difference when they visit southern Beaufort County for the first time. The development ambience of Hilton Head Island and Bluffton has a different feel from other places. Most can’t put their finger on the difference, but they know it’s real.

The land itself is similar to other locations along the Carolinas and Georgia coast, but there is something special here.

This “it factor,” as some like to call it, was awakened almost 70 years ago when a precocious pre-law student, Charles Fraser, convinced his Spartan-like father, Joseph Bacon Fraser, a retired major general and veteran of two world wars and the Korean War, to give him a 20-year note on almost 5,500 acres of Hilton Head Island that the General had purchased and planned to utilize strictly for logging.

It was Charles’ vision to forsake logging on the prime beachfront acreage and instead leave standing the graceful oaks, pines and magnolias. He would then learn about master-planning real estate while earning his law degree. 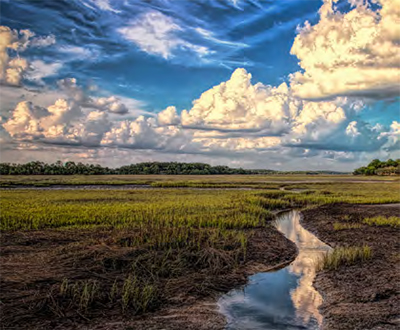 This was the beginning of a phenomenon that has made southern Beaufort County so contrasting from other locales. Its array of premier-gated communities, from Sea Pines to Long Cove, Port Royal, Colleton River, Belfair, Palmetto Bluff and more, all have their own distinctive qualities.

The valuable lesson Fraser learned at Yale Law School was how to effectively utilize land-use legal concepts to create and preserve the best elements of a community by creating private deed covenants that would ensure environmental protection while simultaneously creating value. This strategy became the founding principal of all Sea Pines Company communities —10 in all – stretching from Virginia to Puerto Rico.

Often Fraser and his enthusiastic adherents — many just out of grad school — would square off with older finance executives about how to deal with a prime land tract.

The best example of this was the high bluff of Hilton Head Plantation overlooking Port Royal Sound.

Called Dolphin Head, this magnificent site would have been perfect for a grand condominium project that could reap immediate top dollar for Fraser’s company. However, a young director of environmental stewardship, Glen McCaskey, prevailed. He convinced Fraser that if the site was left alone to be a recreation park and picnic area it would one day be enjoyed by the projected 10,000 private community residents, and thereby be a far greater long-term value. He was correct.

This Fraser mindset of environmentally sensitive development to create value evolved in the 1970s and 1980s earning national recognition and becoming a template for high quality recreational private communities across North America.

Meanwhile, as available land tracts on Hilton Head became scarce, neighboring Bluffton was viewed as virgin territory. Key lessons learned on the island quickly took root on the mainland. Witness the wedding chapel at Palmetto Bluff, Bostwick Pavilion at Moss Creek and the new passive park alongside the Okatie River at the soon-to-be developed Pepper Hall.

Taking note of what was happening in the private sector, especially with national developers like Del Webb and major homebuilders like DH Horton coming into the market in the 1990s, local government entities also stepped forth to ensure that land preservation and protection of local waterways and other environmental assets will be a priority in the face of unprecedented population growth.

Countywide land protection programs began being installed with major planning documents including the Comprehensive Plan in 1999 and the first of two Southern Beaufort County Regional Plans in 2006.

The Town of Bluffton, behind aggressive leadership of Mayor Lisa Sulka has also taken steps to protect its prime environmental asset, the May River.

“We now have public sewer installation in all new neighborhoods and removed outdated and failing septic systems in the Historic District which had been known to cause water quality degradation in the river,” says Sulka.