The first time Matt Garbade went scuba diving in the May River, the darkness was unsettling. But coming back up to the surface was even more harrowing.

Garbade is one of a growing number of divers who brave the Lowcountry’s murky waters in search of treasures, and while he’s grown accustomed to exploring the river bed with limited visibility, he still feels uneasy about coming back to the surface because of boaters who don’t always heed the warnings that divers are in the area.

Divers use a “diver down flag” — typically a red flag with a diagonal white stripe — to indicate their location under the water’s surface, but because divers can stay down anywhere from 30 minutes to two hours and might not surface right at the flag, it’s important for boaters to stay well clear of the area and reduce their speed to avoid a tragedy. 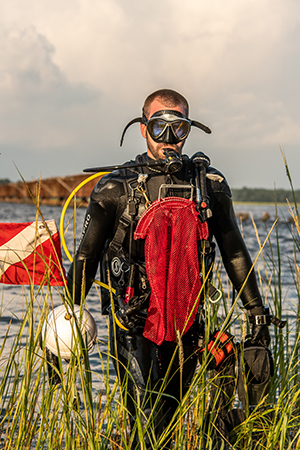 After experienced, Charleston-based diver Alan Devier died in May while hunting for sharks’ teeth in the Beaufort area, Garbade is trying to raise awareness about scuba diving so local boaters know how to help keep divers safe.

Before divers come up, they make a “safety stop” and hover 15 feet below the surface while sending up a 6-foot inflatable tube known as a “safety sausage” to mark their precise locations. Still, Garbade says, boaters often plow through the area and put divers at risk, even occasionally driving over the top of the safety markers.

“We’ll be out there diving, and more than half of these boaters do not even know what a dive flag is,” Garbade said. “They’ll see us and think they need to come as close as they can to see what we’re doing or if we need help.”

So, what are they doing out there? Searching for treasures.

Garbade’s favorite finds are massive teeth from megalodon sharks believed to have gone extinct more than 3 million years ago, but divers also have discovered Prohibition-era glass bottles and artifacts dating to the 1800s and beyond, as well as a wide array of fossils. 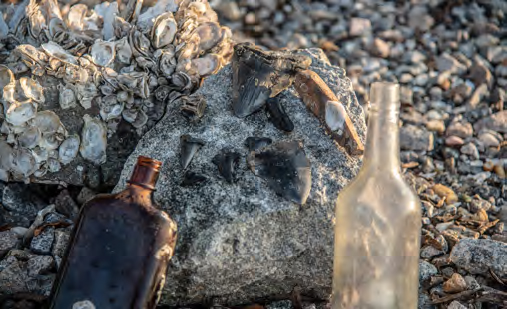 “You’ll be amazed what you find out there,” said Garbade, who once found a megalodon tooth the size of his palm. “It’s incredible. You’re literally holding a tooth that is millions of years old and came from a shark you don’t ever want to see.”

Not that you could necessarily see one while diving in the May River, thanks to its dark, murky waters.

Garbade learned all about the local conditions on his first dive off the Calhoun Street dock near the Church of The Cross. He quickly lost track of his dive partner and had only a few inches of visibility even with a dive light, but he was determined to stick it out.

Once he started finding treasures at the bottom of the river, he lost track of time until his air supply ran low and it was time to resurface two hours later. 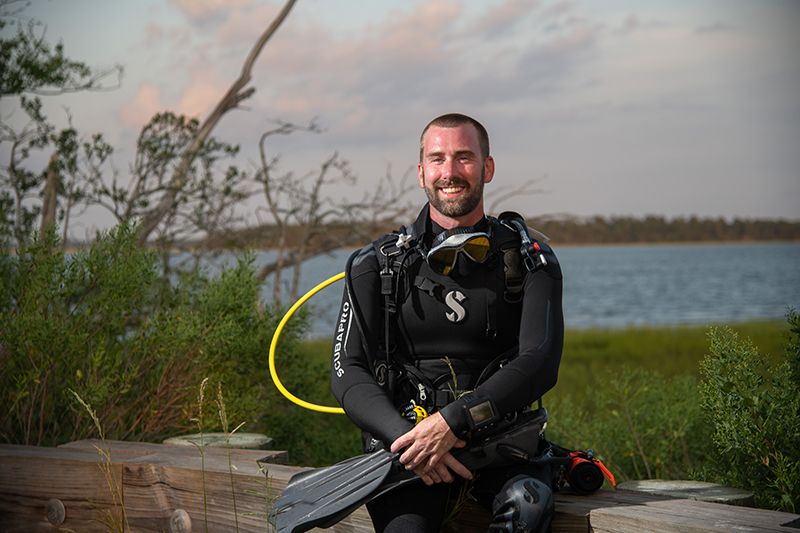 When he came up, he was surprised to find Bluffton police and firefighters had been searching for him. His partner had abandoned the dive after five minutes because of the poor visibility.

Now Garbade finds himself on the other end of those missions.

He has several certifications, including search and rescue, and has recovered everything from drowning victims to a brand-new Ford F-150 that made a splash after slipping into reverse while its owner was launching his boat.

He and others in the Bluffton Dive Club Facebook group regularly dive in the May, but he also regularly dives in the clear waters of West Palm Beach. 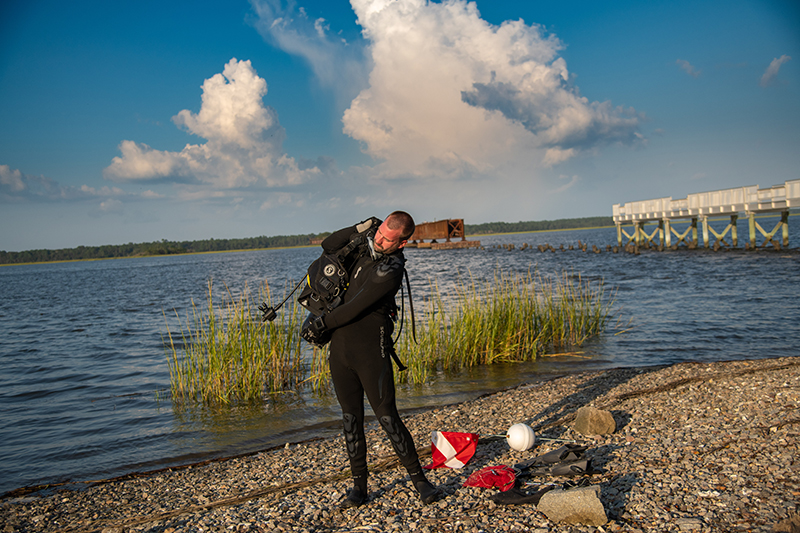 Where can you get certified to dive?
Scooba Shack, which has locations in Savannah and Richmond Hill, offers classes and certifications in clear-water ponds, but many new divers prefer to travel to Florida for certification.

What equipment do I need to start diving?
At a minimum, new divers will want their own mask, snorkel, and properly fitted fins. All the necessary gear is available to rent or buy from dive shops.

What should I do if I see a diver down flag while boating?
Reduce your speed and stay well clear of the area. Divers can stay down anywhere from 30 minutes to two hours and may not resurface in the direct vicinity of their flag.