A kayak and canoe trail winds through the tupelo-cypress swamp at Ebenezer Creek. Locals know that paddling is the best way to experience this unique habitat. 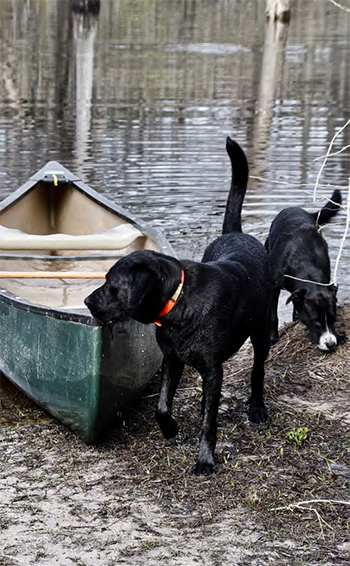 Ebenezer Creek is a tributary of the Savannah River in Effingham County, about 20 miles north of Savannah. This beautiful and majestic swamp is populated by cypress and tupelo trees. Its unique seasons and varying water levels, make exploring this fascinating eco system a year-round opportunity. It’s best visited from March to October when the swamp is leafy green, but makes for a comfortable exploration in winter when the temperatures are cooler and the branches are bare.

This pristine and historic area is a blackwater creek — tannins released by the decay of the leaves and needles of the trees turn the water dark. Luckily, the water is acidic enough so that mosquito eggs can’t hatch. Very few of the biting insects are found here.

Specialized roots allow cypress trees to live in consistently inundated environments, and their swollen bases and tapered long trunks extend out to “cypress knees.” It all provides stability in heavy winds and floods. A distinct “knee” — roots that protrude from the surface of the water — allows the tree to access oxygen during flooding.

Cypress trees lose their flat, long needles in the winter, and the tupelo loses it leaves. The name “tupelo” literally means “swamp tree” in the language of the Muscogee Nation.

This beautiful and majestic swamp, populated by cypress and tupelo trees, is important for flood mitigation and water filtration. 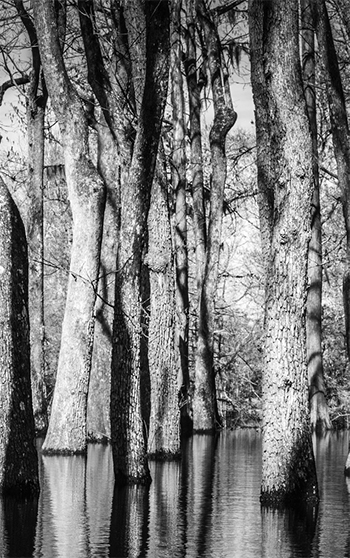 A natural trail opens up among the trees. Most people are surprised to learn that paddling backwater is no harder than paddling in a lake.

“There’s no real current, so paddling upstream is just as easy as paddling downstream,” said Cohen, an Effingham Historical Society board member.

The variety of cypress found here is “balding cypress,” which thrives in a place that most trees cannot; some are 150 feet tall and represent centuries of growth. The “balding cypress” is hollow and thus is not used for lumber. It is still used for cypress mulch, a landscaping product.

While exploring Ebenezer Creek by canoe or kayak, it’s possible to imagine what life was like before the Civil War. Those familiar with the area’s history also know tragedy happened here.

On Dec. 9, 1864, an incident at the creek during the Civil War resulted in the drowning of many people newly freed from enslavement. Union General Jefferson Davis crossed Ebenezer Creek with his 14th Army Corps, headed toward Savannah from Atlanta during General Sherman’s “March to the Sea.” 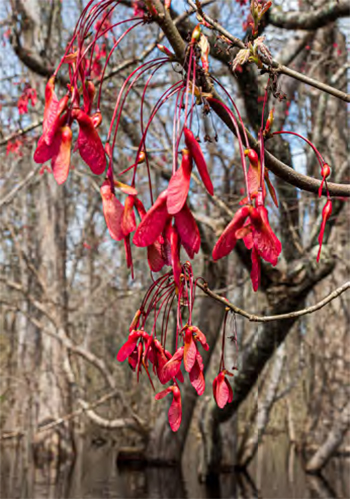 Thousands of people newly freed from slavery attached themselves to the Union Army’s infantry. As the campaign advanced, they came to be seen as “a growing encumbrance” as the Army approached Savannah. After crossing with his men, Davis hastily ordered removal of the pontoon bridges over the creek, and many slaves drowned trying to swim the swollen waters and to escape the pursuing Confederates. A historical marker erected by the Georgia Historical Society in 2010 marks this tragic event and commemorates those who perished.

Nowadays, local families own weekend cabins in the swamp and people like to fish there, but mostly Ebenezer Creek is left to the animals. The swamp supports an abundance of wildlife including gar, catfish, bass and brim. Predators like the barred owl, the marsh hawk and red-tailed hawk swoop among the trees. The calls of warblers, woodpeckers, and wrens pierce the silence. Mammals, especially nutria, make their home there and, like other swamps throughout the Southeastern United States, Ebenezer Creek is home to frogs and alligators.

Cohen says he rarely sees snakes and when he does, they’re usually harmless king snakes. 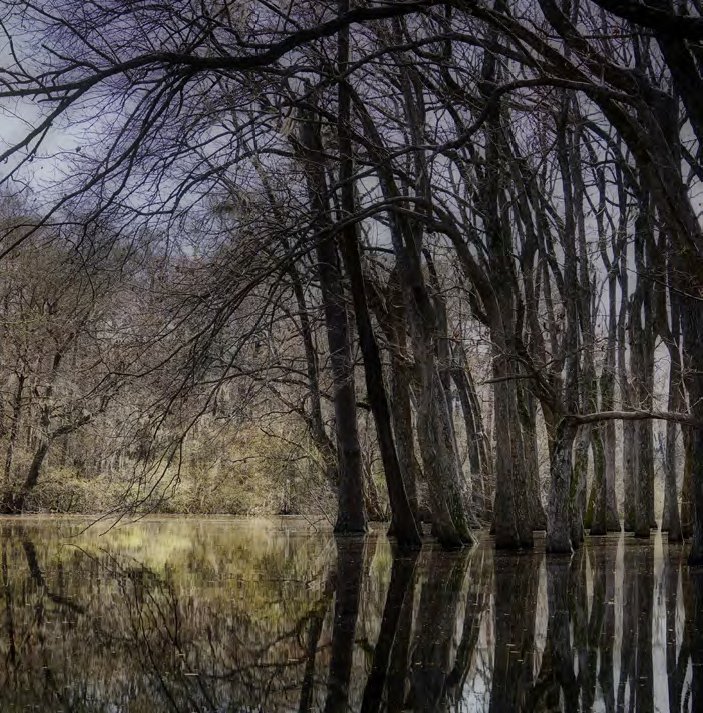 “I’ve only seen a couple water moccasins,” he said.

While it’s possible to canoe or kayak in the swamp without a guide, it’s also easy to get lost when the swamp is flooded. And knowing the conditions is essential: the water level in Ebenezer Creek is controlled by the U.S. Army Corps of Engineers, which regulates the amount of water released from dams on the Savannah River near Augusta.

Cohen, who lives “a country mile” from the Tommy Long Boat Landing where the trips depart, is proud of his company, which has been in business since 1997.

“This is a local business. It’s not a commercial ‘how-many-can-we-herd-down-the-river’ type operation,” he said. 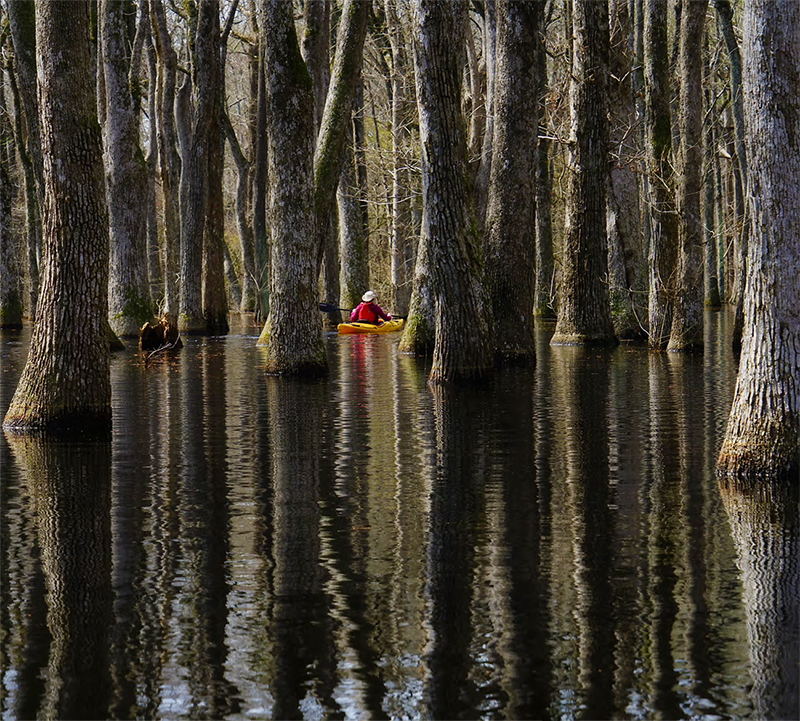 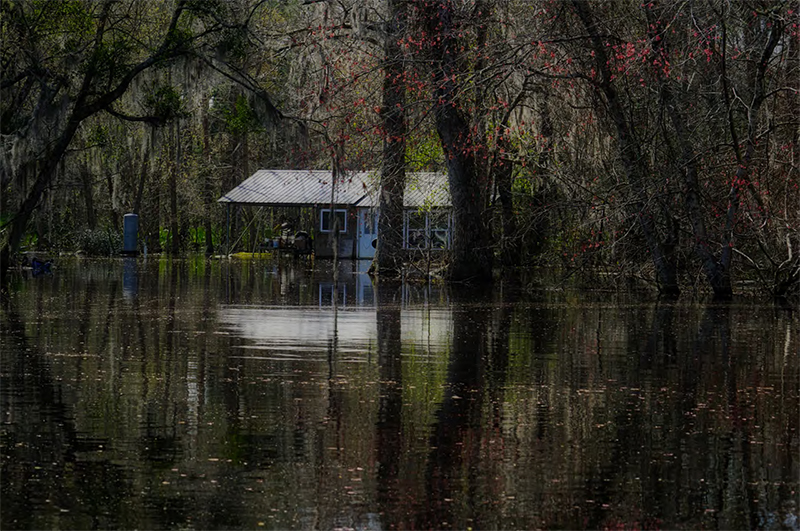