Chip Michalove has always been obsessed with sharks.

Luckily for him, there are plenty of them out in the waters surrounding the Lowcountry.

“When I started out, I thought there were two or three great whites off of our coast,” he said. “But we really have over 1,000.” 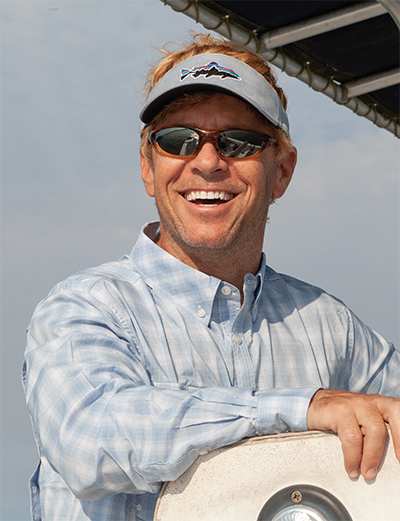 But Michalove — who set a record for catching the biggest male great white shark on the Atlantic Coast using just a rod and reel and runs Outcast Sport Fishing — is quick to assure visitors, though, that there’s nothing to fear from these giant sea creatures. Sharks can be found in off the coast of the Lowcountry in winter, migrating south from Cape Cod and even Canada to feed in warmer waters. When northern waters warm back up, the sharks make their way back home.

“They are not cruising the surf and they aren’t here in the warmer months,” Michalove said. “By the time spring break rolls around, these sharks are pretty much gone.”

His love for sharks stemmed from a childhood trip to Hilton Head Island from his family’s home in Louisville, Kentucky. His family took a fishing charter and he caught a 6-foot shark. He was hooked.

Eventually, his family moved to Hilton Head. Michalove bought his first charter boat in his early 20s, and even though he offered trips for all the Lowcountry’s best fishing — cobia, king mackerel, redfish — he made his mark catching sharks. He even went so far as to guarantee charter clients would catch a shark. He was convinced that a predator at the top of the ocean food chain was out in the depths. 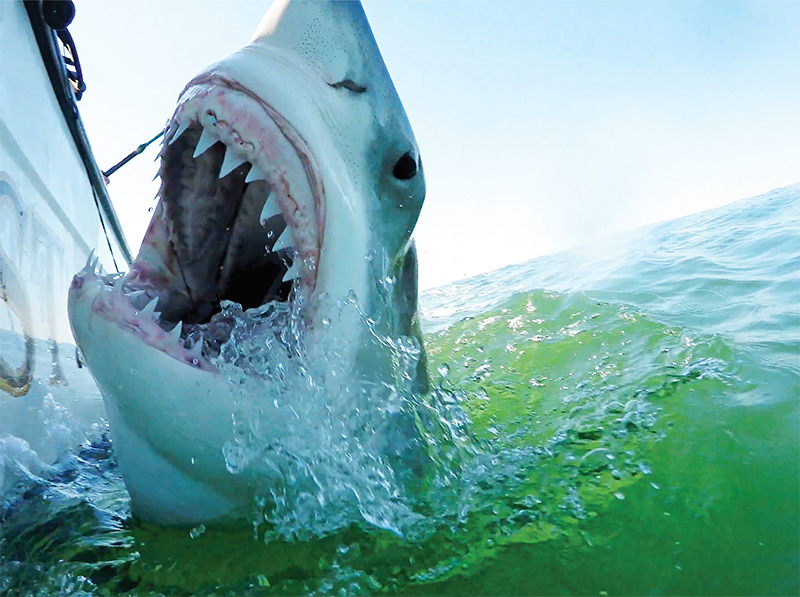 “I just wanted to be the first person to see a great white here or catch a white in the state, and we finally got our first one five years ago,” he said.

Three days after his first catch on a rod and reel, he and his crew got another. Then he caught more. Pretty soon, Michalove started piecing together migration patterns, ideal water temperatures and the right bait. After a lot of trial and error, he figured out how to find the sharks in their winter habitat and has caught more great whites on rod and reel than anyone in the Atlantic. He also holds the record for the largest male caught on rod and reel in the Atlantic, reaching over 15 feet and weighing in around 2,500 pounds.

That’s not his biggest catch, though: One rainy, windy night, he caught an even bigger one. 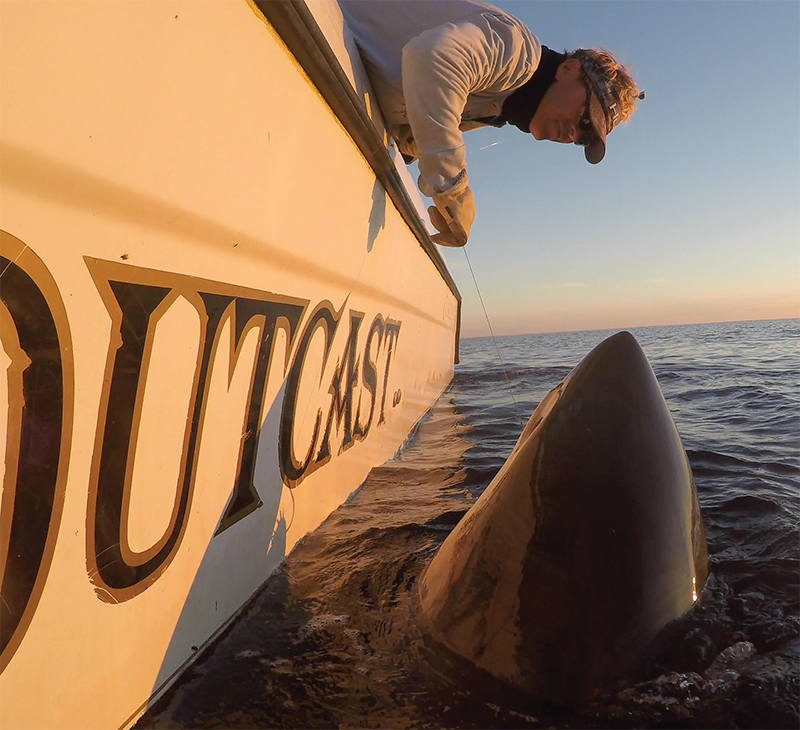 “It was a skeleton crew, only me and another girl and guy on the boat,” he said. “We hooked three white sharks that day and the largest one, a female, is still my largest to date. It was almost as wide as the boat and it pulled us through the water. It wasn’t panicked, it was just swimming.”

The scientific community has taken notice of Michalove’s shark skills. The Massachusetts Division of Marine Fisheries and the Atlantic White Shark Conservancy reached out for his help tagging sharks to track their depths, their locations, the surrounding water temperatures, and other factors.

THEY ARE NOT CRUISING THE SURF AND THEY AREN’T HERE IN THE WARMER MONTHS. BY THE TIME SPRING BREAK ROLLS AROUND, THESE SHARKS ARE PRETTY MUCH GONE.
– CHIP MICHALOVE

“I’ve watched Dr. Greg Skomal on ‘Shark Week.’ The fact that he called and asked if I could work with them has been awesome,” Michalove said.

But he’s is careful to minimize the effect of the catch on any great whites he snares. He lets the shark pick the side of the boat to come to, leaving one motor in gear and slowly moving forward to keep the shark breathing without exertion. And he tries to learn as much as possible from the shark while it’s still in the water alongside the boat. 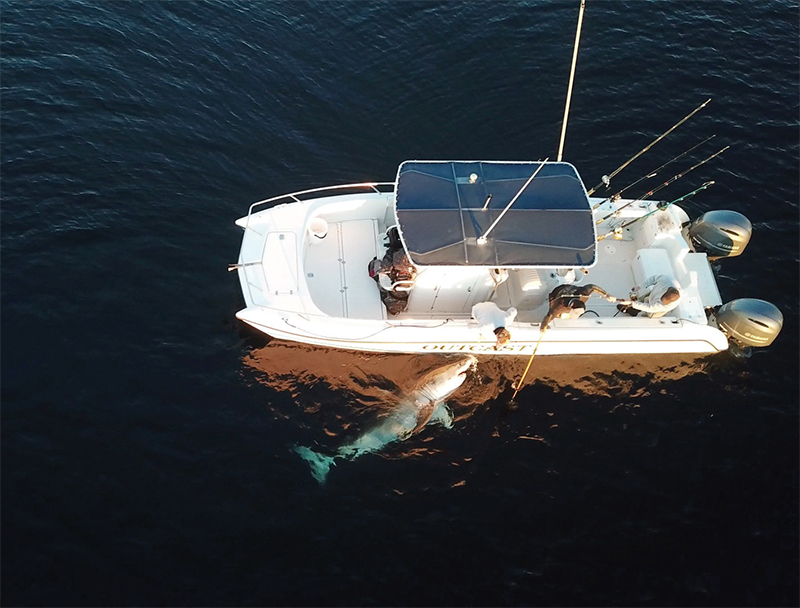 “We put a camera in the water and get photo IDs of them,” he said. “We try to get a drone up and get as much data as we can from the fish. When we are finished, I take my hand and push the nose up. I pop the hook out and push him or her on their way.”

To date, Michalove has hooked around 50 Great White sharks and tagged about 20. Shark fans can follow along the Sharktivity app, tracing the movements of sharks like Frank, a 7.5-foot male who pops up often on the transmissions.

“We are just scratching the surface” of shark research in the Lowcountry, Michalove said. “It was a fish that we didn’t even know was out there and now we are catching multiple a day of all sizes. It’s just mind-blowing.” 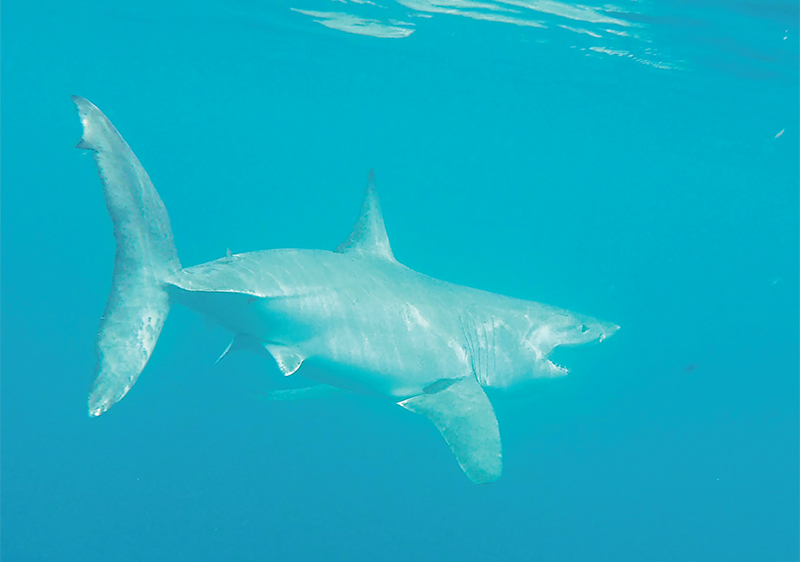