LOCAL GROUP AIMS TO BAN PLASTIC GROCERY BAGS, WHICH ARE A DANGER TO MARINE LIFE

Plastic shopping bags, a popular convenience item, may soon no longer be available at your local grocery store. And for good reason: They are especially dangerous to coastal communities because they clog waterways, endanger sea creatures like birds, turtles and dolphins, and fill landfills and trash piles.

Each year, plastic bags kill scores of seabirds that mistakenly eat them or become entangled in the trash and drown. Plastic trash, mainly bags, is found in 90 percent of seabirds, according to the National Academy of Sciences. Worldwide, seabird populations declined 70 percent between 1950 and 2010 — years that correlate with increasing pounds of plastics polluting our oceans.

Sea turtles and dolphins also often mistake plastic bags for prey. They have been found in stomachs of several endangered marine species. According to the EPA, “bags do not pass through the turtles’ digestive system and so they block their intestines. The turtles die of starvation. Studies on dead turtles have found that more than 50 percent have plastic in their stomachs.” And even if sea creatures don’t eat the bags, they can be affected by the poisonous dioxin released when the bags begin to decompose. Dioxin is a poisonous pollutant that causes mutations in marine life, putting already endangered species like sea turtles at greater risk.

Discarded plastic bags also become an eyesore. U.S. residents go through 100 billion plasticshopping bags annually, and most end up in landfills or litter our oceans and waterways. The bags can easily snag on buildings, bushes and trees, or clog waterways — becoming the perfect breeding grounds for disease-carrying mosquitoes and bacteria. A solution isn’t as easy as simply throwing the bags away; most of the plastic produced over time in the U.S. still exists, according to the EPA. Scientists estimate that plastic bags take between 20 years and a millennium to biodegrade because they are made from crude oil, a non-renewable energy source. This is becoming a serious problem as U.S. landfills approach maximum capacity — especially since large cities and states send their trash to South Carolina landfills. New York City sends thousands of tons of plastic bags to landfills in South Carolina, according to a recent article in The New York Times.

The Outer Banks of North Carolina banned plastic bags eight years ago, while the Isle of Palms became the first municipality in South Carolina to ban single-use plastic bags with an ordinance passed in 2015. The Lowcountry could be next. 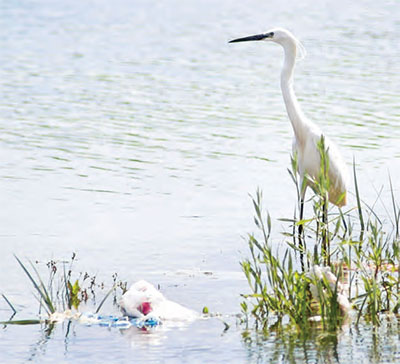 Last summer, members of the Beaufort County Natural Resources Committee drafted a version of an ordinance banning single-use plastic bags for retail checkout in Beaufort County and referred the ordinance to Beaufort County Council for consideration. After review, the council sent the proposal back to the committee for further research.

Bag bans are reaching beyond the shores of the United States, however. Governments around the globe are considering banning the bags or taxing their use. In 2014, the European Union unanimously approved a law to ban the use of plastic grocery bags, while India and the United Arab Emirates passed laws regulating plastic bag usage because of the threat to livestock – camels and cattle were choking on the litter and dying. Kenya recently imposed the toughest law in the world on plastic bags: Anyone found selling, manufacturing or carrying them faces a four-year prison sentence or fines up to $40,000.

Worldwide, as many as 1 trillion plastic bags are used each year and less than 5 percent of plastic is recycled, according to the EPA.

“The email highlighted proposed legislation prohibiting bans on plastic bags,” he said, noting he was disheartened to learn that the plastics industry has spent millions of dollars challenging plastic bag ordinances.

“The notion that the plastics industry was using their lobbying power to get a bill passed banning bans was a concern,” Caporale said. “I sent an email to our South Carolina delegation asking them to consider the issue, expressing that the Coastal Conservation League was correct and we should be voting against any such bans at the state level. State Rep. Wes Newton replied, saying the ban on bans was in his committee last year, and he killed it. But the plastics industry came back and put the bill in another state committee. He said he was surprised we hadn’t considered a ban on plastic bans like other municipalities have.”

“I did a little research and I sent an email to Rikki Parker of the Coastal Conservation League. I said I’ll go to the Natural Resources Committee and talk to the chairman and try to get the ban considered,” Caporale said.

The Natural Resources Committee researched ordinances enacted on James Island and Folly Beach, and Caporale wants the committee to identify the best data that shows the effects of ban, including costs.

“I don’t want to rush it. The ban would be considered over the next year. I want to hear scientific opinions,” he said. “Citizens will have opportunities to comment or suggest changes to the ordinance at public committee meetings. A large contingency of citizens in support of the ban attended our first Natural Resources Committee hearing on the issue Aug. 22.”

People argued that Beaufort County has a role in protecting endangered sea turtles, migratory sea birds, and miles of marshlands.

“The whole Port Royal area estuary is indeed unique to the East Coast and, probably, to the world. We tend to take it for granted,” Caporale said in a recent Facebook post addressing the plastics ban.

“You could make the argument that this is one of the most important counties not only in the United States but in the world in terms of ecology and biodiversity, so to have the council discussing this (plastic bag ban) and a way that we can mitigate risks is important and encouraging all at the same time,” said Albert George, the director of conservation at the South Carolina Aquarium, in a recent article in The Island Packet.

It seems Lowcountry residents might have to get used to shopping with reusable bags.