That’s true for women and kids, too, and a group of longtime fishermen from Mt. Calvary Missionary Baptist Church is out to teach the skill to anyone who wants to learn.

The afternoon lesson was part of the “Learn to Fish & Crab” program run by church members who want to share the bounty of Lowcountry waters with others. 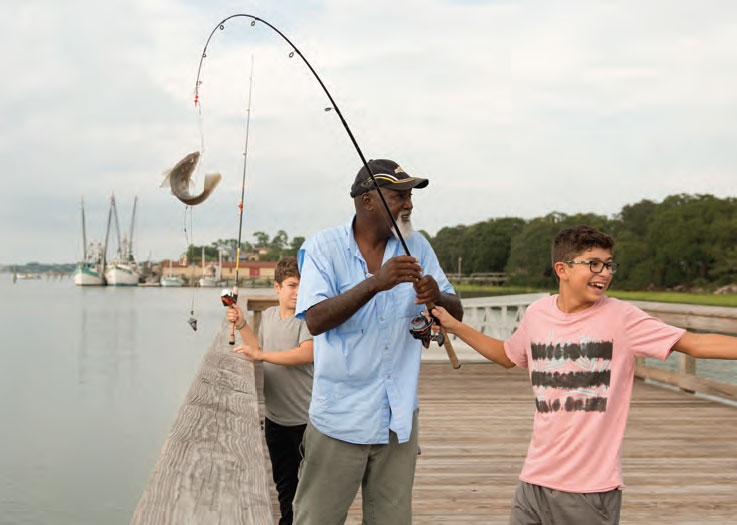 Sebastian cast the piece of shrimp on his hook as far as he could. Green showed him how to reel it in, leaving about 12 inches between the bait and the tip of the rod.  While the pair waited for a bite, Barnwell helped the rest of the group lower crab baskets from the dock, settling them on the bottom of the waterway. 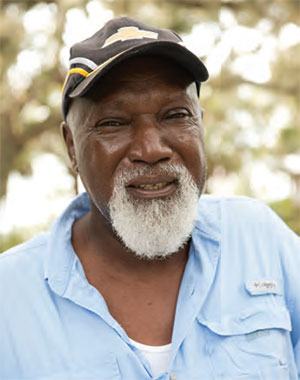 Barnwell, who grew up spending summers with relatives on Hilton Head, remembers swimming with childhood friends off a previous dock at the same site. For him, crabbing and fishing has a spiritual dimension.

“This is great for meditation. It helps you know who you are,” he said, adding that he also learned about safety on the water from the elderly native islanders who taught him how to fish.

KJ Archer and Easton Welker, the youngest kids at the Saturday afternoon session, weren’t too interested in meditating, safety or learning about their history — they just wanted crabs to crawl into their wire and net baskets.

Mitchell told them the best time to catch crab is during the last portion of the outgoing tide and first part of the incoming tide. 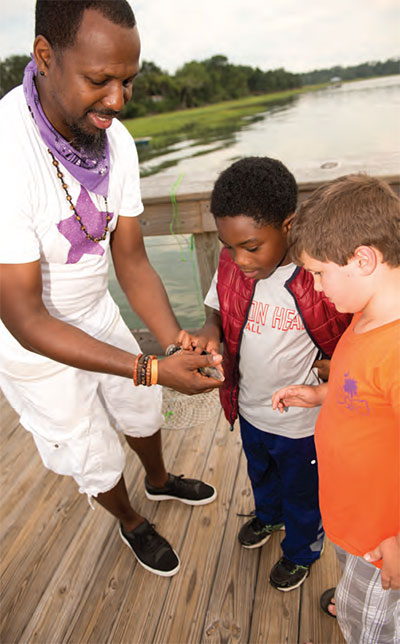 “That’s when they really start moving around,” he said.High tide, as was the case that afternoon, isn’t ideal. But luck was with the group; the crabs went for the chicken pieces in the baskets and soon each boy was hauling up a load.

Marasol Jenkins, KJ’s mom, shared her son’s excitement. It was his first time coming to the fishing clinic, she said; she learned about the opportunity from a flyer at the Boys & Girls Club of Hilton Head Island and through the Island Rec Center’s e-newsletter.

The fishing program started last year after women in Mt. Calvary’s congregation said they wanted to learn to fish, Green said. Each week, he buys bait and loads fishing poles, tackle and crab baskets into his pickup for use at the clinic. Because participants don’t need to pre-register, he encourages people who have their own poles to bring them to make sure there are enough to go around.

Leading the fishing and crabbing lessons, Green said, keeps him busy in his retirement. A veteran of the war in Vietnam and former owner of a cleaning service, he also volunteers to drive veterans to medical appointments.

But “fishing is my passion,” he said.

And at that moment, Sebastain felt something tug his line — hard.

Green coached him through reeling in the 8-inch fish, removing the hook and grabbing the twisting fish so its spiny dorsal fin didn’t pose a danger.

The whiting returned to water with a small splash — safely avoiding the fish fry the group had planned for the following Saturday. Fish frys and crab boils are occasional special events presented by the “Learn to Fish & Crab” program. Enjoyed for more than 100 years on Hilton Head and throughout the Lowcountry, these social activities and delicious meals are part of the vibrant Gullah culture still thriving today.

Over the summer, the fishing and crabbing clinic was popular with visitors. But this time of year, locals usually have the dock to themselves. The two-hour lessons start at 5 p.m. every Saturday through October. After the end of daylight savings time on Nov. 5, the fishing clinic will move to an earlier start time each Saturday, Green said.