SAY YOUR PRAYERS AND PREPARE YOUR RITES — A RARE SOLAR ECLIPSE WILL GRACE THE LOWCOUNTRY ON MONDAY, AUG. 21.

Like a Beethoven symphony, the climax will be as short as it is powerful when the moon blots out the sun for about a minute. But for three hours, the two celestial orbs will converge in a dance that has its own name: syzygy (pronounced SIS-igy). No tickets are required for this matinee performance, starting at 1:13 p.m. and ending at 4:06 p.m. However, using special sunglasses is a must (Amazon has certified safe shades starting $14).

A total solar eclipse happens when the earth, moon and sun line up so precisely that the moon steals the light we take for granted. Though it happens about every two to three years, it’s usually visible only to the creatures of the remote ocean. Not only is this a total solar eclipse, it’s the first one visible from the U.S. since 1979. To top that, this year the moon’s shadow is streaking coast to coast, starting in Oregon and ending just off our horizon. The last time an eclipse was visible from the Lowcountry was in 1970, almost 50 years ago. Miss this one, and you’ll have to wait 35 years for another viewing. It’s an event so special that all schools in Beaufort County will have the day off.

So what will you see during the eclipse? The moon will take a bite out of the sun and begin to cast a shadow here on Earth. For an hour, the sky will darken. Then, as totality approaches, only the lowest valleys of the moon’s edge will allow sunlight through, forming bright glimmers of light called Bailey’s beads. Then, viewers will marvel at the flash of the “diamond ring,” the last glint of light from the sun’s surface. Finally, for just a minute, you will experience the spine-tingling sensation of night at day. Say a prayer or an appeal to the gods. Admire the fiery glow of the sun’s outermost atmosphere, never normally visible to the naked eye. The corona, as it’s called, is made up of highly ionized iron, so hot that it belongs to a state of matter never experienced on earth — it’s not solid, liquid or gas, but plasma. It is in this bewitched minute that you can briefly remove your special shades. But once the rays peek out again, be sure to put them back on.

After passing over 14 states — Oregon, Idaho, Wyoming, Nebraska, Kansas, Missouri, Illinois, Kentucky, Tennessee, Georgia and North Carolina — the shadow of the eclipse will grace South Carolina at 2:36 p.m. Passing over Greenville, Columbia and Charleston, the shadow will leave our country’s shores at 2:49 p.m. at the Cape Romain Wildlife Preserve. Appropriately, this protected beach is miles from any development.

Though Hilton Head Island and Bluffton just outside the band of totality (which begins in Charleston), only pure umbraphiles will take issue with the slight sliver of sun still visible during the peak phase. And what better place to view the spectacle than from our gorgeous marshes and beaches amongside your closest friends and family? 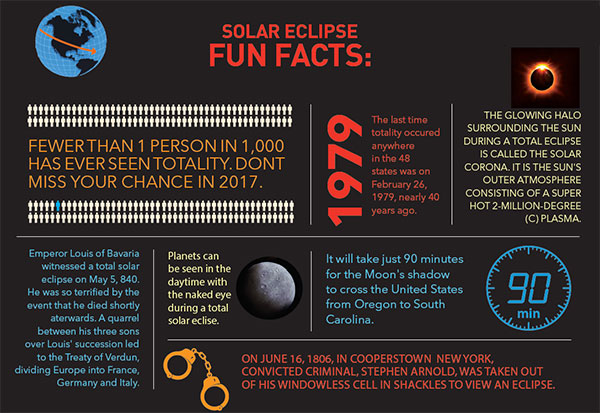 Where: An almost total eclipse will be visible from Bluffton and Hilton Head. The band of true totality begins near Charleston and ends near Myrtle Beach. The path of the eclipse through South Carolina will begin in Greenville, passing through Columbia and Charleston and ending at the Cape Romain Wildlife Preserve.

How: Order a pair of special eclipse glasses ahead of time. Pick your location, grab some libations and gather your closest friends and family for the show of the year.