A NEW CAREER AT THE BOTTOM OF THE SEA

On the fast track to success in the corporate world, Bill Eberlein earned his bachelor’s degree in accounting and economics from Penn State University, worked as an accountant and later moved into the field of information technology.

In1999, he came to Savannah for a job at Gulfstream Aerospace — and found a new interest in some of his new home’s local residents. “I met a group of divers at Gulfstream who talked about shark teeth and I remember thinking, that's the dumbest thing I've ever heard in my life. Why would anybody dive for those tiny teeth?” Eberlein said. But his co-worker brought in a megalodon tooth and he was hooked right away. “I just wanted to find one,” he said. 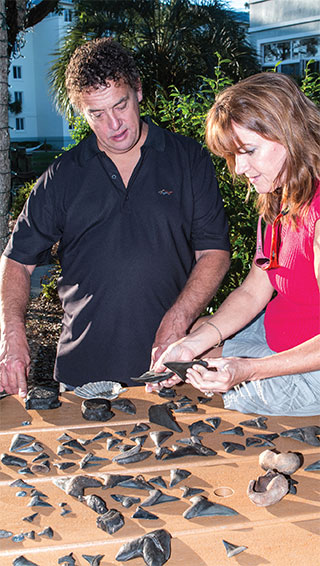 And that, his wife says, was that.

“That's how all passions begin," said Dodie Eberlein, his wife and diving partner. “He started diving for fossils all the time. He dives five days a week, two dives per day — on average, three to four days a week per year.”

All that practice has paid off. Bill can stay down for two hours in shallow water and for one hour in deeper water. His captain, a former military man, will rev the engine to let him know if he needs to surface due to lightning or other hazards. And the Eberleins dove right into his new interest, launching www.megateeth.com.

Bill’s move from the skies to the seas took him from one atmosphere to another — and sometimes, he changes atmospheres on a daily basis. One atmosphere measures 33.8 feet; he often dives well beyond that depth.

“Today, I was diving 45 feet. In deep water, I tie a line to the anchor. Then I just start feeling around on the bottom with my hands,” Bill said. His most important find to date? A mastodon jaw. “Initially, I thought it was a log. I had 3 to 4 inches of visibility. I thought there was a knot in the log, but two mastodon teeth were still intact within the jaw."

Dodie also dives with him on occasion, but Bill said it's easier for him to dive alone. He taught scuba courses in the 1990s, and still fields calls from would-be divers.

“I still get calls all the time from people who want to dive with me, but I don’t do it,” Bill said. “I took a guy out one day — he said he used to be a dive instructor, then he showed up with rental gear. I advise people to never drive alone, don't dive in murky water, and don't dive with dangerous animals. Once on a dive trip, our group had done about 18 dives and hadn’t seen any sharks, but then a fisherman nearby caught a fish and an 8-foot tiger shark appeared. A stone crab once used its claw to grab my one thumb and then he reached up and attached his other claw to my other thumb. I batted it off. Sometimes you'll grab something and it moves; it could be a stingray. Once I felt a punch to my face — enough of a punch to have a lingering effect — it could've been a shark trying to get away. I never see sharks when I dive, but I know they’re there. Usually the sharks hit you, then move away.” 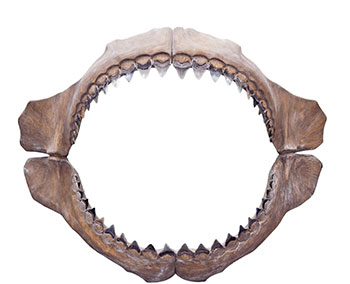 On a recent diving trip in Georgia, the current turned and Bill knew the longer he stayed in the water the harder it would be to get around. And since he usually has zero or very little visibility, he can only read his equipment with a color LED device and brings it right up to his mask in order to see it. Not the conditions, he said, for inexperienced divers.

The Eberleins still love to share their love of diving and their finds with the public, however. The couple often puts on educational exhibits featuring fossils found throughout the Lowcountry.

“Children love both dinosaurs and sharks, and (the megalodon) is a dinosaur shark,” Bill said.

However, collectors are more specific about what they want. The couple has a client who once invited them to view her collection aboard The World, a private residence-at-sea that was docked in Charleston at the time. Her collection was made up exclusively of Eberlein’s finds, and she wanted to meet him in person. Bill is also a collector and has about 20 fossils he wouldn't part with.

But it’s not just about the specimens he finds. Bill said diving has given him a new perspective on life.

“You have to love it because there are days you'll find nothing. When I have a really good day, I can't wait to get out there again,” he said. “How long do I want to do this? One day it was a horrible day — I was freezing and was not finding anything — and then I thought to myself, I’m not behind a desk so I'm thankful for this.”