For the most part, the world paid no mind to Beaufort County during the first half of the 20th Century. The little bit of industry that was here arose from nature: logging, farming and fishing.

Then the German behemoth BASF came along in the 1960s and proposed a chemical plant on Victoria Bluff on the Colleton River. That changed everything. It rallied the residents, fishermen and a development in its infancy called Sea Pines Resort on Hilton Head Island. The coalition, called Friends of the Rivers, stopped the plant. Residents and businesses have remained vigilant ever since. 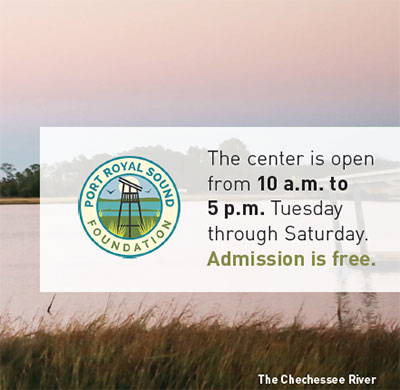 It is that effort that eventually led to the Port Royal Sound Foundation and its Maritime Center that opened in 2014 on the Chechessee River.

The foundation is “dedicated to the betterment and conservation of the waters and lands of our unique salt marsh ecosystem that is the Port Royal Sound estuary system.” The massive estuary ranges from Beaufort to Hilton Head Island and includes dozens of waterways including the Beaufort, Broad, Chechesee, Okatie, Colleton, May, New and Coosawhatchie.

As marine biologist and Bluffton native Amber Kuehn puts it, the Port Royal sound is the nursery for thousands of ocean species, from sharks to shrimp.

The importance of this area to the entire Atlantic Ocean is a big story to tell, and the exhibits at the Center tell this story. One has to see how it all fits together for it all to make sense. 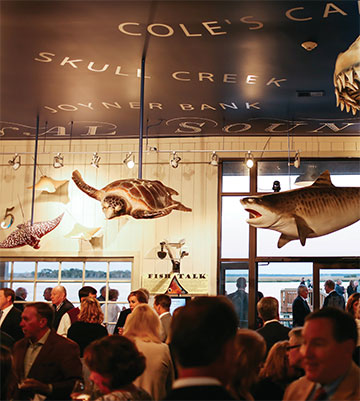 The center packs a lot into its displays. The Maritime Center has more than 20 exhibits that highlight the ecological, historical, cultural, artistic, and recreational aspects of the Port Royal Sound. The main exhibit hall showcases animals that call the Sound home: sharks, dolphins, marine turtles, and countless types of fish. A 3,000-gallon aquarium displays just some of the fish that can be found in the river right outside. The rotating art exhibit room has featured pieces by a variety of local artists. Several exhibits are dedicated to the area’s bread-andbutter: shrimp and oysters.

In the room farthest from the entrance, with assistance from a volunteer, visitors can take a closer look at live animals from the Sound in the viewing tank.

Kuehn, owner of Spartina Marine Education Charters, takes groups on water tours of the Chechessee, launching from the center’s dock.

She points out how the islands are protected by thousands of acres of marsh grasses. Powerful tides cleanse the water flowing in and out of the waterway approximately every six hours. As she puts it, small fish are forced out of the marsh grass, drawing in sharks and dolphins to feed on a buffet of fish and shrimp right at the water’s edge. 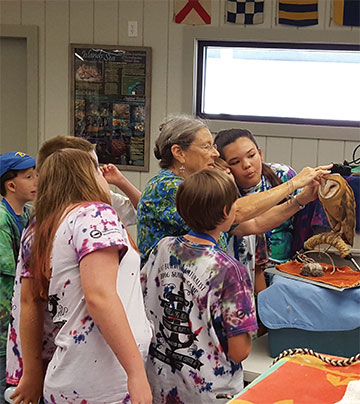 Mild winters usher in spawning season just as the water begins to warm. The confluence of all these factors creates the perfect environment to cradle all sorts of species with each generation.

It’s rare that a school of dolphins doesn’t follow the boat along, providing a visual reminder of the lives that depend on these waterways.

Kuehn points out that the biggest risk to this rich, dynamic area is us. Development fills in swampy areas or sends waves of fresh water over impervious surfaces to dilute the salt marsh estuary faster than it can be accommodated. Very deliberate planning is essential to protect the Port Royal Sound, she said.

“Our main focus is to educate people about the Port Royal Sound and help them to appreciate all that it has to offer. The Sound covers more than half of our area – and it is ours to cherish, protect and enjoy,” said Jody Hayward, executive director. 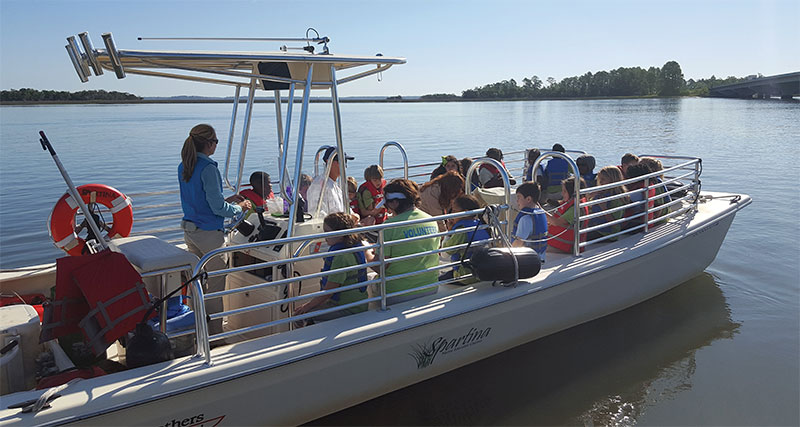 The Maritime Center, which is about a 40-minute drive from Hilton Head, is housed in the former Lemon Island Marina. Visitors can arrive by car or boat.