AN ARMY OF VOLUNTEERS FIGHT TO SAVE ENDANGERED MARINE REPTILES

At first glance, the rehab center for marine turtles at the South Carolina Aquarium on the Charleston Harbor appears to be a collection of large kiddie pools littering a basement storage room.

Look more closely, though, and one can see that inside each of the 12 or so blue fiberglass tanks is a sea turtle in different stages of rehabilitation. Most are wandering around the tank, going this way or that, and coming up for air every so often.

But one green turtle is at the surface, determinedly swimming in one spot, its forward progress thwarted by the blue plastic wall its head is firmly pressed against. 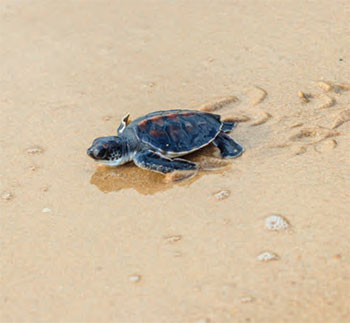 It’s a reminder that no matter how cute, turtles are reptiles — and reptiles aren’t known for their reasoning skills. Swim, eat, sleep, mate. That’s about it. Their idea of safety during sleep is to stick their heads under a rock (or in the case of tank-dwelling turtles, in a large black PVC pipe), leaving the rest of their large body exposed. Bless their hearts.

“Turtles that we’ve taken care of for months will still try to bite us. They don’t imprint to humans like mammals or birds,” Thorvalson said.

In fact, turtles don’t imprint with much of anything, including other turtles.

But despite these sea creatures’ limited personalities, thousands of humans have rallied to keep them from becoming extinct. Hundreds of volunteer networks along the coast of the Atlantic Ocean protect them at incubation and intervene when they’re found injured or sick.

All six sea turtle species that live off of U.S. coasts are protected under the 1973 Endangered Species Act signed by President Richard Nixon. Four are found in the Southeast: The leatherback, green, loggerhead and Kemp’s ridley.

There are more than 2,000 threatened or endangered animals and plants in the U.S. The U.S. Fish and Wildlife Service manages those found on land and in freshwater, and the National Oceanic and Atmospheric Administration’s National Marine Fisheries Service manages the 125 marine species on the list.

But don’t let the small number of ocean creatures on the list fool you.

“Although marine species only make up around 4 percent of the species on the endangered species list, that doesn't mean that most are doing fine. The ocean can be a difficult place to study and data about the animals there may be lacking,” according to the Smithsonian National Museum of Natural History.

An army of volunteers

Protecting nests and rescuing, rehabilitating and releasing juvenile and mature turtles requires complex coordination between the NMFS, the South Carolina Department of Natural Resources, contracted entities like the aquarium and independent marine biologists, and legions of volunteers.

In South Carolina alone, there are more than 50 turtle-nest teams from Myrtle Beach to Daufuskie Island. Each DNR-trained group of volunteers goes out every night between May 1 and Oct. 30 to look for turtle tracks. Early in the season, they are looking for large swaths of sand disturbed by a 300-pound loggerhead coming ashore to lay her eggs.

If they find a nest, the volunteers assess its safety. If it is in an area likely to be disturbed, they move it. Either way, they put caution tape around it, hoping humans, coyotes, raccoons, ghost crabs and other predators will leave it alone.

They check it nightly and after about 53 days, look for the tiny tracks left by hatchlings coming out of the nest and heading to the ocean. That’s why “lights out” programs are so important. The tiny reptiles are genetically programmed to emerge when the temperatures drop at nighttime and they head toward the brightest light, which — if humans weren’t around — would be the ocean. However, if a seaside homeowner leaves on an outdoor light, the turtles will head that way. And if they take off in the wrong direction, away from the ocean, they’ll either get eaten by predators or die of exposure.

Once those tiny, palm-sized turtles hit the waves, we rarely see them again. Short of females laying eggs, sea turtles spend their lives in the ocean. That is, unless they get sick or injured.

In 2016, 205 turtles washed ashore in South Carolina. So far this year, there have been 28 of these strandings, according to reports from the NWFS’ Sea Turtle Stranding and Salvage Network.

When a turtle stranding is reported, another network of volunteers specifically trained to respond to strandings is called upon to investigate. If the turtle is dead, they photograph it and take tissue samples for DNR, which maintains a genetic databank that can reveal more about that turtle.

If the turtle is found alive, whether on Hilton Head Island or Myrtle Beach, a trained transport volunteer drives the turtle to Charleston, often meeting a DNR officer halfway there. These trained volunteers allow the turtles to arrive at the rehab center as quickly as possible — and the aquarium is the only turtle rehab center in  the state.

“We are the South Carolina Aquarium, not the Charleston Aquarium, and want to be a resource for the entire state,” Thorvalson said.

Amber Kuehn, a Bluffton marine biologist, is one of the volunteers who responds immediately when DNR calls about a stranding. She recently transformed a 1993 Red Cross supply ambulance into a turtle rescue vehicle. The vehicle’s exterior is a rolling billboard calling attention to the South Carolina Aquarium’s rescue, rehabilitation and release program. Inside, it is equipped with medical supplies for blood or tissue samples, a work area and a webbed stretcher to transport turtles. She responds to most of the calls in southern Beaufort County.

Turtles taken to the aquarium’s Sea Turtle Care Center most commonly are suffering from bacterial or fungal infections, have ingested or become entangled in marine debris, or have been injured by a boat strike or shark bite, Thorvalson said. Of the 205 strandings in 2016, 56 were related to watercraft, according to the stranding network.

One day in March, residents at the rehab center included three green turtles and a loggerhead that had all been found floating in the creeks that crisscross Hilton Head Island.

“Because of the way long shore currents move south along the coast, sick or injured turtles are going to be pushed toward the southern end of Hilton Head Island and Daufuskie Island,” Kuehn said.

In the fall and spring, sudden drops in water temperature can cause hypothermia and shut down the turtles’ organs. The little green sea turtles from Hilton Head were floating upon arrival. Thorvalson says this is likely caused by gas buildup in the intestinal tract from undigested food.

It doesn’t matter what kind of turtle, or its size, from enormous leatherbacks to smaller Kemp’s ridleys, the aquarium does everything it can to nurse them back to health.

The facility is spending $5 million to create the Zucker Family Sea Turtle Recovery, and the rehab program will become an exhibit itself: aquarium visitors will be at eye level with the windowed tanks. They also will be able to see into the operating room and the CT lab.

Creating space for the hospital expansion was a challenge. The aquarium, which opened in 2000, is penned in by the National Park Service property that serves as the launching point for boats visiting Fort Sumter about a half-hour boat ride into the Charleston Harbor.

“We had to figure out how to expand the turtle rehab area without expanding our footprint,” Thorvalson said.

The turtles receive excellent care at the center. Biologists and veterinarians keep careful watch over their vital signs, and provide whatever antibiotics, fluids, vitamins or medicine the reptiles need. Several turtle patients have even had cataract surgery.

The aquarium staff also make each species feel at home. For example, green turtles lives among sea grasses in the wild, so black strapping is added to their tanks to create the impression of vegetation waving in the current. They add pipe platforms to mimic rock outcroppings that turtles like to sleep under and a pipe to stick their heads in so they feel hidden away from predators. Turtles can stay underwater for hours to sleep. Their heart rate slows to conserve oxygen.

Back out into the world

Once a turtle is deemed well, the aquarium releases it into the Atlantic, often with great fanfare.

“We had 2,000 people at a recent release. It’s very emotional and rewarding for onlookers, many even shedding tears to see the turtles crawl into the ocean,” Thorvalson said.

More than 200 turtles have been rehabilitated and returned to the ocean since 2000.

But growing perils await them, including increased boat traffic, masses of plastic they can ingest or become entangled in, and dramatic temperature fluctuations.

“Sea turtles aren’t fast enough to get out of the way of ships,” Kuehn said. The front half of a leatherback recently washed up near Hilton Head, cleaved in half by a huge propeller.

Turtles often are scooped up in fishing nets or tangled in gear. Commercial shrimpers are required to put turtle excluder devices in their nets. TEDs are essentially trap doors triggered by the weight of the turtle that eject them from the nets.

Climate change also is affecting turtles, particularly their incubation times and their gender.

Kuehn, who manages the turtle preservation program for the Town of Hilton Head Island, has noticed that it is taking less time for turtles to hatch. Instead of 53 days, some hatchlings are emerging at 47 days.

Fortunately, more and more people have adopted turtles as their cause, helping with nesting patrols, monitoring beachfront lights and donating to local and state efforts to save sea turtles.

Kuehn set up the Spartina Dolphin and Sea Turtle Stranding Response Fund through the Community Foundation of the Lowcountry to help with the day-to-day expense of documenting stranded sea creatures and ferrying turtles to the rehab center.

Thorvalson puts the importance of sea turtles in perspective: “As sea turtle populations decline, so does their ability to perform vital roles in the ecosystems in which they live. Losing these majestic creatures after 100 million years of existence would be devastating. Much like a sea turtle’s will to survive, we have to be tenacious in order to rebuild sea turtle populations.”

How to help the turtles

Be prepared to answer the following questions:

If the turtle is alive, please be prepared to stay with it until help arrives.