Most people think of manatees as lazily floating about the waterways of Florida. But each spring, these docile creatures get the urge to travel.

Their search for cooler waters brings them north, with many making Beaufort County rivers and estuaries their summer homes. Some migrate as far as Cape Cod, until fall and winter temperatures send them back to Florida’s warmer waters.

“Our first reports generally come in April or May,” he says. “As warm as it’s been this year, it will probably be April when we start getting some reports.”

In recent years, DNR has recorded an increasing number of public manatee sightings. Segars isn’t sure whether that increase is due to the agency expanding its public awareness efforts or to an actual rise in the manatee population. But aerial surveys by the Florida Fish and Wildlife Conservation Commission do indicate the manatee population is growing. In 2010, the agency reported 5,076 manatees; this year, that number rose to 6,620.

Manatees, also known as sea cows, feast upon marine vegetation. In South Carolina, they prefer the state’s coastal estuaries and rivers. Some also hang out in Lake Marion farther to the northwest. They are sometimes spotted in the ocean. 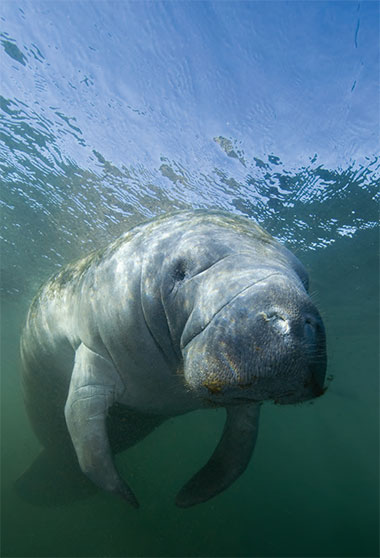 Manatees have no natural predators in the wild. Their main threat comes from humans.

Boaters at marinas have been known to water them with hoses or to feed them. Such practices draw them dangerously close to marinas and boats.

“We often identify them by the boat-propeller scars,” Segars says. “It’s almost kind of like a fingerprint.”

Some suffer mortal wounds. Segars reports that one manatee was killed last year in Shem Creek near Charleston after being struck by a boat. Another was also found dead there, but the cause of death could not be determined.

So each year the manatees’ arrival comes with an urgent warning to humans: Don’t feed them, water them or interfere with them in anyway. Otherwise, you could be unwittingly putting them in harm’s way.

“When people think they’re being friends and helping them out,” Segars says, “what they’re doing is baiting them to the most dangerous place in the world.”

DNR has posted signs at marinas cautioning boaters of the dangers facing manatees. The signs also ask the public to report manatee sightings to DNR, which uses that information to learn more about the sea cows’ whereabouts in the state.

Though humans are the main threat to manatees, they have also been helping to save the animals.

Migrating manatees need to return to Florida when water temperatures start dipping below 68 degrees. Some, however, wait too late to make the return trip, or they get trapped. That’s when SeaWorld Orlando and the U.S. Fish and Wildlife Service come to the rescue.

Last fall and winter, SeaWorld made two rescue trips to South Carolina to capture stranded manatees. Five manatees found in the Cooper River in Charleston were transported back to Florida.

A lone sea cow at Shelter Cove on Hilton Head Island had DNR concerned last summer. The sea cow swam through the pipe under William Hilton Parkway between Shelter Cove and the Palmetto Dunes lagoon system and couldn’t get back out.  It was feared the manatee would be trapped in the lagoon when water temperatures dropped. DNR monitored the animal closely and was prepared to call SeaWorld, but eventually, the sea cow escaped on its own.

Though they often swim alone, manatees are also found in small groups. But one thing is for certain, they move around a lot. One manatee that comes through South Carolina was rescued in 2015 in Cape Cod. He was outfitted with a tracking device, and last year, he returned to the same spot. 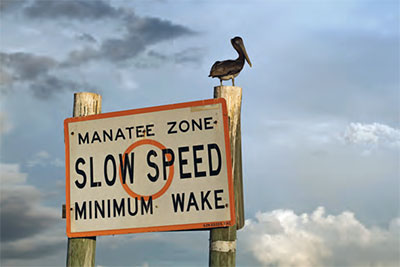 So as you hit the waters this spring and summer, be on the lookout for our friendly manatees. Let DNR know if you spot one and make sure you keep your distance. Tampering with manatees is a federal offense.

Segars says DNR typically warns violators, focusing on education rather than penalties. Most people who feed manatees are unaware of the dangers and stop once they understand the consequences.

“It’s completely innocent, but completely wrong,” he says. “… Nobody wants to hurt a manatee, but inadvertently by things we do with good intentions, we create some real problems.”

The Coastal Discovery Museum will host “Manatees in South Carolina” at 3 p.m. April 5. Al Segars, a veterinarian with the South Carolina Department of Natural Resources, will give the presentation at the museum at 70 Honey Horn Drive on Hilton Head Island. Admission is $7 per person. Reservations are required by calling 843-689-6767, ext. 223. For ages 12 and older.

When spotting a manatee: