“[The marsh tacky is] more than a horse. It represents a connection to the land and culture for South Carolinians and a way of living, surviving, and adapting to conditions that ultimately became home.” — Caroline Maffry of Equitrekking

Brought to the U.S. in the 1500s by the Spanish and found only in South Carolina, the marsh tacky was recognized in 2010 as the South Carolina State Heritage Horse because of its significant historic connection to the state.

Once considered a common sight throughout the Lowcountry, the marsh tacky is a unique breed from the Colonial Spanish line, which includes the Spanish Barb and the Cracker. Unfortunately, this breed has slowly diminished in number. According to the Carolina Marsh Tacky Association, there are only about 360 documented marsh tackies in existence today, which has put it on the world’s endangered species list.

“I think that the actual number of full-breed marsh tackies that are left is closer to about 100,” says Michael Cohen Jr., a sixth-generation marsh tacky owner who lives on Hilton Head Island. He said that the island used to be full of marsh tackies, but now they have the remaining six. The significant disparity in the projected numbers of existing marsh tackies is indicative of the controversy that exists regarding the horse. 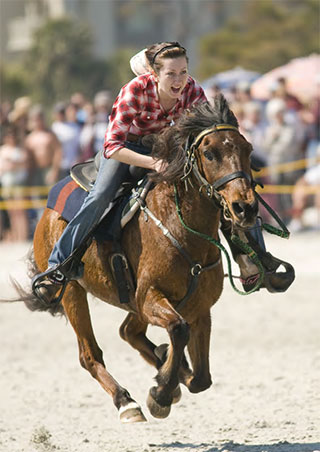 A marsh tacky has specific characteristics of height and body shape, and experts can easily tell the difference between a marsh tacky and other types of horses.

“There are a lot of mixed-breed tackies out there, but you can tell a true breed by its short legs and its narrow chest,” Cohen said. In addition, the marsh tacky has unique coloring, and can even change colors from season to season. Some of them can turn from brown to black to reddish; others from black to a deep purple.

Once feral and roaming freely by the hundreds throughout the marshes of the Sea Islands and the Lowcountry, the marsh tacky was captured and domesticated. Even in times of war, the marsh tackies served the Southern troops, providing a strategic advantage because they were specifically adapted to the rough and swampy terrain of the South Carolina region.

Considered a strong workhorse with an easy disposition, the marsh tacky became a common fixture in Lowcountry fields, especially after the Civil War, when they became a necessary agricultural and functional element within the Gullah community. The horse was used for all aspects of island living, from transportation to the fields, as well as being used for entertainment during the 1960s and 1970s, when they were raced on Hilton Head’s beaches. Eventually, however, tractors, cars and trucks replaced the tackies in fields and as a method of transportation.

“They are work horses that can out-work and out-pull any other horse. When the weather gets hot, they are ready to work,” Cohen said. “They don’t eat a lot during the summer. It doesn’t matter what you feed them when it’s hot, their bodies slim down and they are ready to go to work.”

Cohen can remember a time on the island when there were only three cars, and marsh tackies were the prime mode of transportation. After a season of working in the fields, “during the winter, people would set the horses free to roam the island, but when the warmer weather came, the horses would return home ready to plow when it got hot,” he said.

As rider Wylie Bell stated in a recent edition of South Carolina Wildlife Magazine, “They don’t panic when they get wrapped up in briars or when they are mired in a bog up to their chest. Like little bulldozers, they push through whatever you ask them to. The marsh tacky is made to handle riding in the woods and swamps. They’re smaller and more agile, their hide is thicker, and they have good, solid hooves. Marsh tackies are not big horses, but they ride big. They have huge hearts and sharp minds, and for people who own them, they’ll be that horse of a lifetime.”

The marsh tacky is an important part of not only Hilton Head’s history, but South Carolina’s. The fact that pure-bred horses have begun to dwindle in number is a sad loss of a major part of Gullah tradition.

The Cohens are doing their part to not only care for the horses and keep the tradition alive, but also to continue to teach and inform the community about the uniqueness of these beautiful horses. Whenever possible, they bring out the horses for events to remind the community of their contribution to the Gullah community.

These horses possess a unique gentle nature and incredible intelligence, and marsh tacky supporters are working hard to help preserve them and their link to the Lowcountry’s past — before the breed disappears for good.