IN EARLY MAY, THE FIRST REPORTED CASE OF ZIKA VIRUS WAS CONFIRMED IN SOUTH CAROLINA.

According to the South Carolina Department of Health & Environmental Control website, as of there have been 35 travel-associated Zika cases reported statewide as of Aug. 19, with 32 involving those who were infected abroad and one contracted via sexual contact with someone who had traveled out of the country.

“DHEC has been on the front lines addressing Zika from the moment it became known,” says Robert Yanity, DHEC public information officer. “Our employees have developed both a plan and task force, provided guidance to health care providers across the state, led multiple forums for both legislators and local government officials, given numerous interviews and updates to traditional and social media outlets, and presented at a variety of conferences.”

Though there have been cases reported in South Carolina, state officials do not believe an outbreak is likely. The type of mosquitoes that populate the Lowcountry do not carry the Zika virus — though in Florida, the virus has been reported to have spread domestically in two areas of Miami-Dade County, one of the more popular tourist destinations in the country. A total of 14 local mosquito-borne cases have now been reported in the United States, with more than 2,200 travel-related cases reported nationwide.

WHAT IS ZIKA VIRUS?

Zika is a flavivirus, similar to dengue fever, West Nile virus and yellow fever, and comes from the Zika tropical forest in Uganda where it was first located in 1947.

The virus, initially spread by the Aedes mosquito, presents with rash, headache, aching joints, conjunctivitis and fever. There is currently no vaccine or cure. The symptoms are mild, and last for a few days to a few weeks. Zika virus is also connected to incidence of Guillain-Barré syndrome, a rare nervous system disorder that can cause muscle weakness and sometimes paralysis. Zika can also be spread via sexual intercourse, from mother to child in utero, and via blood transfusions, tattoos, piercings and injected drugs. The incubation period is approximately two to 14 days.

The effects of the virus are most serious in pregnant women, causing microcephaly — or children to be born with small heads — and other severe fetal brain defects. The virus can be passed from a mother to her unborn child during pregnancy or near the time of birth.

Even those without symptoms can pass the virus to others without realizing it. Along with a travel history, a blood or urine test can be used to confirm the presence of the Zika virus in a patient.

WHAT CAN YOU DO?

“There is no treatment other than supportive care. There is no cure or vaccine,” says Dr. Amanda Parks, an infectious disease specialist on Hilton Head Island. “Therefore, prevention — i.e. mosquito repellent, long pants and sleeves, etc. — and avoidance of mosquito-prone areas are of paramount importance for couples considering pregnancy.”

According to the U.S. Centers for Disease Control, pregnant women should avoid traveling to areas with a high number of Zika cases — specifically Central America, South America, the Caribbean, Miami and some Pacific Islands — and if they have already visited one of these areas, they should consult with a doctor and get tested immediately, regardless of symptoms. 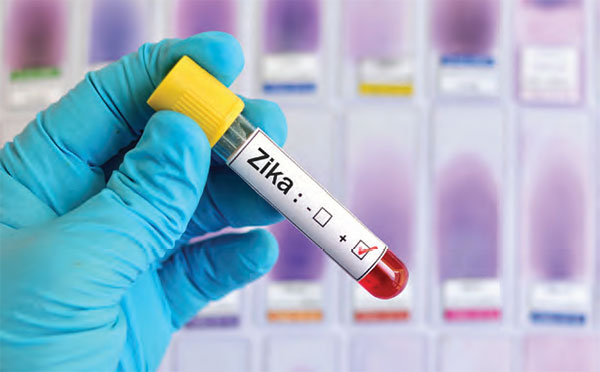 DHEC has initiated a public information campaign through its website and various social media outlets to educate citizens and encouraging them to protect themselves. DHEC also has formed strategic partnerships with school districts, housing authorities, Boys and Girls Scouts, fellow state agencies and others to continue to provide information, Yanity says.

“The best way to prevent the spread of the Zika virus is to control the insect — the mosquito — that carries it. The United States has no coordinated plan to control the insect, however, which means the burden of acting of necessity falls heavily on local governments,” says state Sen. Tom Davis, who represents Beaufort and Jasper counties in the 46th District. “Here in our community, the Beaufort County mosquito control department makes strong efforts to clean up potential mosquito breeding sites.”

For more information on the Zika virus, go to www.cdc.gov/zika or http://www.scdhec.gov/Health/DiseasesandConditions/InfectiousDiseases/InsectAnimalBorne/ZikaVirus/.