A unique attraction has quickly become a popular draw at the Port Royal Farmers Market. Visitors start their Saturdays by saying hello to the birds of Lowcountry Raptors.

Breezy the barred owl, Odin the one-eyed screech owl and Sully the red-shouldered hawk have become favorites for the kids.

But just as popular is the birds’ 10-year-old junior handler, who draws crowds as he educates kids and adults alike about the birds. Carson McDowell has struck up a friendship with both the birds and their owner, Raptors founder and bird expert Lila Arnold, and has become an invaluable member of the Raptors family.

“There are so many interesting things to know, I just can’t stop talking about them,” Carson said of his mobile master classes. “They come in so many different shapes and sizes and every species is so different, it just fascinates and excites me.” 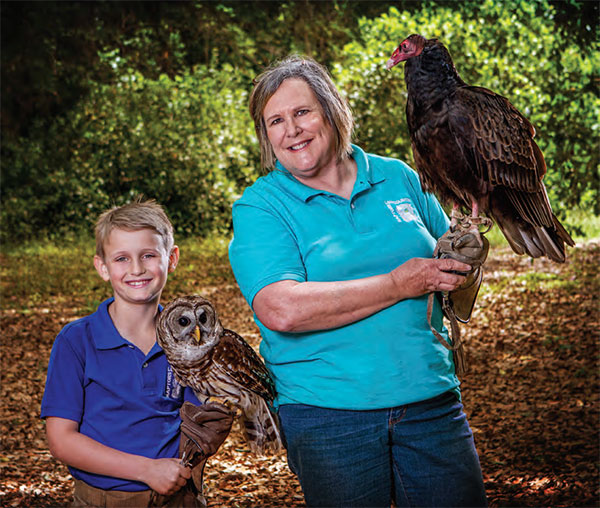 This talented fourth grader at Okatie Elementary School is an ornithological veteran — even though he’s just aged to double digits.

“When he was 1, we played a video of penguins and Carson was just mesmerized,” said his mom, Lowcountry native Aimee McDowell. “From there, we found a video that is a cult favorite among bird enthusiasts called ‘Winged Migration.’ He would watch that over and over and over again. So from that point on, we started to go any place we could see birds — wildlife centers, zoos, rehab centers — and his love of the birds just kept growing.”

This was far from a passing fancy. As Carson grew into a toddler, he and Aimee began reading every bird book they could find. His grandparents, Bill and Freddie Carson, have a summer home in Boone, North Carolina. When their grandson found out the Blue Ridge Wildlife Center was nearby, he was hooked.

“Lees McRae College runs the center and they were so welcoming to him and let him get very hands on through the years,” Aimee said. “But they, like so many other places we visited, instituted age restrictions for volunteering. Thankfully, a friend from Orangeburg Animal Control told me about Lila. I saw her Facebook page and we were both so excited to meet her.”

Arnold, a retired teacher and bird expert from Texas, bought 18 acres in Colleton County two years ago where she houses nine rescue birds. From there, she began Lowcountry Raptors, a bird rescue and education program that has steadily built up a following with schools throughout the five surrounding counties and currently does up to 20 demonstrations per month. She brings various birds to programs, including Igor the turkey vulture, a bird that Carson had gotten to know at Blue Ridge.

She said when she discovered Carson, it was like meeting a kindred spirit decades her junior.

“He has such a kind heart and patience, such a thirst for knowledge and he is so inquisitive,” Arnold said of Carson. “Most kids are into video games at his age. Carson walked up to me the other morning and told me he’d just seen the coolest video about the pacific tern and how it migrates. And he is a truly talented photographer. He has a special gift and a bank of knowledge that most adults don’t have. The kids are taken with him, but the parents are equally mesmerized.”

Carson played organized baseball and golf until recently and still plays with his family, but being Lila’s junior handler is now his main activity. “He’ll never miss it, he’s so responsible and dedicated,” said Aimee, who has become just as interested in birds thanks to her son.

“It’s so easy to take these amazing beings for granted, but there are so many wonderful things to learn,” Carson said. “Ravens are the smartest animals in the world. The falcon can fl y up to 230 miles per hour. There are just so many cool things, it’s tough to pick just one thing to tell you.”

Ask him his favorite bird and he’ll break it down by species. For condors, it’s the Andean, the largest bird in the world with a legendary wingspan second only to the wandering albatross. For hawks, it’s the ferruginous, a “really pretty rust-colored bird” and the largest hawk in North America.

His mom is grateful that she’s able to share a passion and to see her son blossom and grow his gift for bird handling.

“As a native, it’s so easy to take our natural surroundings for granted,” she said. “Carson has taught me all the wonders that are around us every day.”

Arnold said the budding expert thanks her for allowing him to be with the birds each time they’re together, but she’s the one that’s grateful.

“We are a small group and Carson has been a Godsend, both in helping me in education programs and in spreading the word about our birds,” she said. “Letting kids around birds, it’s not common, but Carson is far from common. He steps right up to the perch, leash on his glove and gives the command to step up like a veteran. He is a full-fledge member of this program now, so I am the one who is thankful.”

Arnold said she could see Carson working for National Geographic one day. As much as Carson loves learning new facts about birds, he sees himself headed toward more of a handson career like bird rehabilitation.

“Ornithology, it’s just studying the birds. I want to be close with them and help them,” he said.

As for his work with Lila and the Raptors, he wants to teach everyone in the Lowcountry how they can help the ecosystem thrive.

“You throw a banana peel out your window thinking a chipmunk will get it. But you’re attracting mice, which then attract falcons. The falcons flies low where they are not used to and they get hit on the road,” he said. “We throw gum out, and before it disintegrates, it looks like a worm to a song bird, and that bird gets the gum stuck in its beak and can’t eat. Never use lead shot for guns, use steel. Lead gets in the lake, poisons fish ducks and turtles and kills the ecosystem. A bald eagle ate a dead squirrel shot by lead and died because he ingested the lead.”

And Carson said to never underestimate any creature, even those often dreaded turkey vultures.

“Vultures clean up our roadways; they only eat dead animals. Some people may see them as a nuisance, but if that carcass washes into the river, it can pollute the water supply,” he said. “They are not rats, they’re nature’s trash men.”

It’s all very adult knowledge, but behind that gifted brain is still an adventurous boy whose favorite bird to handle changes constantly.

“He’ll go from Odin to Breezy and now, Sully is back and his new buddy,” Arnold said. “Watching him, it brings out the kid in me every time.”

HOW TO HELP THE LOWCOUNTRY RAPTORS

Lowcountry Raptors founder and bird expert Lila Arnold said she is constantly trying to spread the word and is always up for adding new schools for programs. To book a visit, go to www. lowcountryraptors.org, call Arnold at 843-908-3235 or email lowcountryraptors@yahoo.com. You can also visit the Raptors’ Facebook page and contact Arnold via direct message. Donations are accepted via the Raptors’ website, and the organization is always grateful for financial assistance in helping nurse birds back to health. Arnold is currently trying to bring in an American kestrel falcon from California with a fused shoulder and a wing that won’t open and a merlin falcon with a double break in its ulna — one of which Carson will be responsible for nursing back to health. The cost to transport the birds cross-country is $250 to $300 per bird.