I have always believed that people care and act with good intentions. Some are overly confident, some are very cautious, and some are just completely unaware. And, unfortunately, there is the occasional blatant disregard for wildlife. Either way, a little bit of consult and public education is always the best option. Enlighten yourself with these suggestions and help us to save endangered sea turtles.

DO NOT DISTURB NEST SITES, MARKED OR UNMARKED

Occasionally, curious people dig into an area that is surrounded by three PVC poles, orange flagging and stickers or signs that say “Protected by federal law,” “Do not disturb” and “Do not remove.” Curiosity motivates them to touch the eggs and handle just the few eggs at the top of the chamber.  Covering them back up makes it all good, right?  Actually, when the eggs are handled or rotated after the first 24 hours of incubation, the embryo detaches from the inside of the egg shell and will stop developing. Reburying them will just make it more difficult for the hatchlings below to escape from the nest when they are ready to emerge. This is a federal offense, and an example of blatant disregard for our wildlife. 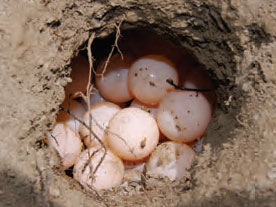 Some will take it upon themselves to mark nests if they believe that the sea turtle patrol has missed a nest or is not responding in an appropriate manner. A recent situation involved poles being removed from other nest sites and inserted into the unmarked nest site. A sea turtle nest is not as easy to find as you may think. In this case, the predicted location of the unmarked site’s nest chamber was inaccurate. It is dumb luck that kept the PVC poles from entering the actual nest chamber, destroying the eggs. Fortunately, when the sea turtle patrol arrived, they found that the actual nest chamber was just behind the marked off area and remained intact. This is an example of how overconfident beachgoers can cause harm, even when they’re acting with good intentions. 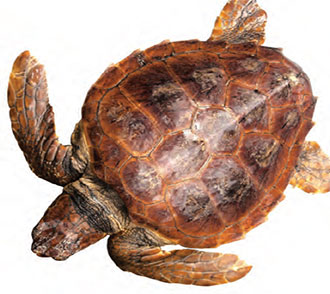 FILL IN HOLES ON THE BEACH

Holes on the beach are becoming more and more overwhelming. Enormous holes will remain on the beach until someone actually fills them in. These holes often are above the high tide line and serve as obstacles and traps for female sea turtles approaching the beach to nest. If they manage to avoid falling in one of these holes, they’re often frightened and abort their mission to deposit their eggs on the beach. Even worse, hatchlings making their way to the sea sometimes fall into the holes and are doomed. This is an example of being unaware of the effects of your actions.

There is a lighting ordinance on Hilton Head that was established in 1990. During the sea turtle nesting season, which runs from May to October, exterior lights should be off from 10 p.m. to 6 a.m.  Nesting females will avoid lit areas to nest, but more importantly, hatchlings will be attracted to the porch light instead of the moon reflecting on the ocean and will crawl away from the water. In 2015, 21 nests full of hatchlings were lost for failure to flip the switch. That’s more than 2,000 hatchlings. I am going to give the benefit of the doubt and call this one an example of unawareness. I am assuming that most visitors have no concept of the tragedy they have caused.

WHAT CAN WE DO TO HELP? 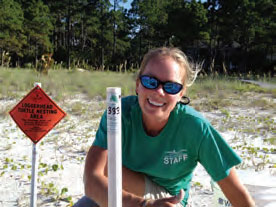 If you are on the beach and overhear a conversation about the nests, pipe up and make sure visitors are aware of the lighting ordinance. It will be particularly important this year because of the beach renourishment. About 99 percent of the nests on Hilton Head will be relocated to the areas between beach markers 22 and 52 and beach markers 98 and 116. These areas are within the zones that will not be experiencing beach renourishment this season. The concentration of nests will be high in these areas, so you can imagine the devastation if 10 nests hatch in the same night in front of one porch light shining all night long. That is approximately 1,000 hatchlings lost in one night. We can avoid this by spreading the word and focusing on public education. We get a new public every week!

The Coastal Discovery Museum will be placing shovels decorated with sea turtles and a message to “SAVE SEA TURTLES, FILL IN HOLES” near lifeguard stations in the nesting areas to encourage children and their parents to perform eco-tourism and get something positive done for nature while on vacation.  If you have a teenager who needs service or volunteer hours, please email HHISeaTurtle@gmail.com for massive hole and shovel locations.

You may also join us for “Turtle Talk” presentations from 7:30 to 9:30 p.m. every Tuesday, Wednesday and Thursday in June, July and August at the Sonesta Resort Hilton Head Island in Shipyard. For more information and to register, call the Coastal Discovery Museum at 843-689-6767. 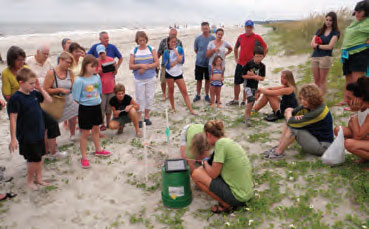 Some members of the Women’s Club of Sea Pines have joined to form a group called Turtle Trackers. There are about 30 members and they have been very active in promoting awareness for the 2016 sea turtle nesting season. They have organized informational sea turtle presentations within Sea Pines, approached The Island Packet for front-page coverage, organized WHHI-TV interviews concerning the nesting season, and continue to distribute informational rack cards and “LIGHTS OUT” door hangers to remind residents and visitors to flip the switch at 10 p.m. The group will be on the beach this summer in the areas that are zoned for sea turtle nest relocation to answer questions concerning the nests. I came to the Women’s Club for help because their community will host most of sea turtle nests on Hilton Head this season, and they responded. This is an example of being helpful — extremely helpful.

It’s May and I am excited for what the next six months will hold. Every year for 18 years, I live for sea turtle nesting season commences and I feel purpose. I provide a service to nature that energizes me.  I am inspired.

The first sea turtle nest appeared on Hilton Head today at Burkes Beach. It will be the first of hundreds and we will watch over it for the next two months until it hatches. The weather is warming fast, and beachgoers are filling the sand. They are leaving massive holes behind at the end of the day. This may cause problems for the sea turtles that encounter them.

The beach renourishment on Hilton Head is moving forward, beginning with Mitchelville Beach. Large bulldozers and pipes are being positioned to prepare the beach for sand pumped in from offshore sandbars starting June 15. I’m a little worried about what the sea turtles will think about the noise and activity.

A loggerhead nested at 10 a.m. This rare daylight emergence was a spectacular site for those who were able to observe. Residents made sure that onlookers kept a safe distance and the lifeguards notified the sea turtle patrol. The nest was laid in a great spot and will be attended to on patrol tomorrow morning.

A concerned resident marked the nest for us by removing poles from other nests. The nest site was not within the marked area and I am so relieved that the poles did not penetrate the nest chamber.

Sea turtle nesting season is progressing beautifully, despite Tropical Storm Bonnie. Two days of rain and the visitors have had an unexpectedly wet Memorial Day weekend. The sea turtles do not seem to care about the storm; we found four new nests today. There are 70 nests altogether on Hilton Head. Still no nesting on Mitchelville Beach.

The 2016 sea turtle season has already proven to be challenging. Visitors and residents are becoming unusually involved with the day-to-day monitoring of the beach. Some of them are helpful, but some of them know just enough to be dangerous. And my job is to keep it all together.