IDENTIFYING THE AREA’S MOST COMMON VENOMOUS AND NONVENOMOUS SPECIES

I picked up the magnificent snake by the tail, admiring its bold pattern and shiny skin. The serpent had a glossy black hue, yellow bands and a dusting of minute chartreuse speckles.

As I held it lightly in my hands, the reptile contorted its body and writhed from side to side. I did not realize what was happening until it regurgitated a partially digested, three-foot-long rattlesnake onto the grass.

Captured snakes will often empty the contents of their stomach, presumably to aid in escape from predators. I realize to some this would have been a grisly scene, but I was positively delighted. I had often read that harmless king snakes kill and ingest other snakes — including venomous pit vipers — but this was proof, right in front of my young eyes. It doesn’t get much better than this for a kid who wants to grow up to be a professional naturalist.

Most people are not nearly as fond of snakes as I am, but reptiles can be found in almost every habitat in the Lowcountry.

We are fortunate to have the snakes that share our woods, wetlands and yards. Most of the snakes that people encounter are nonvenomous species and are completely harmless to people and pets. All snakes are valuable members of the food chain, serving as both predators and prey and can be indicators of a healthy environment.

Even if you are uncomfortable having snakes around, snake-proofing your yard is unrealistic and probably impossible. There are a variety of companies that manufacture snake repellents, but these products are not very effective. To avoid a bite from a venomous snake, be cautious when working in your yard. Keep pathways around your house clear of debris so you can see camouflaged snakes, and wear shoes when walking outside, especially at night.

Venomous snakebites are actually relatively uncommon and typically occur when people encounter a snake and try to catch or kill it. In the unlikely event that a venomous snake bites you, call 911 or have someone drive you to the hospital. There is no reason to capture or kill the snake, but it is important to know if the snake is a coral snake or one of the five pit viper species.

If bitten, do not attempt first aid like tourniquets, incisions or sucking the venom out of the wound, as these actions may make the situation worse. If your dog is bitten by a venomous snake, call your vet immediately. Many dogs survive snakebites with proper treatment.

Here are a few common nonvenomous species that occur in our area: 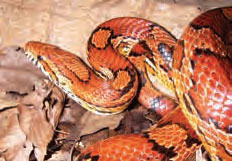 The corn snake may get its name from the maize corn patterns that adorn its bellies, or perhaps the name stems from the snake’s habit of visiting cornfields or grain stores in search of mice. No matter what the origin of the name is, the corn snake’s dazzling color and intricate patterns make it popular in the pet trade. In fact, corn snakes from the Lowcountry are arguably among the most beautiful snakes in the world.

The rat snake is one of the longest snakes in Southeast, with some exceeding 7 feet in length. Although they get big, these snakes do not pose a threat to people. They vary in color and pattern throughout the state. Adults found in inland regions may be dark gray or black, with only traces of a lighter pattern, or yellowish and heavily striped here in the Lowcountry. Rat snakes are powerful constrictors, suffocating rats, birds, squirrels and even young rabbits and swallowing them whole. Since they are adept climbers, they often venture up the sides of barns and houses and into the tree canopy.

King snakes are arguably among the most handsome of all snake species. All king snakes are nonvenomous constrictors that feed on snakes, rodents, birds, lizards and even turtle eggs. The king snake’s real claim to fame is its ability to kill and eat other snakes, including pit vipers like rattlesnakes, copperheads and cottonmouths. Because of their natural immunity to snake venom, a snakebite has little effect on them.

Because green snakes are supremely camouflaged, they are rarely seen in the dense foliage and vine thickets where they live. Green snakes are excellent examples of form following function. Their bodies are long, slender and beautifully designed for a life in trees or bushes. They eat a variety of insects and spiders, which they capture and swallow alive.

Although these snakes are fairly common in our area, they seem to always be hidden from view. They spend their days in rotten trees or underground, moving over land at night. They are usually found in pine habitats, but will occupy other areas including yards and vacant lots. Occasionally, they are unearthed by people working in their yards, and they’ve even been found in the swimming pools of local neighborhoods. Scarlet kings resemble the venomous coral snakes and may receive protection as mimic species.

Here are all six venomous snake species that live in the Lowcountry:

Copperheads are by far the most common venomous species found in the Lowcountry. Like other pit vipers, they are equipped with venom glands and fangs. They feed on a variety of small mammals, birds, lizards and insects. Copperheads have exquisite camouflage and are almost invisible when resting on the forest floor among fallen leaves.

Although they are spectacular snakes, canebrakes should be respected and viewed from a safe distance. The bite from a rattlesnake can be extremely serious needing prompt medical attention. The good news is that these snakes will not attack or chase a person. In fact, many canebrakes will not even rattle or strike when first encountered, choosing instead to crawl away from danger. If threatened, many individuals will coil, rattle and strike to defend themselves.

Diamondback rattlesnakes have an undeserved reputation as cold-blooded killers. They are, in reality, important members of our local ecosystem, just like other animals. They feed on rodents like rats and rabbits and serve as natural pest controllers. Their venom is designed to catch food, but when used for defense against people, it can be very dangerous. Most herpetologists think that diamondback populations have declined drastically and conservation measures may be necessary to protect them.

The coral snake is the only elapid (cobra relative) found in the Lowcountry. Coral snakes spend much of their lives underground, occasionally surfacing to capture small snakes and lizards. They are relatively small snakes rarely reaching 3 feet long. Coral snakes have small heads and short fangs and have difficulty biting through shoes or boots — but they should never be handled because bites are extremely dangerous.

Cottonmouths are extremely common in the freshwater wetlands of the Lowcountry. These snakes are highly variable in coloration, but they are usually plain brown or olive with darker blotches or bands. Cottonmouths average about 3 feet long and are very stout-bodied. They can be distinguished from harmless water snakes by the shape of their heads. Cottonmouths have a large wedge-shaped head and elliptical-shaped (cat-like) pupil in the eye. 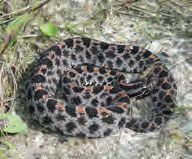 When coiled on the forest floor, pigmy rattlesnakes aren’t much bigger than a pinecone. These snakes have a small delicate rattle that is not much wider than the tip of the tail. When they vibrate this rattle, it sounds very much like an insect buzzing. Although they are small, “pigmys” are pretty feisty and will often strike if molested. Fortunately, these snakes have small venom glands and don’t inject much of their potent venom when they bite. There are no records of any person dying from the bite of a pigmy rattlesnake. 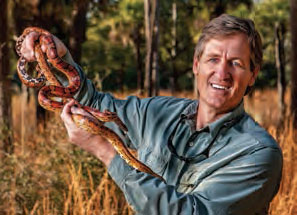 Tony Mills is the education director of the LowCountry Institute on Spring Island. He writes and hosts “Coastal Kingdom,” a nature-based television program about Lowcountry wildlife. He also co-wrote the book “Lizards and Crocodilians of the Southeast.” Although he spends much of his time teaching and writing, he continues his extensive field study of animals. Past research trips have taken him on excursions into the jungles of Mexico and Costa Rica to conduct studies on snakes and lizards and into the Everglades of southern Florida to collect introduced pythons and endangered crocodiles.