THEY MAY BE CREEPY, BUT BATS ARE ALSO CRUCIAL TO THE HEALTH OF OUR ENVIRONMENT. WITH A DEADLY FUNGUS WIPING THEM OUT BY THE MILLIONS, WHAT DOES THIS MEAN FOR US?

Much in the same way the streets of Gotham City swarm with criminals, so do the skies of the Lowcountry swarm with bloodsucking biting pests. Mosquitos, no-see-ums and their welt-raising ilk are inevitable down here during the outdoor season.

Swooping down from the night sky on leathery wings that cut the air in silence, bats devour their prey in huge quantities (a single brown bat can take out just over 1,000 mosquitos in an hour), filling their bellies with the parasitic pests that have ruined many a barbecue hereabouts. If it weren’t for the constant presence of bats, we’d be swarmed constantly. That is to say, even more so than we are now.

Bats are that important.

Which is why you should be a little concerned that they all seem to be dying.

When Rob Mies discusses the dramatic decline in the bat population, he does not do so lightly. He does not try to incite a panic, and he’s very clear about the limitations of sample sizes, testing methods and more. With a clinical detachment that belies his lifelong passion for the winged mammals, he explains simply that last time he checked the Lowcountry, he couldn’t find many brown bats.

“When we went out and captured, one of the most common captured was a Seminole bat. … What we didn’t catch many of was Myotis bats. Those are the little brown bats, sometimes called the Southeastern bat. We caught almost no Myotis bats,” he said, describing a recent series of nettings held around the Lowcountry during the Southeast Bat Diversity Network’s “Bat Blitz.” 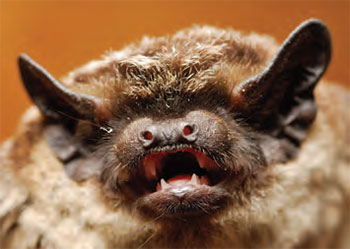 “We net one area one night and if we have a low capture rate, we don’t assume there are no bats around. Unfortunately, if we compare to historical data, even within our own time, 10 to 20 years ago, we do have lower populations of some bats,” he said.

Mies is an authority on bats, so his words carry some weight. The founder and executive director of the Organization for Bat Conservation, Mies tours the country educating people on the importance of bats for the local ecosystem. And lest you think it’s all numbers and data and sampling methodologies with him, we would direct you to check out some of his hilarious Conan O’Brien appearances on YouTube.

Mies lives in Michigan, but made an appearance at the Coastal Discovery Museum while he was in town for the “Bat Blitz,” which was held at Palmetto Bluff. It was during this time that he and around 100 of his fellow Batmen and Batwomen trekked around the Lowcountry, throwing up giant nets in hopes of assessing our bat population. (These nets weren’t deployed from a utility belt, but scientifically speaking, Mies agrees that would have been awesome).

And, as mentioned, the prognosis on Myotis bats was dire.

What’s worse, there doesn’t seem to be much we can do. The usual suspects — clearing of natural habitat to make room for condos, golf courses, and shopping centers; increased use of pesticides — certainly aren’t helping the cause. But they’re not the real problem.

To speak clinically, Pseudogymnoascus destructans is an invasive fungus introduced at some point from Europe. The fungus was first detected in 2006 in Schoharie County, New York, and quickly spread throughout the Northeast among the bat population. In the Northeast alone, bat populations have dropped 80 percent, a loss of millions of bats, since the first case of what bat experts call white-nose syndrome was confirmed.

“It grows on bats during the winter when they’re hibernating,” Mies said. “It changes their metabolism, and wakes them up too many times. The result is they starve before winter is over. Some species are affected more, some are affected just a little, and some not at all. Some have been put on the endangered species list.”

And while we may not have the winters down here they have up north, our bats do still hibernate. And they are still affected by white-nose syndrome. And it is taking a vicious toll on their numbers.

“We would have caught a lot (of brown bats) 10 years ago. Because of White Nose Syndrome, we’re not surprised we didn’t catch many,” said Mies. “This fungus is causing some pretty big problems.”

On a purely superficial level, those pretty big problems will most immediately be felt by anyone who ventures outside with exposed skin. As bat populations plummet, mosquito and no-see-um populations explode, freed from the interventions of their only natural predator. It’s what happens after that we should be scared of.

“What are we going to do? We’re just going to spray a lot more pesticides. That’s not good for us or the environment,” Mies said.

Pulling the focus back to the national level reveals an even scarier picture. “If we have to pay somebody to kill insects when bats do it for free, that’s going to bring the cost of food up. For families who struggle, it’s going to be even harder. It really will affect our overall health,” Mies said.

There is hope, though. Research continues on options for treating white-nose syndrome, and in the meantime you can do your part by creating a “batcave” of your own. A bat house is relatively easy to build and install in the backyard, and in doing so you not only give a bat a safe place to live, you get a backyard where mosquitos fear to fly.

“Bat houses are one of the best things you can put up,” Mies said.

And if you want to install a tiny little Batmobile in there, all the better.