FAR AS THE EYE CAN SEE, the sand shore runs 20 miles along the seaside on Hilton Head Island. “The beach,” as we call the flat, surf and tide-washed, pearl-colored, shellstrewn, stream-riddled, shorebird refuge and place of play for people on Hilton Head Island, is not one place. It is a seamless strand of seven beaches stitched together on the outskirts of this foot-shaped isle. Each shoreline is sculpted by distinct natural forces, and significantly altered by human history. Every beach holds its own secrets, including buried treasures of sorts. You can unearth these secrets — but you need to know where to look. 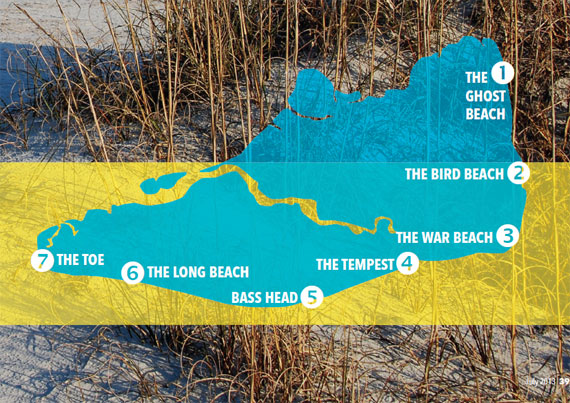 Dolphin Head is the narrow shore on the northern tip of Hilton Head Island. Facing Port Royal Sound at the edge of Hilton Head Plantation, this weatherworn beach guards the spirits and places gone by. Over the centuries, what is now beach once held fields of fluffy Sea Island cotton on the 1,000-acres Myrtle Bank Plantation. Its owner William Elliot drowned in the tumultuous current along this shore. Over the centuries, the Sound has relentlessly chiseled away the beach.

At low tide, beach walkers can safely explore most of Dolphin Head. There are many skeletons of nature here — sun-bleached live oaks and pines, clusters of dislocated oysters, colorful branch-like sea whip corals. Once I even picked up an 18th Century British coin on this beach. Just offshore of the stone sea wall that hopes to hold back the sea, you may see a lump of oysters in a tidal pool. That’s a footing from plantation home — another ghost exposed by the relentless sea.

Fish Haul Creek Park, located near the end of Beach City Road, is your gateway to the best bird-watching beach on Hilton Head Island. The Town of Hilton Head Island has preserved the upland forest, salt marshes, and a narrow but lively strand of shoreline. Fish Haul Creek, a curling tidal inlet, trickles into Port Royal Sound. The fusion of waters has melded a beach rife with tidal pools, rivulet creeks and driftwood. The Fish Haul Creek Beach is a haven for wading birds and migratory shorebirds that feed and rest in the Fish Haul flats during winter and spring migration. You can access this remarkable beach from the Fish Haul Creek Park (a short walk) or from Driessen Beach Park, Bradley Beach Road (about 3 miles each way).

There is a specific point of land named “Hilton Head.” This is the heel of the foot-shaped Hilton Head Island. It is the eastern-most point of land, and it has tons of history, literally tons. The beach is the easternmost point of land that protrudes into the junction of the Atlantic Ocean and Port Royal Sound. This headland attracted the attention of young sea captain William Hilton, who explored the ambient waterways in 1663 and reported the potential for settlement and agriculture on this island. Mapmakers naturally named this point Hilton’s Head, and eventually edited out the apostrophe.

Because two waters influence the shoreline, Hilton’s Head beach is composed of wide tideflats on the ocean side, and a narrower, erosion-prone  beach, striated with runnels (long tidal pools) on the Sound side. The nexus of the two seascapes makes for good birding and shell collecting. But through the centuries, this beach has attracted more than birds and beachcombers.

The Hilton’s Head promontory gained military importance in at least two U.S. wars. On Nov. 7, 1864, a flotilla of U.S. Naval warships anchored in Port Royal Sound and attacked Confederate defenders in Fort Walker, built at the Hilton’s Head promontory. Within hours, the fort fell and federal troops invaded across the tidal flats. Over the next half-decade, the Union forces constructed a major port at the site, and directed the blockade of Southern waters and the invasion of interior lands in the South Carolina Lowcountry.

During the Spanish-American War, American troops return to the Hilton’s Head War Beach and manned an artillery defense post on this site. The steam-powered “dynamite cannon” was test fired, but never saw action. Intrepid beach walkers can still see the concrete footings for the cannon covered with sand and prickly dune vegetation.

Every beach is a dynamic nexus of currents, tidal flow and waves. But no beach site on Hilton Head Island is more tempestuous than the shores at Folly Creek, which bisects Burke’s Beach and Collier Beach. The inlet channels strong tidal currents into and out of a bowl-shaped salt marsh, just south of Palmetto Dunes. This process rejuvenates the wildlife-rich wetland, and at the low tidal cycle exposes shoals and mudflats that attract wading birds, shorebirds, and people harvesting shrimp and fish.

Unlike other beaches, The Burke’s-Folly-Collier Beach is not a swimming beach. The rip and undertow currents are too dangerous and unpredictable. Enjoy the sun and the wildlife — but only cross the creek at dead low tide. 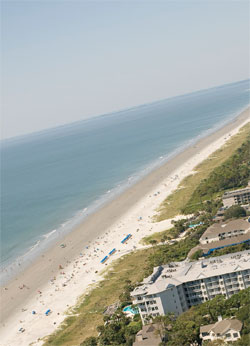 If Hilton Head Island is shaped like a foot, then the beach named Bass Head is a fallen arch. This wide promontory gradually arches seaward from the Folly Field-Palmetto Dunes-North Forest Beach area. For eons, Bass Head has been one of the most rapidly eroding sites on Hilton Head Island. Check Google Earth and you will see why. Aerial photos show how roundish Bass Head juts into the sea. Sideward “long-shore” currents chisel away the beach sand and transport sand offshore and downstream. Waves are bigger and stronger at Bass Head.

Bass Head beach is currently flat and fairly wide — thanks to the Town of Hilton Head Island beach nourishment program. This recurring program rebuilds the tidal shore and the dunes with sand dredged offshore and pumped onshore. Naturally, this entices swimmers and body surfers. A word of caution here: at Bass Head, as on any beach, always enter the sea with a buddy. 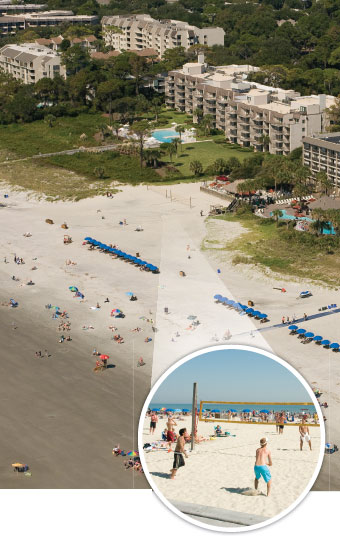 Coligny Beach Park is the gateway to South Forest Beachand the Sea Pines beach — five miles of the widest, most stable shore on Hilton Head Island. This is the beach where locals held “Marsh Tacky” horse races in the 1950s, where millions in real estate deals have been closed, and where it is so inviting to picnic and play and watch ubiquitous gulls and fish crows beg picnic morsels, “peeps” (shorebirds) skitter up and down the shore, and skeins of brown pelicans “air-surf,” gliding inches above the waves.

If you walk barefoot for any distance on this beach, your feet will soon complain. The intertidal zone (between high and low tides) is very hard on the arches. Here, the slow tidal motion deposits the fine grains of sand like micro-shingles on top of one another. As the seawater drains away, the sand dries and compacts — the way corn flakes do if you leave them in the cereal bowl too long. Take time to play in the long tidal pools, called “runnels.” These temporary aquaria are rife with crabs, snails, starfishes, and perhaps a fish or two. 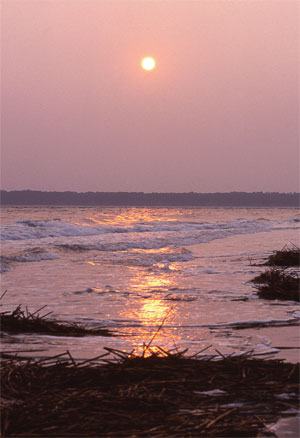 South Beach is the end of the line of Hilton Head Island’s run of beaches. This is the toe of this foot island. Geologists give South Beach the unflattering name, “spit.” It describes the formation of this beach. The long-shore current, mentioned above, transports sand as far south as possible before it collides with the even stronger tidal flow in Calibogue Sound. At this junction, the current spits out its cargo of sand. The sand accumulates, but the sideward flow in the Sound chisels the shore into a steep drop off.

The trek to South Beach is long, but well worth the effort. Here you can see pods of bottlenose dolphins trolling back and forth, plentiful sea and shore birds, horseshoe crabs nesting in spring, and a plethora of other sea creatures locked in temporary tidal pools. Let the kids play in these warm pools, but avoid swimming in the Sound, with its steep drop-off and strong current. Bring along a pair of field glasses and survey the nearby geography: Tybee Beach, Ga., Daufuskie Island across the Sound, the surf from Barrett Shoals — the popular sport fishing ground, less than two miles offshore. To locate the spot, key into the ragged flocks of seabirds circling above charter boats.

At the day’s end, on any of Hilton Head Island’s magnificent seven beaches, one comes away with happy fatigue and the lifelong realization: Nature Is Grand.