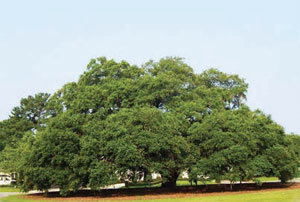 Tailbird was captured – twice – by the British during the Revolutionary War and wasn’t released the second time until after the war was over.

The lore about the Tailbird Oak goes back to October 1781 when a Royal Militia on Daufuskie Island was instructed to burn the homes of known Patriots between Beaufort and Savannah. When they arrived at Tailbird Plantation, Tailbird’s nine-month pregnant wife faced the officer in charge who was her brother-in-law. He allowed her to move all the household goods out of the plantation house and place them under the spreading braches of a giant live oak about 100 yards from the main house before burning the house down.

Mary Ann Tailbird gave birth to a son the next day.

That oak stands to this day and has garnered many “oldest” plaudits. Krebs helped save the tree in modern times.

“It was on a site that was going to be a single family lot” and built on in the Bay Club section of The Cypress retirement community, Krebs reported. “We worked with the developer and he finally agreed to move that lot to another lot that had been designated as open space, and use that lot as open space instead.”

Asked if the Tailbird Oak truly was the oldest one on the island, she responded: “I don’t think we can answer that question.”

“Trees are very difficult to age,” she went on. “They put down growth rings, as you know. People say count the rings. Well, you have to cut down the tree to count the rings. You have to invade the tree’s trunk to do that, so that’s not a good idea.”

But, she cautioned, trees don’t always put down one ring a year.

“It varies depending on climatic conditions,” she explained. “If it’s a really bad year, a dry year, it may not put any rings down. If it’s a really good year – wet, lots of nutrients in the soil – it may put down numerous rings in one year.

“So it’s not a really accurate way to age trees.”

“Having said that,” she continued, “we can guess by looking at the diameter of a tree how old a tree is. But we’re just guessing, just like everybody else.”

And the Tailbird Oak? “It’s not the biggest one on the island,” she said. “So I would say it’s probably not the oldest one, judged by its size.”