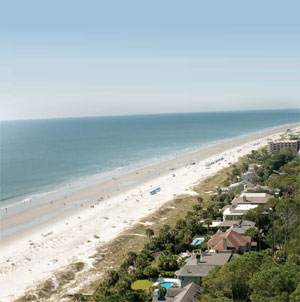 The $260,000 study funded by the U.S. Bureau of Ocean Energy Management has three components.

One, what effect does renourishment have on property values next to the beaches? Two, do beach improvements create benefits for visitors, and if so, how do these benefits translate into increased use value and changes in economic expenditures? Three, do renourishment projects result in higher tax revenues and employment further inland?

A preliminary look at prenourishment Dare County, N.C., of 1997 and 1998 shows there is a positive effect on Outer Banks properties within 2,270 feet of the beach, but variables come into play: Do people believe the beach will encroach or recede in the future? What are the perceived recreational values and economic costs of related environmental impacts?

Previous studies showed that added value estimates range from $200 to $1,000 per household for an additional foot of beach width, depending on proximity.

Landry is also surveying households in states that provide the lion’s share of visitors to Carolina beaches to learn about visitation patterns and how visitation and expenditures could change with beach conditions. His survey will establish a baseline of tourist activity and examine how visitation levels might change if beaches become heavily eroded or are widened through beach renourishment.

George Ebai, an economist with the U.S. Army Corps of Engineers, is looking at the broader economic impacts of beach renourishment projects. For example, do they attract more visitors and if so, how does that translate into dollar amounts for the tourism industry?

The study also will look at how people view the positive and negative environmental effects and the costs of beach replenishment.

“My role is to show the impacts of government expenditures and the distributional impacts of beach renourishment,” Ebai said. “The primary beneficiaries of beach nourishment are residential and other property owners and beach visitors. But we like to show that beach nourishment can engender other external benefits and costs, including those that extend beyond the immediate beach area.”

“Many property market studies attempt to identify cause-and-effect using good experimental design. But in the case of beach replenishment by government agencies, it’s not so clear, as the value of property protected plays a role in benefit-cost analysis,” Landry said. “Ultimately, we‘re trying to find out if the Carolinas did a better job of beach protection, what would be the implied value to property owners and would there be more visitors?”

The results, expected in a year, might be in time for Hilton Head’s next beach renourishment project planned for mid island in 2015. It will be smaller than the $8 million project two years ago that dumped 1 million cubic feet of sand near Port Royal, said Scott Liggett, chief engineer and director of public projects and facilities for the Town of Hilton Head Island. The 2012 project was funded by the town’s 2 percent tax on accommodations and a $700,000 state grant.

The proposed project won’t use sand from the ocean, but truck it in from inland, a plan that has raised traffic and noise concerns among residents.