It was barely 8 a.m. when we hit the beach near Fish Haul Creek on a cold January morning. The wind was howling out of the north at 25 mph, making our eyes tear and faces sting.

The dry surface sand of the beach was moving swiftly past our feet like a white river that we were wading through; if you watched the ground as you walked, you were overtaken by a feeling of vertigo.

Better to look ahead, to peer through the fog of blowing sand and try to locate the reason we were subjecting ourselves to these very un-tropical conditions.

And then we see them.

Ghostly shapes gathered around small clumps of plants or hills of sand or discarded plastic bottles - any shelter to cut the force of the wind - shorebirds! Shorebirds by the hundreds, where just a few minutes ago we would  have sworn there was nothing but blowing sand!

During low tide, when invertebrate-rich areas of sand and mud are exposed, many of these species can be seen actively feeding (foraging) in these areas. During high tide when these feeding areas are covered by water, these same birds rest (roost) on the beach in groups numbering from a few individuals to many hundreds. They may rest below the high tide line or above it; in strong winds, many can be seen hunkered down on the leeward side of emerging dunes, beach plants or piles of marsh grasses. 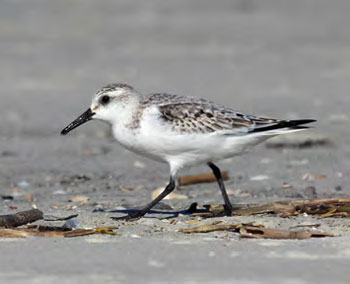 Although they may not look like they are doing anything when they rest, they are actually doing something critical to their survival: conserving energy. In general, the smaller an animal is, the faster it burns energy and the more it needs to eat.

Just like humans, birds are warm-blooded, which means that they maintain a constant internal body temperature regardless of the temperature of the environment. Although this allows birds to live in areas of the world that have extreme temperatures, it also requires lots of energy.

The bottom line for shorebirds is that unless they take in more energy than they use for temperature regulation and other activities, and use that energy to build fat stores, they may not survive the rigors of migration or breeding.

One of our many interesting winter shorebirds is the sparrow-sized piping plover. Our beach is host to 15 to 22 pipers, most of which are here on the island from November to April.

You can be a positive influence on the survival of shorebirds by sharing the beach with them. Here are some ways to help: 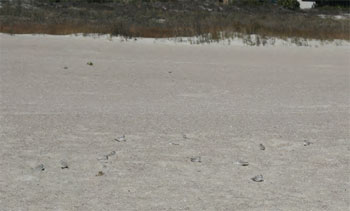 Some of these birds have been banded with leg bands so that individuals can be recognized. The shape, color, material and combination of the leg bands gives scientists information on such things as what population the bird belongs to, age and where each banded bird spends the winter.

The winter feather colors of the piping plover blend in with beach sand very well, making it hard to see the birds from a distance. They tend to rely on this coloration and lack of movement to avoid attracting predators. This behavior can also work against them on beaches heavily used by humans, however, as it increases their chances of being stepped on or taken by a domestic animal. Piping plover numbers are already very low, and all three populations are considered threatened or endangered.

So, the next time you are on the beach, please remember our shorebirds and the amazing lives they live.

Here are some facts about shorebirds:

To learn more, visit the Cornell Lab of Ornithology at allaboutbirds.org, or pick up one of the many great field guides available on the Eastern birds of North America.