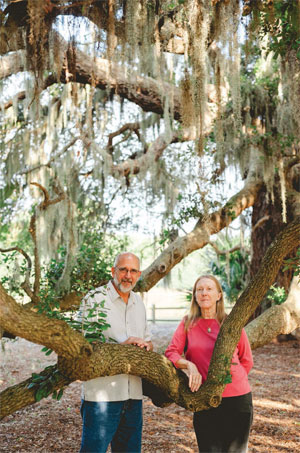 Those trees jutting skyward in shopping center parking lots around Hilton Head Island and the tree shaded neighborhoods which, together, make the town so appealing are a result of a determined effort by the island’s official family since soon after its incorporation 30 years ago to keep it a place of beauty.

The intervening years saw immense development, but it wasn’t unbridled and, through it all, Hilton Head Island zealously protected its trees.

The first guardian and tree guru was Sally Krebs, a biologist by training and self-professed nature lover, who oversaw the writing of the tree ordinance in 1986 as her first job as the new natural resources administrator for the town, a post she held for 25 years.

Rocky Browder, who has the title of environmental planner for the town, succeeded Krebs as the keeper of the tree regulations two years ago and credits her with breaking in all elements of the community to the ordinance rules.

“I believe through her efforts over the years most of the resorts and the management regimes and the tree companies and the landscaping companies are all aware that the town has regulations with regard to trees and tree removal,” he said.

“I find that coming in after Sally that people do realize the importance of having trees on your property and the benefits of having a treed lot rather than a totally cleared lot,” Browder added. “I find that a lot of people on the island are happy that we have taken this course.” Krebs acknowledged it wasn’t easy at first, but had no complaint.

“I think that any time you put a new ordinance into effect it raises some opposition because it’s not the way things were done in the past,” she said.

Krebs headed the committee that drafted the ordinance which she said had a good representation of the town on it. It became incorporated in the town’s land management ordinance adopted in 1987 and rewritten and updated in 1998.

Krebs, recalled that there were some arrests when the ordinance was first in place as people adjusted to it. She declined to say what were the most egregious violations during her tenure, but that there were a lot of violations.

To her, no violation was worse than another. But, she allowed, “For us to arrest somebody it would take something pretty bad.”

Browder said that today “most folks know” what trees are protected and the process they must follow to remove one. He said violations are mostly dealt with by fines — which can be costly as they go up to $1,000. That also can be coupled with a requirement for mitigation – replacing a removed tree or trees.

“That’s not to say we don’t get some folks who knowingly cut down trees they aren’t supposed to,” he went on. “We’ve got a good force of local residents on the island who are our eyes. We get phone calls all the time about someone checking on what their neighbor across the golf course might be doing – ‘I see trucks on site. Have you authorized these removals they are doing?’

“ Krebs said it was hard in the early days of the tree ordinance to keep up with all the burgeoning development going on on Hilton Head Island.

But, she continued, “It was just something we did. Everybody was busy during the ‘90s and early 2000s. It kept the department very busy with all the development coming in.”

As the town’s sustainable practices coordinator now, Krebs’ job today is education – teaching adults and children in the schools about the value of trees. “My job is educating people on what are called natural services provided by trees,” she explained. “Natural services are things like erosion control, flood control, production of oxygen, production of food. All those things are provided by trees.

“I’ve run into a lot of tourists in the public speaking that I do that don’t understand why their community can’t be more like Hilton Head,” she continued. “And believe it or not, one of the places they most ask me about is the Walmart on the island. They think it’s incredibly beautiful. They wonder why the Walmart in their community wasn’t built in the same manner.” With her present job, Krebs doesn’t do permitting any more. That falls to Browder.

Browder said his job is to oversee implementation of the land management ordinance and that the majority of what he does on a daily basis is deal with individual tree requests that come in and natural resources requests. On tree requests, he said he goes out for on-site visits on each one to determine if the tree can be removed for the reasons given in the request.

“Then I made a determination as to whether mitigation for that tree is necessary or not,” he explained.

He said there are four different categories of trees and shrubs that are protected. The applicant will be required to replace one tree for every 10 inches of diameter at breast height of the tree or trees to be removed, he said.

“With the majority of the trees that we allow to come out, there’s something physically wrong with them,” Browder said. “There’s decay. They are a hazardous tree of some sort, they have weak points and could snap off in high winds. Others I look at are just the older more mature trees. They’re just reaching the end of their life span. The water oaks especially. They decay at a high rate.”

“There are allowances for tree removals in new developments,” he continued, “but we do have a system built into the land management ordinance that if the development impacts trees throughout that development while they are developing that property, they are required to put a certain amount of inches back into areas where they are not building on to.”

Krebs noted that the Hilton Head Island ordinance was a cutting edge ordinance when enacted because it also protected the species mix of trees.

“You’re not only concerned about replacing trees with anything else, but with replacing them specifi cally with species already found here and the same type of species that were removed,” she pointed out. “So our ordinance was really a biodiversity protection ordinance, not just a tree ordinance, because it protects all the different species on the island. And that was pretty progressive at the time.”

Over the years, Krebs said, she has fielded “hundreds” of queries from other towns about the Hilton Head Island ordinance — from Oregon to Maine and from California to the Carolinas. Browder, who marked his second anniversary on the environmental planner job Oct. 1, got one such call just a couple of weeks ago.

It came from North Myrtle Beach, which is doing a review of its tree ordinance, which it undertakes every two years, according to Sean Hoelscher, senior planner for that city. He said they looked to Hilton Head Island in search for what’s done in towns comparable in size and population with a tourist trade.

Hilton Head Island is now in its third year of reviewing the land management ordinance, including the trees portion, with the help of a committee appointed by the town council and a consulting firm from Chapel Hill, N.C., Clarion Associates, a planning, land use regulation and real estate company. The goal is to make the ordinance more user friendly and easier to read, according to Terry Lewis, the town ordinance official who is overseeing the review.

Browder said the discussions include the possibility of taking a new “canopy” approach rather than the present individual tree approach.

A very big and quite controversial tree removal and mitigation project under the present ordinance is the clear cutting and topping of trees at the Hilton Head Island Airport, a Beaufort County facility which first had to get town approval.

The trees were cut down and topped in a long swath at the north end of the existing 4,300-foot runway in 2012, and now the county is advertising for bids on the mitigation that’s required, according to Rob McFee, interim manager of the county’s two airports. He said while the county plans to add another 700 feet of runway in Phase One of an extension plan for the Hilton Head Island facility, the felling of the trees had nothing to do with that. He said it was done at the behest of the FAA which directed the county to do it as a safety measure.

“The trees were in violation of the FAA’s slope penetration requirement,” he explained. “They stuck up too high” – posing a danger for incoming aircraft.

McFee said 1,165 trees were cut down, but 1,347 new ones must be planted for mitigation. He said they will be low-lying varieties and will be planted in buffer areas where they won’t interfere with air traffic.

The engineer’s cost for the mitigation, he added, is $525,000. McFee said no starting date has been set for building the runway extension.

The congregation of St. James Baptist Church, on Beach City Road just beyond the airport runway, has looked warily at their neighbor’s tree cutting and topping. It has lived uneasily next to the airport since the airport was built in 1967-68.

Perry White, a deacon of the church and an African-American whose family has lived in the area since slavery, said, however, the church, founded at its present site in 1886, has been “holding its own” when asked about the prospect for its future.

All the proposed plans for extending the airport’s runway, including the recommended one, exclude the church’s property from the land to be taken for the expansion.

Some residents of the Mitchelville neighborhood around the church openly objected to the tree cutting at the airport, but to no avail.

Another big tree planting is planned for the Shelter Cove Towne Center, now under development, where Lee Edwards, president of The Greenery, a retail garden center and landscape business on Hilton Head Island, will be installing several hundred new trees before all is done.

Edwards, who also serves on the town council, said the plantings would include all sorts of trees, including pine trees, wax myrtles, crape myrtles, live oaks, pin oaks and palm trees.

Asked what kind of trees his residential customers are buying, he said all of the above mentioned trees as well as decorative trees and canopy trees.

“A lot of people want dogwoods,” he added, “but they don’t do well here. It’s too humid and they are prone to disease.”

Asked what her favorite tree was, Krebs, the town’s sustainable practices coordinator, said it was the lob lolly bay.

“I love all of them,” she said. “But that one blooms during the summer months. It’s not a pine at all,’’ she added, to distinguish it from those tall lob lollies .”It’s part of the Tea family. It looks like a small magnolia, but it’s not a magnolia.”

Browder, the town’s environmental planner, said his favorites are the big oaks like one found at Harbour Town in Sea Pines and those at the back gate of the Hilton Head Plantation. “They are very pretty. I find them very attractive.”

For its efforts to protect the town’s trees, Hilton Head Island has been recognized by the Arbor Day Foundation as a Tree City USA for 12 years.

Looking back over her years working with trees, Krebs said she’s pleased with the results of the town’s efforts.

“I think that when you look at Hilton Head as a community, and compared to other communities in the Southeast, we’ve done a pretty good job of protecting out urban forest,” she asserted. “We certainly learn.