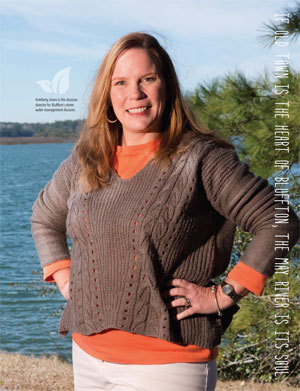 If Old Town is the heart of Bluffton, the May River is its soul.

The meandering 15-mile long river, just south of Old Town Bluffs, has been an integral part of Bluffton since it was established as a formal town in 1825.

The river, which unlike most rivers, has no high ground headwaters that feed fresh water from upper streams and creeks.

Instead it depends on tidal shifts that flush it out with saltwater from its down river mouth at the Calibogue Sound and the Atlantic Ocean.

This flow has helped make the May River an oasis for oysters, shrimp, crabs and saltwater fin fish.

Oyster harvesting, in particular, is one way that many people here make their living. At the Bluffton Oyster Company, for example, they still fish the river waters and shuck the oysters by hand as they have done for several generations.

Kimberly Jones, the division director for Bluffton’s stormwater management division, said preserving the health and vitality of the May River is a priority of local, state and federal agencies as well as rank and file community members.

In addition to its shellfi shing industry, the river also serves as a recreational hub for the surrounding area.

Depending on the season, the river is typically filled with boaters on small Carolina skiffs, kayakers and those just sunning themselves on several sandbars during low tide.

Jones said because of the environmentally sensitive nature of the May River, with its shoals and 8-foot shifting tides, there are no large boats and marinas on the waterway.

For more than a century and a half, Bluffton was a sleepy stable community, long known as a respite for wealthy rice planters prior to the civil war.

As Hilton Head Island developed into a major vacation destination point and retirement haven in the 1980s, development pressure has increased on the mainland and Bluffton during the past 15 years.

The town made a big change to save the May River from the polluting effects of burgeoning development around U.S. 278, which quickly developed as the main highway to Hilton Head.

The people of Bluffton knew that the key to maintaining their town’s identity was to protect water quality in the May River. So in 2000, the town council asked experts from across the state to help it undertake a baseline study of the river. The National Oceanic and Atmospheric Administration’s Center for Coastal Environmental Health and Bimolecular Research in Charleston, came to chair and helped to form the Bluffton Technical Advisory Committee.

NOAA’s field studies help evaluate and predict the controlling factors of natural and human influences in marine and estuarine habitats, including rivers.

The study helped develop a model stormwater ordinance and storm watermanagement design manual that passed in May 2007. The ordinance and manual include aggressive construction site inspections, require permeable (having pores or openings that permit liquids or gases to pass through) parking spaces in both commercial and multi-family residential developments, and specify that stormwater runoff filter through to the groundwater table.

The ordinance’s most innovative provision requires developers to monitor sediments leaving building sites during construction, to monitor fecal coliform bacteria for three years post-construction. Developers must then report their findings to the town.

In the meantime, the town began to monitor water quality at several locations in the May River. Bluffton conducted a quarterly sampling study in 2005-06, followed by a more comprehensive one in 2007-08.

Preserving and improving water quality on the May River is not a stagnant process. Jones said her department and supporting agencies are constantly coming up with changes and improvements from building more storm runoff lagoons to initiating community grassroots projects such as use of rain barrels and pet waste reduction programs.

“With the town growing so rapidly, we have to continuously work on the restoration of the river and focus on an ongoing pollution prevention plan,” she said.

While much has been done to preserve the health of the river, several new initiatives are being undertaken this year to enhance it and serve the May River recreational community.

The town and Beaufort County want to install a dock, boat launch and observation platform at the Oyster Factory Park on Wharf Street along the May River. They plan to finish the $375,000 project in time for the boating season.