The shotgun blast that marked the start of the inaugural Buffalo Trail Run was still ringing in my ears when I jumped on the back of an ATV driven by Palmetto Bluff Conservancy Director Jay Walea.

As Walea set off to monitor the runners, I held on for an up close and personal tour of the 10-kilometer race course that weaved its way through some of the most isolated stretches of the property.

The idea for the 10k, 30k and 50k Palmetto Bluff Conservancy Buffalo Trail Run was part his idea. Initial plans for the race were hatched after the success of the Palmetto Bluff Half Marathon. But this time, instead of paying a visit to Wilson Village, runners would trek through the most remote heart of the 20,000-acre plantation.

“It’s the part of the plantation that’s farthest from the road and therefore the least travelled,” Walea said. “Some of these places the runners are going are completely closed to the public, so this is really the only chance most people will have to see these areas.”

As if on cue, three white-tailed deer bound across the road in front of us. From my vantage point, it was diffi cult to say whether the wind had masked our scent or if the animals were summoned by Walea. Then, minutes later, my suspicions were heightened when two wild turkeys arrived.

Walea pressed the pedal to the floor and we ripped across a dirt access road adjacent to the course. He knew from his 26 years in these woods that the maneuver would get us out ahead of all but the fastest runners. We arrived at the checkpoint in time for Walea to cheer on some of the Palmetto Bluff staff running in the race.

He pointed out the spot in the woods where the pine uplands gave way to the ancient maritime forest at the edge of New River Marsh. “Other than people who come on my nature tours, these woods haven’t been visited in a long, long time,” he said. “I’m lucky enough to work in what might be the best office in the world,” Walea said. 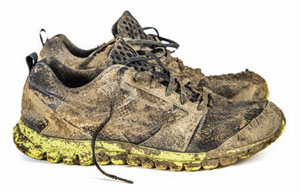 His charge of maintaining the massive swath of conservation space is all encompassing, but he makes it work with a laugh and a smile.

“The Palmetto Bluff Conservancy is all about educating our Palmetto Bluff owners and residents of the Lowcountry about what a special place we live in and what we need to do to protect it,” Walea said. “Our charge is to promote responsibility so that development and nature can coexist in harmony.”

According to the conservancy website, “Palmetto Bluff is one of the largest remaining undeveloped coastal areas in the Southeastern United States. The bluff has been managed for timber, agriculture and wildlife for hundreds of years. Traditional land and wildlife management techniques such as hunting, prescribed burning, wildlife food plots and timber stand improvement have all been employed to maximize the diversity of the landscape.”

“We’re surrounded by 32 miles of riverfront, so obviously water is a huge part of the Palmetto Bluff experience,” she said.

She said guests regularly enjoy the outpost for Outside Palmetto Bluff, located on the May River where owners, visitors and guests can participate in standup paddle boarding, kayak tours and fishing expeditions.

“Palmetto Bluff was founded on the principle that the land would be managed by the Palmetto Bluff Conservancy,” Hampson said. “It’s our goal to provide programs for residents, guests and visitors to experience the property.”

At the finish line of the race, I met up with Palmetto Bluff archaeologist Mary Socci and conservancy board member Patty Kennedy.

“Access to the wilderness at Palmetto Bluff was an early core value,” Kennedy said. “It’s important for us to have an authentic and meaningful preservation strategy.”

She and other land management staff are available as a community resource at the Interactive History Center, where plantation artifacts, tobacco pipes, ceramics and gun flints are on permanent display.