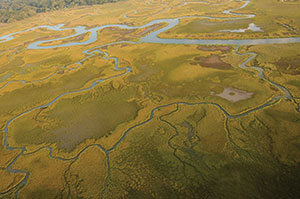 From the headwaters to the deep sea, the saltwater continually changes hues. Next time you’re out on the beach or in a boat, take a look. The small inshore creeks, like the Okatie in Bluffton and Jarvis on Hilton Head Island, are anything but clear. The tea-color comes from the acids in leaves and twigs decomposing on high ground. Runoff carries these acidic tannins into the water. Follow these creeks until they mix with a larger body of churning water, and see how the water turns cloudy-brown, like cocoa.

Port Royal Sound and Calibogue Sound are blue-gray because they are deeper (over 60 feet in some areas) and they flow faster. In these long, narrow bays the heaviest organic particles sink and the broad waters reflect the color of the sky. These two great sounds empty into the Atlantic Ocean, which clearly is not the photoshopped blue seen on postcards. The ocean reflects the sky, but it mixes in a healthy dose of algae, sediment from salt marshes, and minerals from millions of surf-crunched sea shells on the shore. These mix the palette of living colors in the Lowcounty.

Boat or paddle a kayak up, way up, the May River in western Bluffton. Keep to the left and you will see ancient earth history unfold. The lofty marsh cliffs at Palmetto Bluff are chiseled remains of a prehistoric beachhead. Geologists tell that over several different epochs, the sea level was significantly higher than at present. Saltwater would have covered most or all of Hilton Head Island.

The ocean receded 70 miles offshore during an “ice age” 20,000 years ago. Then, as the climate has warmed in the past 10,000 years, the sea level has risen over 400 feet.  Eventually, the May River channeled its way into the ancient beach-luffs, carving sheer, hardened cliffs. But in this erosion there is life. Pock-marked in the walls are the cavities of belted kingfishers, bank swallows, shorebirds, and maybe a bat or two. Hordes of wading birds hunt in the scree of eroded sand at the base of the bluffs. Marsh grass and oysters are colonizing. In the Lowcountry, where there is water, soil, and time, nature will find a way.

BACK FROM THE BRINK

There was a a time, locals and historians say, that whooping cranes migrated through the Lowcountry. Carolina parquets (now extinct) flitted from branch to branch. Then there is the story of escaped Rhesus lab monkeys running amuck in Bluffton. And eastern wood storks flocked to feed in Lowcountry impoundments — former duck hunting ponds, and before that, plantation rice fields. The storks became endangered and nearly died out from the loss of their old-growth swamp forest breeding habitat.

Now, the good news: The U.S. Fish and Wildlife Service will soon “de-list” the wood stork as a threatened species. This wading bird has made a significant comeback as result of environmental protection of bottomland forest breeding habitat and shallow marsh feeding grounds in former rice-lands and other conservation areas. Wood storks are now seen in Boggy Gut (Sea Pines Forest Preserve), Whooping Crane Conservancy (Hilton Head Plantation), and the “Golf Course Wetland” in Palmetto Hall. These three island sites are restored with reclaimed water from the local Public Service Districts. Thanks to conservation efforts like this, a remarkable species facing extinction now has a new lease on life.

THE ONE THING THAT MATTERS

From the lofty pines that whisper in wind to prairies of untamed grassy salt marshes, and from  Bluffton’s sheer bluffs to the cavernous channel in Calibogue Sound, nature is still encompassing and untamed. Can she remain so? This is our legacy. This is our Lowcountry.

Todd Ballantine is an award-winning writer who has written and illustrated three books in addition to the best-selling Tideland Treasure, newspaper columns, and dozens of nature and history publications. He lived on Hilton Head Island for more than 30 years and frequently visits the Lowcountry for environmental consulting.