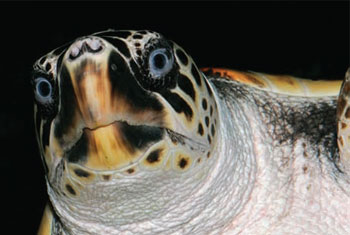 Loggerhead sea turtles emerge from the ocean onto Hilton Head beaches every year in May to lay their eggs. Last year, 339 sea turtle nests broke the previous record for Hilton Head Island set in 2011 (324 nests).

It is a rare sight to see a 400-pound sea turtle lumber up the beach on fins designed to push her gracefully through the water.

It happens at dusk and into the night. Under the cover of darkness, the female loggerhead avoids predators and baking in the summer sun; her cold-blooded, reptilian nature does not allow her to regulate her own body temperature. Her approach, the dig, the egg laying, the disguise, and the return can take anywhere between 2 to 4 hours depending on the tide and obstacles on the beach.

An average of 120 ping pong ball shaped eggs are dropped into a cylindrical hole in the sand formed by her hind flippers. 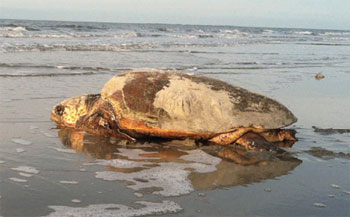 The egg chamber is carefully covered, compacted, and disguised; she will not return to the nest. On their own, the hatchlings incubate with the heat of the summer sun, hatch underground, and emerge about 60 days later. To make the “break out” easier, they all pitch in.

Similar to the advances of the adult female sea turtle, the hatchlings usually emerge at night to avoid predators and heat exhaustion. They detect darkness by sensing a drop in temperature near the surface of the 2 to 3 foot deep egg chamber. Their sense of direction is visual on the beach and then magnetic in the water. They literally sense the magnetic fields of the earth to navigate in the ocean.

Hatchlings leaving our beach will be headed directly to the Gulf Stream, a warm water current that runs north up the eastern seaboard. They will fi nd food and safe haven in the sargassum weed mat that floats in the current. Becoming the North Atlantic Gyre, this current will carry them to the Azores, an isolated island chain off of the coast of Portugal. Approximately 1 in 100 make it 70 miles off shore to reach the Gulf Stream from HHI. There are many birds and fish that prey upon small sea turtle hatchlings. It is estimated that 1 in 10,000 hatchlings will live to reproductive age, 20 to 25 years old. A nesting sea turtle is truly the ultimate survivor. 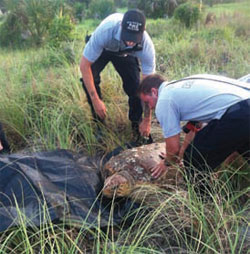 The Coastal Discovery Museum manages the Hilton Head Island Sea Turtle Protection Project for the Town of Hilton Head. Every morning at 5 a.m., May through October, two patrol staff members meet to begin a 28-mile ride to scour 14 miles of ocean facing beach. The staff are trained to look for the tracks of the loggerhead sea turtle. It looks like a tractor tire rolled out of the ocean, fell down near the dune, and rolled out again.

Most people will overlook this very obvious clue unless it is pointed out. After the staff locate the egg chamber, white PVC poles are placed around the nest. Orange tape is added to avoid traffic, sand castle construction or beach chair set up on the nest site. It is a federal offense to disturb the nest as all species of sea turtles in United States waters are protected by the Endangered Species Act. Tampering with the eggs can halt the development of the sea turtle embryo. 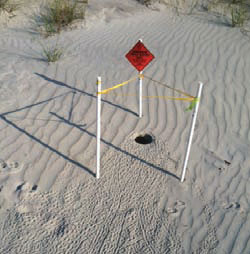 In the event that the sea turtle lays its eggs below the spring high tide water mark, usually indicated by a line of decaying marsh wrack up and down the beach, the sea turtle patrol staff will relocate the nest: Beginning May 1, a daily patrol is conducted, rain or shine, in the event that a nest is laid in the zone that could result in a tidal wash of sea water over the egg chamber.

A nest must be relocated on the same day it was laid in order to prevent development issues inside the egg. The staff will dig a new egg chamber closer to the dune and carefully fill it with the eggs removed from the original location. Last year, 60 percent of the nests laid on HHI were relocated. For more statistics, visit seaturtle.org.

In June, July, and August, the Coastal Discovery Museum’s Sea Turtle Protection Project Patrol staff and the Sonesta Resort in Shipyard Plantation host a Sea Turtle Presentation at 7:30 p.m. Monday through Thursday. This presentation is educational for all ages; residents and visitors may register through the front desk at the Coastal Discovery Museum. The discussion includes sea turtle biology, an explanation of Sea Turtle Protection Project staff activity, and what you can do to help the loggerhead sea turtles. 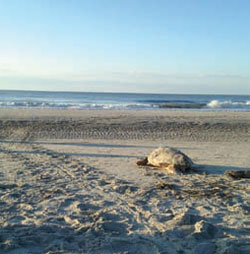 Sea turtle nesting density has increased in recent years and we look forward to the possibility of breaking another record in the 2014 sea turtle nesting season. Sea turtle projects up and down the coast permitted by the South Carolina Department of Natural Resources, the commercial fishing industry utilizing Turtle Excluder Devices (TEDs), Town lighting ordinance enforcement and public awareness are making a difference. Please support this endangered species by becoming informed and helping to educate the next generation.

NOT HERE IN THE SUMMER?

The Adopt-a-Nest program allows participants to keep tabs on the nesting season with periodic email updates on patrol activity and specifics on nests chosen for adoption. You never know what interesting saga will occur on the beach. Last year, the HHI firemen carried an enormous sea turtle to the surf after it got stuck in the dune!