For six years, the Daufuskie Island Conservancy has been standing guard over the quiet, fragile paradise

It’s like taking a step back in time when you step off the ferry onto Daufuskie Island. There are no cars, no skyscrapers, no mad rushes to get to the next appointment. Most of the island’s roads are unpaved. There are only white beaches, a rich abundance of flora and fauna and a variety of animal species, including graceful snowy white egrets and soaring bald eagles. “The natural beauty here inspires the solitary artist, photographer or bird watcher. It can even inspire a gathering of friends just to watch the sunset,” says resident Karen Opderbeck.

But the environment, of course, can be easily disturbed. And for Daufuskie’s 400-plus full-time residents, the 8-milesquare island is a fragile treasure that needs to be protected. 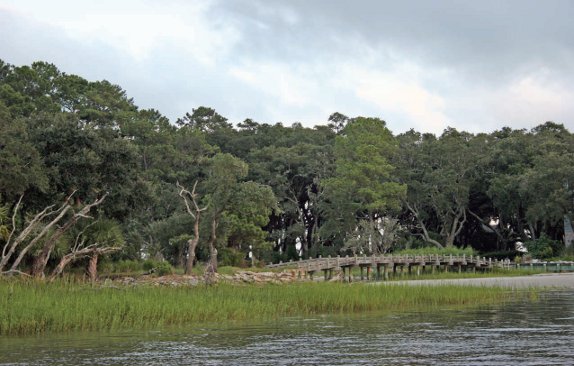 To that end, the Daufuskie Island Conservancy was created in July 2005 to educate islanders about the natural environment. The group still oversees many educational programs, but it’s also developed into an organization that promotes and advocates the protection of the island.

In 2009, the conservancy hired a strategic planner and surveyed residents to learn on what they felt were the most important environmental issues facing the island. Their responses: recycling and waste, water conservation and education.

In 2007, the conservancy initiated recycling in Haig Point, one of its residential communities, said Opderbeck, who is the conservancy’s director of waste and recycling. “We started out with basics such as clear glass, aluminum and plastic. Haig Point is now recycling aluminum and tin, cardboard, paper, magazines, plastic, shopping bags, foam food and egg trays, household batteries, cooking oil, and clear, brown and green glass.”

Waste disposal is another issue facing the island. “Our dream is an islandwide solution,” she said. “Our target is to have one waste facility instead of the current three.”

The Daufuskie Island Conservancy has several water initiatives in the works. First, the conservancy is working with the island’s communities to encourage landscaping using native plants to minimize the need for irrigation.

The conservancy also encourages homeowners to use watersaving devices, such as dual flush toilets and aerators on shower heads and faucets. Water conservation is imperative because of the possibility of saltwater intrusion into the Floridan aquifer, which is the island’s source of water. The aquifer sits underneath Florida, south Georgia and parts of Alabama and South Carolina and provides drinking water to millions of people in the Southeast. As aquifer water levels decrease, there is the possibility that saltwater could intrude into it, making the water undrinkable.

“Basically, we want to raise awareness about Daufuskie,” said Opderbeck. The conservancy has programs at least monthly with various speakers and activities. For instance, in January the conservancy held “Water Week” and hosted speakers who addressed issues such as saltwater intrusion, cisterns and rain barrels and water and energy-saving devices.

“Daufuskie is a true gem,” said Opderbeck. “The conservancy’s efforts are the way to preserve Daufuskie for the future.”