BEAUTIFUL TREES AND PLANTS, FLOWERS IN A RIOT OF COLORS, STONE WALKWAYS AND PERGOLAS AWAIT THE VISITORS WHO TAKE PART IN GARDEN TOURS THIS MONTH IN HILTON HEAD ISLAND AND SUN CITY IN BLUFFTON. 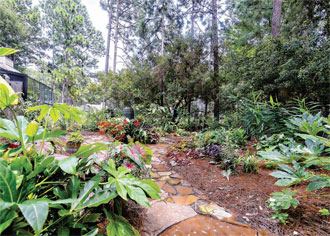 For those of an historic persuasion, there will be a tea in Old Town Bluffton with scones and desserts and a fashion show of vintage dresses dating back to the 1800s.

The Bluffton Historical Preservation Society, which is putting on the tea, is considering adding a garden tour next year to its repertoire of walking historic tours.

The 27th annual All Saints Garden Tour, the granddaddy of the garden tours sponsored by All Saints Episcopal Church, will be from 10 a.m. to 4 p.m. Saturday, May 17, and has the theme of “A Potpourri of Gardens.” It will feature seven home gardens and the gardens of Hilton Head Island High School.

Three of the home gardens are in Hilton Head Plantation – “Southern Solace on the Intracoastal”, “Possibilities Aplenty” and “A Colorful Refl ection.” Two are in Port Royal Plantation – “Royal Sound Garden” and “A Passion for Vegetables.”

One is in Moss Creek Plantation – “House of Palms: An Emergent Garden,” and one is in Windmill Harbour – “Renee’s Wish.”

Tickets to the All Saints garden tour cost $35 and include a seated luncheon from 11 a.m. until 2 p.m. that will be served in the church’s parish hall on Meeting Street, off Main Street, on Hilton Head Island. Tickets may be purchased at the church on the day of the event or at numerous retail outlets on the island and in Bluffton.

In addition, a “Flower Bower” boutique, a “Heavenly Confections” bake sale and Pino Gelato will be located in the parish hall. A variety of original works of art will be on sale. 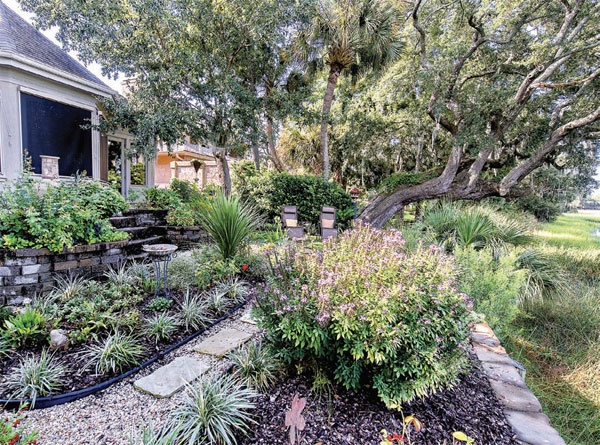 The 27th annual All Saints Garden Tour, the granddaddy of the garden tours which is sponsored by the All Saints Episcopal Church, will be held from 10 a.m. to 4 p.m. on Saturday, May 17.

Vendors located on the church grounds will include The Greenery, Jewelry by Lilllith and Jewelry by Caroline Alderman. F. Steven Branyon, All Saints’ Organist/ Choirmaster, will play organ music from 11:30 a.m. until noon.

Karen Reuter, chairwoman of the 2014 All Saints Garden Tour Board, said all proceeds from the garden tour will be donated to six local nonprofits. They are Hilton Head Island and Bluffton Backpack Buddies, which send nutritious food home with youngsters for the weekends; Family Promise of Beaufort County, which helps homeless families; St. Stephen’s United Methodist Church Outreach Food Bank in Jasper County; Hilton Head Island Safe Harbour, which helps the elderly stay in their homes; and Thumbs Up, Inc., a literacy program in Beaufort and Jasper counties.

Reuter said that last year the tour raised approximately $25,000 for charities and that each charity received $4,300. Over the past 26 years of the garden tour, almost $500,000 has been raised for local charities.

The hard part, Reuter said, was deciding which charities to support. She said this year 15 charities appealed to the church for help.

“It’s really difficult because they are all so deserving,” she explained. ”This event provides the rare opportunity for everyone to see some of the premier gardens in our area while at the same time helping our community respond to the challenges of hunger, homelessness, literacy and aging.” 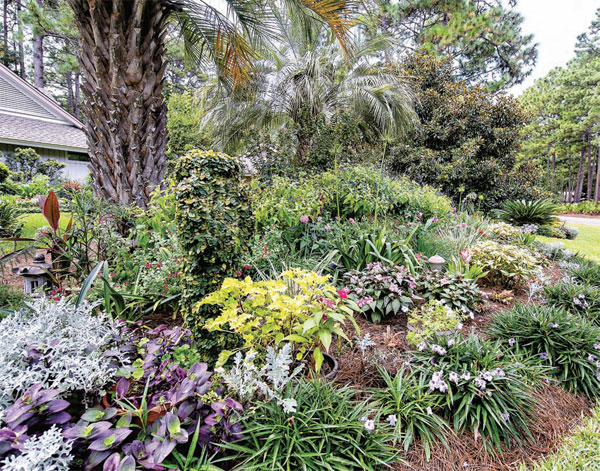 The All Saints Garden Tour has the theme of “A Potpourri of Gardens.” It will feature seven home gardens and the gardens of Hilton Head Island High School.

Reuter said most people have been very generous in letting the church show their gardens on the annual tours. “This is particularly true,” she noted, “when you have 500 to 700 people traipsing through them.”

The winning poster chosen by the jurors for this year’s All Saints garden tour was local photographer Don Nelson’s photograph ”Sunflower.” It is only the second time in the tour’s history that a photograph won the poster contest. The winner of the “People’s Choice Award” among the contest entries was local artist Don Nagel’s painting, “Monet’s Garden,” which drew the most votes from visitors to the art exhibit.

The garden tour in Sun City will take place from 9 a.m. until 1 p.m. Monday, May 19. It is presented by the community’s Avant Gardeners Group, which does only flowers and such, not vegetables, and will feature six home gardens.

But there is a catch. You must know someone who lives in Sun City and is willing to call in a pass for you to get through the gate.

Phyllis Hannan, chairwoman of the event, said that shouldn’t be too much of a problem because everyone seems to know someone in Sun City.

Tickets to the 14th annual garden tour of the Avant Gardeners are $5 for members and $8 for non-members, Proceeds will support the group’s hummingbird and butterfly garden.

The gardens on the tour include:

Hannan said the gardens survived the harsh winter pretty well. She personally lost a lime tree and others also had lost citrus trees and some sensitive palms.

“But everything is coming back,” she said. “The homeowners are working so hard. It should be a beautiful show.”

The tea and vintage fashion show in Bluffton will be from 2 p.m. to 4 p.m. on Thursday, May 15, at the historic Colcock- Teel House, 46 Colcock St. Tickets may be purchased at the Heyward House, 70 Boundary St., but don’t tarry if you want to go. There’s a limit of 40 persons that can be accommodated for the tea.

The event is a fundraiser for the Bluffton Historical Preservation Society.

Maureen Richards, executive director of the society, said the organization is thinking about adding a garden tour next year.

“We have regular walking historic tours,” she pointed out. “We thought it would be a nice complement to add a garden tour next year.”

But beautiful flowers in the month of May aren’t limited to garden tours. May also has a big floral holiday that’s celebrated – Mother’s Day.

“We have a lot of mothers here,” she explained, noting that many of them prefer the warmer sunnier South to northern climes.

Kiritsy said she gets most of her flowers from the West Coast at this time of year, along with some from Europe, and a few regionally such as snapdragons from North Carolina.

“I think people call us because we have unusual stuff,” she said. “If they want to be creative, we will be creative.”

If the garden tours and all the beautiful flowers from Mother’s Day have inspired you to add a little zip to your garden, consider these suggestions from Carol Guedalia, horticulturist at The Greenery garden center.

The number one flower Guedalia recommends for gardens with full sun and a deer problem is angelonia, which she said comes in white, lavender, blue pink and raspberry.

She also said deer don’t eat zinnias, lantana and salvia. Another way to avoid the deer problem is to use hanging baskets.

She said The Greenery has lots of hanging baskets with a wide variety of flowers. An excellent flower for butterfly gardens, Guedalia said, is the penta.

And for planting in the shade she recommended ferns and caladiums, which deer usually don’t eat. But, she warned, deer do like begonias.

Guedalia urged those with a deer problem who are going on the All Saints garden tour to attend a lecture on “Deer Resistant Plants” being given by Sue Roderus, master gardener and master naturalist at The Greenery, from 12 noon to 1 p.m. at the church.