If you have ever seen Disney’s film “Finding Nemo,” you know that jellyfish are no laughing matter. Upon finding a baby jellyfish, “Finding Nemo’s” Dory decides to name it “Squishy” and keep it as a pet. This lands her in a field of jellyfish, where she gets tangled in their tentacles and is stung multiple times. Here on Hilton Head, jellyfish come through the waters each year, especially after big storms. With a variety of different kinds of jellyfish, it is best to be knowledgeable and safe when spending time on the beach or in the water. 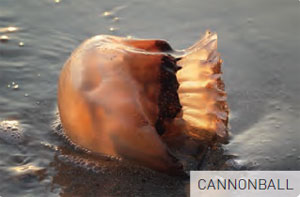 Cannonball jellyfish are one of the most common types of jellyfish in the Lowcountry and tend to wash up on the beach during low tide. Their somewhat clear balloon-shaped head, with a dark brown line and short tentacles, are easily distinguishable from other types. They are more frequently seen around the island and have not been known to sting. To stay safe, avoid poking any that have washed up on shore. 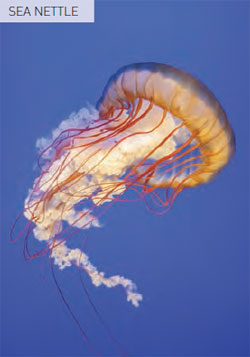 The sea nettle jellyfish is more common in the summer and tends to be responsible for most stings that occur each year. With tentacles that can be several feet long, their sting looks more like whip marks, caused when the tentacles get wrapped around victims legs or arms. Sea nettle jellyfish have an orange appearance extending down into their inner tentacles, complete with thin black outer “whips.”

Extremely rare around Hilton Head but incredibly venomous, the Portuguese man o’ war tend to arrive in area waters after a storm from the Gulf. With tentacles reaching lengths of 30 to 40 feet, stings from these jellyfish can cause severe pain. The man o’ war tends to float with its head at the surface of the water and its tentacles dangling under water, making it one of a kind in comparison to other jellyfish. 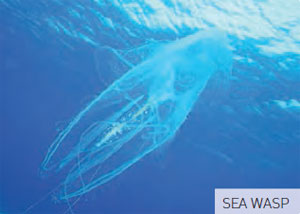 The sea wasp jellyfish is pretty rare in these waters; however, when big storms come through, a few of these jellyfish can be sighted. These are the most venomous jellyfish that can be found in local waters, and their sting can cause severe pain and dermatitis, causing the most threat toward their victims.

Jellyfish tend to be weak swimmers, and most are brought to the waters around Hilton Head by currents created after storms. When hitting the beach, remember to look at the lifeguard stand to see if the yellow caution flag is up. This can mean strong rip tides, stingrays or jellyfish are in the area. Check with the lifeguard about the risks before heading into the water..

If you happen to encounter a jellyfish on land, do not touch it; even though it might be dead, its tentacles can still sting you. In the water, it can be hard to spot jellyfish, but don’t panic if you happen to brush up against one. Head to the nearest lifeguard station and have the lifeguards treat the sting with a mixture of water and vinegar. If you’re close to home when the sting occurs, place the infected area under hot water, as the tentacle’s barbs are protein-based and will break down in the warm water. Jellyfish stings can be extremely painful, and depending on the type can leave scarring or cause other health problems if not taken seriously. Just like with a bee sting, how someone reacts to a jellyfish sting depends on many aspects from age to health and allergies. Be sure to seek medical help should the wound get worse or if any other symptoms arise.