How many times have you walked the beaches of Hilton Head Island and seen a horseshoe crab on the sand? Large and dark, with long pointed tails, multiple legs and flat “book” gills on their underside, they are commonly seen on our beaches, both alive and as skeletons. They are from a very ancient time, and look more like a Frankenstein experiment gone wrong than a modern-day crab; but then, they are not really crabs.

Horseshoe crabs actually are most closely related to spiders, scorpions, ticks and mites, and their ancestors have existed on earth from a time before the dinosaurs, a time when the first fish with jaws appeared in the oceans and glacial melting brought about a significant rise in sea level.

Each spring and summer, beckoned by lengthening daylight, male horseshoe crabs migrate shoreward from deeper ocean waters and await the arrival of the females. As the females arrive, they release the horseshoe crab equivalent of Chanel No. 5 (called pheromones) to signal the males that it is time to mate. On a new or full moon and a high tide, the female lumbers ashore, dragging multiple males with her.

While all this is going on along the East and Gulf coasts, another species that is amazing in its own right arrives on the scene: a robin-sized shorebird called the red knot. This bird migrates from its Arctic breeding grounds to the southern tip of South America, an annual round trip of more than 18,000 miles.

On its way back to breed, the birds stop to rest and gorge themselves on the abundant horseshoe crab eggs, which are rich in fat and help the red knots add weight for the rest of their journey and subsequent breeding. Without this food source, many of the birds would not survive the migration, nor would the survivors have the energy to breed successfully. In fact, as horseshoe crab populations have declined, so have red knot populations, so much so that the red knot was placed on the threatened species list in January. 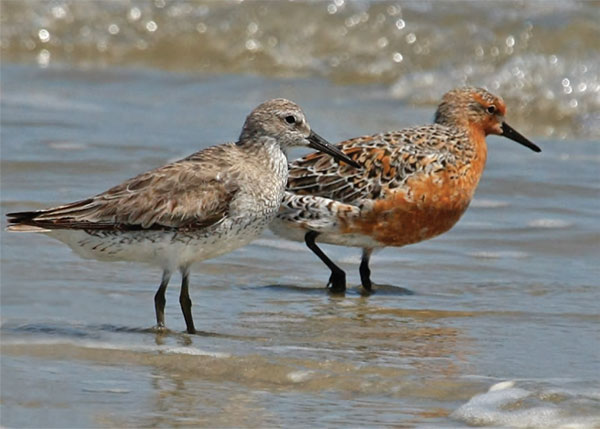 Scientists attribute the horseshoe crab decline to heavy harvesting by humans. From the mid-1800s to the 1960s, horseshoe crabs were harvested for fertilizer and livestock feed, with as many as 4 to 5 million taken annually from the late 1920s to the early 1930s. Today, they are harvested as bait for the conch and American eel fisheries and for “bleeding” by companies who sell the blood to the medical industry.

It turns out that the chemical properties of horseshoe crab blood allow it to be used to test drugs and medical devices for bacterial contamination. Although these “bled” animals are returned to the ocean, scientists estimate that 5percent to 30 percent of them don’t survive the process. Scientists who study red knots claim that the bird’s population will not increase until horseshoe crab numbers increase.

Horseshoe crabs play an important part in the ecology of the ocean, serving as food for sand shrimp, crabs (blue, green and spider), finfish (such as flounder and striped bass), sharks and loggerhead sea turtles.

They are also an energy link between the ocean and the land environment, serving as food for gulls, numerous shorebirds, red fox and raccoons. Horseshoe crab feeding behavior may play a pivotal role in the survival of pinfish and juvenile blue crabs.

But that’s a whole other story.