All of the above phrases describe the many roles that American alligators play on Hilton Head Island. Alligators belong to a group of reptiles known as crocodilians, which also include crocodiles, caimans and gharials. Crocodilians are closely related to dinosaurs, but their closest living relatives are birds.

Alligators on Hilton Head are referred to as keystone species, because their presence on the island helps to fashion the environment and influence the types of species that live here; without alligators, the island’s environment and wildlife would be very different. For example, alligators are environmental engineers, changing the environment by their behavior. In times of drought, alligators dig “gator holes,” shallow depressions that bring groundwater to the surface. On barrier islands like Hilton Head, this is a critical service for wildlife, which depends on fresh water for survival. By repeatedly swimming and walking through ponds, alligators also control the growth of aquatic weeds, helping to keep open water. 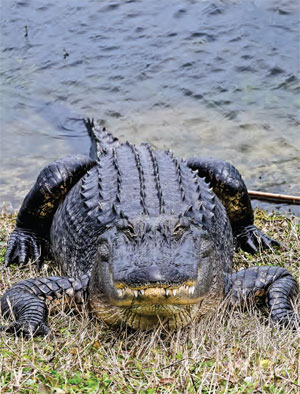 Alligators have a very varied diet, including deer, small mammals (e.g. raccoons, opossums), wading birds, snakes, turtles and fish. Their presence helps control the populations of these species, which in turn can influence all of the species that each of their prey feeds on. In turn, these species, with the exception of deer, prey on alligators when they are still in the egg or newly hatched. So alligators fulfill their role as wildlife manager by both hunting prey and providing food for other species.

Among reptiles, female alligators are one of the most tender and dedicated mothers. The female lays her eggs near a body of fresh water and covers them with vegetation; the heat from the rotting vegetation helps keep the eggs warm. Like some other reptiles, the temperature inside the nest during incubation also helps to determine the sex of the young. This large mound of vegetation attracts many other species, which use the nest as safe nesting areas (e.g. turtles, snakes, lizards) and hunting areas (e.g. small mammals, birds and reptiles), since it is guarded by the female for more than two months. When the eggs begin to hatch, the young call to the female from inside the nest, and she digs up the nest and brings the hatchlings down to the water in her jaws. The young remain with the female for up to a year and are defended by her against predators like wading birds. So alligator nests provide nesting and hunting habitat for many other species.

Every year on Hilton Head, alligators are destroyed because of their interactions with humans. Many of these interactions occur because people feed or harass the huge creatures. You can help protect our community’s alligators by avoiding interaction with them. They can move very quickly, especially when warm, so never approach an alligator. Don’t harass an alligator or swim in water (or let your pets swim in water) known to be an alligator habitat. Above all, never feed alligators. Alligators fed by people come to expect food with each human encounter, and if they aren’t fed, they may act aggressively. Because alligators are experts at finding their way home when relocated, any alligators deemed to be aggressive are killed rather than relocated.

With the help and respect of their human neighbors, alligators can continue to provide critical natural services to the island, as well as to delight us with their presence, well into the future.