HURRICANE SEASON IS UNDERWAY AND IT’S A GREAT TIME TO MAKE SURE YOU’RE PREPARED.

THE SEASON IS FROM JUNE 1 TO NOV. 30, WITH THE HIGHEST PROBABILITY FOR A STORM STARTING MID-AUGUST AND ENDING LATE SEPTEMBER.

Since 1804, 12 hurricanes have had an impact on the area. The most recent was Hurricane Hugo in 1989. No damage was done on Hilton Head Island, but the mandatory evacuation took an economic toll. Floyd also came close in 1999, but only resulted in a few downed branches (although anyone who went through that evacuation will tell you it was a challenge, to say the least).

The most serious hurricane was Gracie in 1959. With winds up to 140 mph, the Category 4 storm resulted in fi ve local deaths and caused $1.5 million in damages in Beaufort and Jasper counties. In 2004, Beaufort County was placed under voluntary evacuation for Hurricane Charley. It was the last local evacuation so far.

The greatest threat to life and property associated with a hurricane or tropical storm is storm surge. Other dangers include high winds, tornadoes and inland flooding associated with heavy rainfall that usually accompanies these storms. You can take steps to minimize the loss of life or property during a hurricane. Remember, if a hurricane occurs, emergency responders may not be able to immediately reach you. You should be prepared to be self-sustaining for at least three days.

Have a hurricane plan and ensure everyone in the household knows the plan.

If a hurricane is likely, you should:

You should evacuate under the following conditions:

If you are unable to evacuate, you should:

CATEGORY, SUSTAINED WINDS, TYPES OF DAMAGE DUE TO HURRICANE WINDS 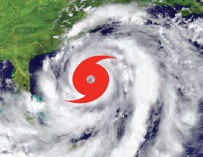 Category 1, 74-95 mph:
Very dangerous winds will produce some damage. Well-constructed frame homes could have damage to roof, shingles, vinyl siding and gutters. Large branches of trees will snap and shallowly rooted trees may be toppled. Extensive damage to power lines and poles likely will result in power outages that could last a few to several days.

Category 2, 96-110 mph:
Extremely dangerous winds will cause extensive damage. Well-constructed frame homes could sustain major roof and siding damage. Many shallowly rooted trees will be snapped or uprooted and block numerous roads. Near-total power loss is expected with outages that could last from several days to weeks.

Category 3, 111-129 mph:
Devastating damage will occur. Well-built framed homes may incur major damage or removal of roof decking and gable ends. Many trees will be snapped or uprooted, blocking numerous roads. Electricity and water will be unavailable for several days to weeks after the storm passes.

Category 4, 130-156 mph:
Catastrophic damage will occur. Well-built framed homes can sustain severe damage with loss of most of the roof structure and/ or some exterior walls. Most trees will be snapped or uprooted and power poles downed. Fallen trees and power poles will isolate residential areas. Power outages will last weeks to possibly months. Most of the area will be uninhabitable for weeks or months.

Category 5, 157 mph or higher:
Catastrophic damage will occur. A high percentage of framed homes will be destroyed, with total roof failure and wall collapse. Fallen trees and power poles will isolate residential areas. Power outages will last for weeks to possibly months. Most of the area will be uninhabitable for weeks or months.