KARA ARTMAN’S WORK OFFERS A WINDOW INTO THE PAST

Kara Artman has always been inspired when walking by the water. She loved her time along the Windy City rivers at the School of the Art Institute of Chicago. She moved to the Lowcountry after graduating in 2009 and has been walking the ocean edges ever since. 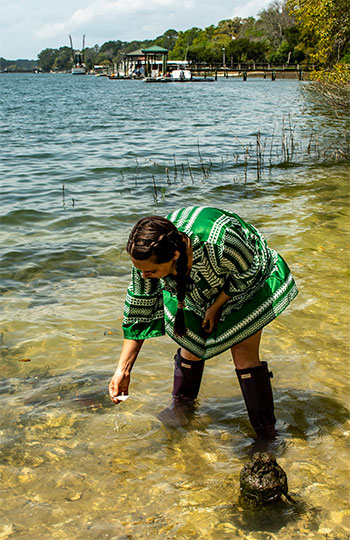 She and her partner, fellow artist Tate Hallquist, have found all kinds of hidden treasures in the region’s pluff mud, including marbles, old clay pipes and a Victorian-era whistle.

“Oh, the things you find along these tidal waters,” Artman said. “These started out as leisurely walks, not hunting expeditions, but we just rolled with it and were just amazed at the finds.”

Her most plentiful discoveries have been historic glass bottles. Artman has used her ceramics expertise gained in Chicago to create a unique lane in the art world.

“I started finding tons of bottlenecks, and the hand-tooling marks were fascinating,” she said. “I became a forensic detective and tracked down the histories of each bottle.”

She has shared her 80-deep-and-growing collection through a trilogy of trifle showings at art shows across the country. The first, “Unconsidered Trifles,” featured the original bottle tops with woven copper bottoms and was on display at the Spartanburg Art Museum in 2017. Her second, “Reconsidered Trifles,” featured casted replicas of originals dipped in popping, modern colors.

“We told the stories of the bottles to a different audience with bold hues on the bottles,” she said.

“Reincarnated Trifles” takes broken pieces of glass and turns them into a distinct work. Her latest collection showed at the famed Artfields exhibition in late April and is now on display at the Contemporary Clay Biennial in Grand Junction, Colorado. The markings and craftsmanship of the bottle necks are extraordinary windows into the past. 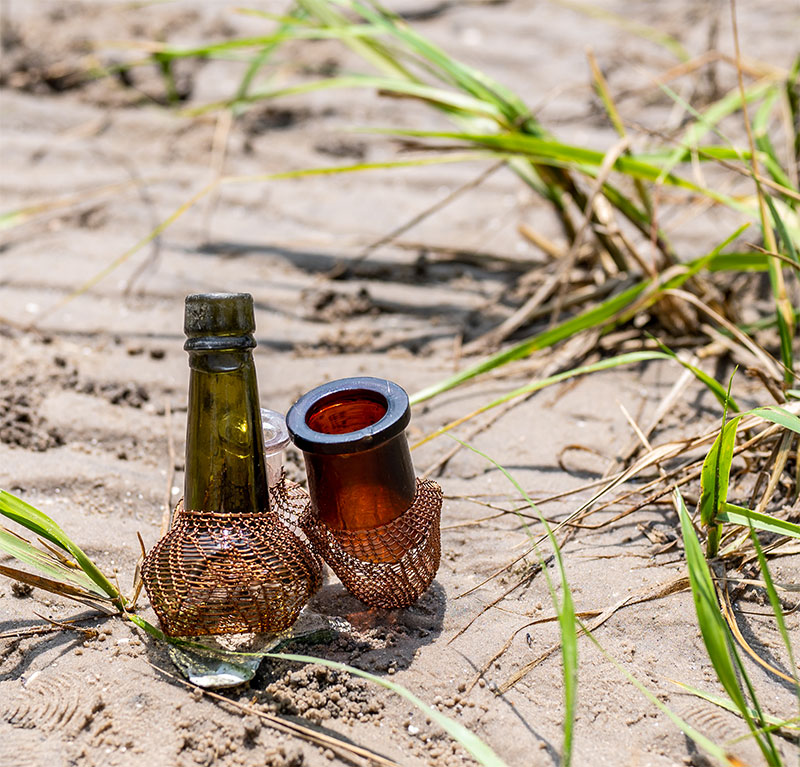 Artman’s oldest bottles come from the 1850s and 1870s. Providence-based Rumford Chemical Works manufactured Horsford’s Acid Phosphate in the mid-1850s, a “tonic for the weak and disabled” mixed with water to help with everything from indigestion to nervousness and physical and mental exhaustion.

Then there’s Stoddarts Peerless Liquid, an 1870s upstate New York-based face make-up later found to be a skin and eye irritant. Another older bottle comes from Boston-based Dunbar and Co., the Wormwood Cordial, featuring a drink made from the woody shrub with a bitter taste marketed for digestive ailments in the mid- to late-1800s. 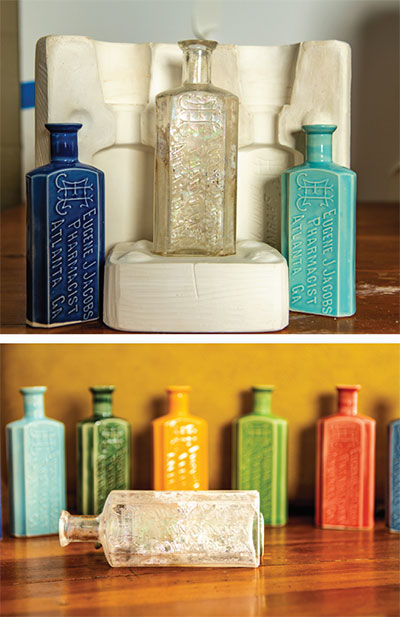 Many of the older bottles are stunningly preserved examples of the fraudulent elixirs that traveling salesmen peddled out of their suitcases traveling town to town.

She also found some closer-to-home artifacts, including an 1852 Savannah bottle from John Ryan, the first soda manufacturer in Georgia who ceased operations during the Civil War because his glass came from the North.

Her “youngest” bottle is a rare glass container of Clorox that was manufactured from 1933-36 as “the modern way to lighten housework.” She also has another known brand bottle, an 1880-1890s glass bottle of New Jersey native Robert Chesebrough’s concoction, Vaseline — a gold medal winner at the Paris exposition of 1889.

Artman has also found a niche in creating molds of the bottles and reselling them on her website, karaartman.com. She has molded 32 bottles in all, with 25 of them still in production.

“You can only cast so many of these bottles before the mold degrades, but it just allows us to create a new series of bottles so we’re not flooding the market,” she said.

A trio of her discontinued bottles were cited in the 1919 Food and Drug Act as examples of why we need regulation from the elixir peddlers.

Davis Vegetable Pain Killer — “used for soldiers and horses alike” — was almost pure opium with just a touch of alcohol. Mrs. Winslow’s Soothing Syrup was marketed to help teething children but became known as “The Baby Killer” as the mostly morphine mixture caused a spate of deaths. 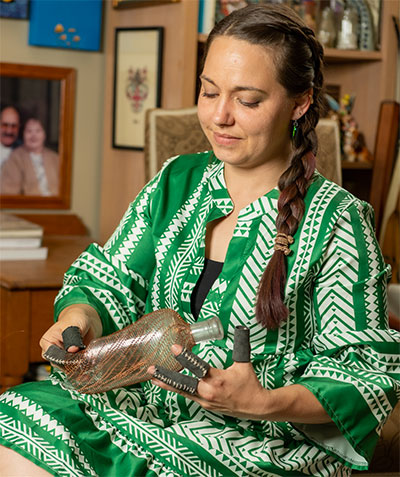 And there’s Duffy’s Malt Whiskey, a medicinal whiskey made through Prohibition and said to be a fountain of youth, as its customers supposedly lived to be 130 years old.

Her favorite Lowcountry find is from the Owens Company, a glass manufacturer based in her hometown of Streator, Illinois, a tiny town bordered by cornfields about two hours southwest of Chicago.

Artman comes from a creative bloodline filled with expert knitters, woodworkers and thespians. She does work in many mediums including ceramic sculptures, oil paintings and abstract drawings but feels fortunate to have come upon a niche with the bottles.

Artman has won Society of Bluffton Artists competitions and is a teacher at the Full Spectrum Studio for adults with disabilities.

Telling the stories behind her work also allows her to advocate for being shepherds of the environment. “I have always hauled plastic out of the waters, and we decided to measure just how much last year,” she said. The total: more than 700 pounds of plastic removed in 2021 alone.

“We need a constant effort from everyone to keep what we have. These waters provided me with inspiration, so I want to do my part to protect the beauty around us.”