Caviar is harvested from the roe, or eggs, of female sturgeons. The bony, dinosaur-like fish was widely found in the Caspian and Black Seas and the rivers that fed them, resulting in a caviar trade from Russia and Iran that originally was relatively inexpensive. But sturgeons are slow to grow, taking around 15 years to mature, and the world had developed a taste for the delectable little eggs. In their haste to harvest the roe, caviar suppliers destroyed much of the female sturgeon population, sending the cost of Russian caviar skyrocketing. 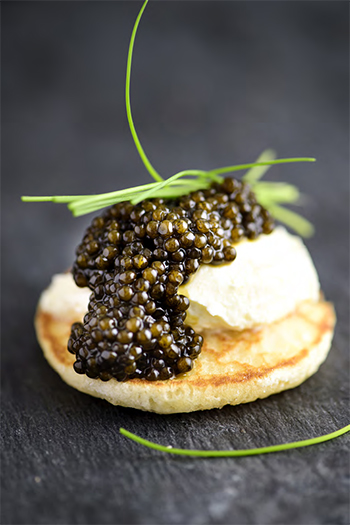 In 2005, after the Beluga sturgeon was declared critically endangered due to overfishing, the U.S. banned imported Beluga caviar — leading to a fledgling caviar market in other parts of the world with a focus on sustainable harvesting practices.

Around the globe, aquaculture farms are popping up to meet the world’s demand for caviar. Most follow a code issued by the Convention on International Trade in Endangered Species that requires caviar producers to include labels indicating the type of caviar, whether it comes from cultivated or wild sturgeon and where it was produced. Each label must also include a unique batch code to track quality.

Ready for a taste of this delicious comestible?

Harbour Town executive chef Farid Ahmed is planning a champagne and caviar dinner at Sea Pines, paring Moet bubbles with caviar from Uruguay’s Polanco, which harvests its roe from the rich, fertile Rio Negro in South America. At the December event, representatives from both companies will be on hand to answer questions and discuss pairings. On the menu: a tasting of Polanco’s caviar offerings followed by a three-course dinner featuring smoked trout with a Siberian reserve caviar; beef tartare with Oscetra caviar and poached quail eggs finished with smoked cream cheese; and a butter, herb and mushroom poached lobster tail topped with Sterlet Premiere caviar in a whipped lobster jus.

“It’s almost an enhancer for me for the food,” Ahmed said of pairing his dishes with caviar. “Caviar is great by itself, but when you pair it with food it really pops. When I’m pairing it with something fatty, it just makes the food come alive.

At Husk Savannah, executive chef Chris Hathcock crafts an ever-changing menu of Southern ingredients. The caviar he serves is no exception, with three options from Tennessee, Mississippi and North Carolina. The caviar service includes gluten-free, Johnny cake-style cornmeal blinis presented in their own decorative box with sides of egg jam and house-made vinegars. Elsewhere on the menu, diners will find sunburst trout roe topping a fish entree and whole fish fillets layered with a creamy mousseline. If champagne isn’t the drink of choice, Hathcock suggests a more Russian approach: “A super-chilled shot of vodka.”

Of course, indulging in caviar isn’t limited to an evening out. Upscale grocery stores including Fresh Market stock several varieties, including American hackleback, farmed Ossetra and farmed sevruga, which is similar to Beluga, but a bit more intense. The store also offers wild paddlefish eggs and salmon roe.