“I had the idea on a whim to reach out to The Cypress retirement community to see if we could do anything for them,” said Phillip Evans, 17, whose grandparents are residents there. “So I made a call to their lifestyle director (Randi Selman), and she asked us to come out and dance with some of the widowed members who never had partners at the dances.”

The students put on their best dancing shoes and attended the holiday dance in December. 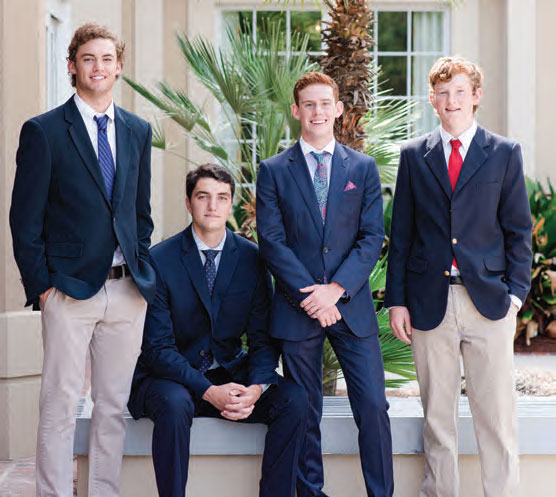 The experience came naturally to Evans.

“I was very comfortable,” he said. “I used to ballroom dance back when I was 7 to 10 years old, and I was the youngest person there so I was very accustomed to dancing with people who were much my senior. I felt right at home.”

Not so much at first for some other team members, including Michael Caramello.

“The first time it was a little bit awkward, but after we saw how much they were enjoying it, we kind of really got into it,” said Caramello, who is the president of the National Honor Society. “We just kind of gave them a good time and help put them in the holiday spirit.”

Little did the five students — who in addition to Evans and Caramello included Jackson Tomaszewski, Hayden Schwartz and Jack Maggard — know at the time that their lives were about to change, as would the lives of the senior citizens they danced with.

“We were received so positively,” Evans said. “It was such an uplifting experience for us and the members that we reached back out to The Cypress and said, ‘Hey we really want to come back and do anything we can to be around the members and help them out.’”

The students decided that a lesson in technology like iPhones, smartphones, tablets, computers, the internet and social media was a pressing need.

When the group showed up the first Saturday morning in January at The Cypress, only three residents attended. But soon the lessons were standing room only.

“The word spread very quickly; people would be lined up at the door when we showed up at 10 a.m.,” Evans said. More than 25 residents eventually would drop by for the group’s question-and-answer period and then one-on-one instruction.

“The internet was a very foreign concept,” said Evans, who as a sophomore founded his own pedicab service, the first and only one on the island. “We’re still working on it.”

A special treat for Evans and his grandparents, Carolyn and Doyle Evans, was sitting down for lunch together every week after the tech workshop.

“The things we teach them, they can use on an everyday basis to help improve the quality of their lives,” Caramello said. “After the first week or so, we were talking with members of the community, hearing their thoughts and they just absolutely adored us.”

One volunteer weekend became two, three and so on, and the team never considered stopping. After only three weeks, each team member had already surpassed the 20-hour voluntary commitment. To date, each has amassed more than 200 individual hours.

“I was thinking to myself, ‘Wow, this is really great what we’ve been doing, and we absolutely have to continue this,’” Caramello said.

Evans agreed: “We originally only planned to do this for a few weeks … we figured it was too big of an opportunity to pass on.”

The months passed. The students attended the Spring Fling dance at The Cypress — much to the delight of their older dance partners — and their summer plans took shape as their calendar opened up.

Evans reached out to the TidePointe retirement community, spoke with lifestyle director Diane Kastler, and a Wednesday morning tech workshop in June was promptly scheduled. Throughout the summer, the students would join residents at TidePointe and The Cypress every week. Now that the students are back in school for their senior year, they alternate their time weekly between the two communities.

“They are the best group of kids,” Kastler said. “They are so helpful.”

One familiar refrain she hears from participating residents is, “‘If this is what the young kids are today, then our country has a great future’…that was said so many times. They think the world of these kids.”

The accolades are mutual.

“The first thing is probably the amazing life lessons and hordes of experience that gets poured on me every time I get to talk with these people,” Evans said. “They truly are members of the generation that have put us where we are today as a society. I learn the traits and tools that they used to find their success. I’m applying this to my life now.

“We have a lot of fun just talking with them and becoming friends with them,” he added. “It’s a very rare kind of situation where members of our generation and their generation get to interact in a setting outside of some kind of family situation.”

Caramello’s favorite moments have been “hearing their stories and their backgrounds, just because some of these people are highly accomplished and esteemed. And the advice they have to share, and to see how much they appreciate what we’re doing … it’s very heartwarming.”

Along their journey, the students have set up a nonprofit organization to spread the news about outreach and assistance programs for senior citizens.

“I think this kind of volunteer service has an immense value but has been underdeveloped,” Evans said. “But I really do see it having a value not only on a local scale but around the country. We’re trying as hard as we can to get the word out about our service and what we’ve been doing.”

For more on the students’ efforts, go to www.ytoprogram.com.