It's only natural to want that.

If you are single, divorced, separated or widowed, surely you have had moments when you’ve thought, “Wouldn’t it be nice if I could share this with someone by my side?” It’s only natural to want that. Companionship — and love, if the romantic stars are aligned — matters to most people.

Years ago, we would meet potential mates at church, through newspaper classifieds, at social events, at the local pub or on blind dates.

In 1988, a creative artist I worked with responded to a classified ad in the newspaper posted by a man looking for an engaging woman who was creative, smart and fun. He owned an up-and-coming business, and she was everything he was looking for. They met, dated, fell in love, got married and had two children a couple of years later.

Back then, no one really wanted to admit they were looking for dates that way, let alone seeking a lifetime companion. It perhaps signaled desperation, or a last chance for romance, or an inability to find a great date the “normal” way. It was a hidden pursuit shrouded in secrecy because of a cultural stigma attached to it.

About a dozen years ago, the daughter of my karate master announced she was getting married to a Marine she had met on an online dating site. She herself was a fourth-degree black belt who kicked my butt many times, but she also was very attractive, accomplished and mature at 24. 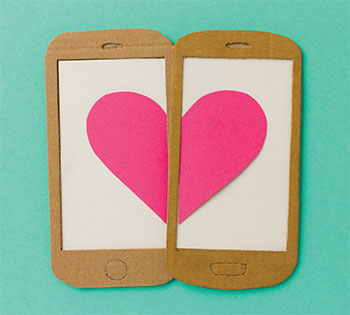 Until then, I had never heard of online dating.

I didn’t really think about it again until about four years ago, when I was in a personal transition. I got divorced after 22 years of marriage and two 20ish-year-old children. I didn’t feel comfortable or ready to start dating right away. I needed to feel single again — to be moving forward in my life, not looking back and carrying a ton of emotional baggage. No one wants to hear about your past personal issues while on a date.

Six months of singlehood later, I thought I was ready to date again. I wanted to meet women and have fun, perhaps have a serious relationship, but definitely without marriage in mind. So I turned to the internet, where a variety of sites offer to connect you with your perfect match. Each asks what you’re looking for in a relationship, as well as other questions about you and your interests.

I knew it was unlikely that a good-looking, educated, compassionate woman who loved music, the arts, nature, travel and wine would just happen to come knocking at my front door to introduce herself. I tried to keep my expectations reasonable.

When I found someone on a dating site who was attractive and articulate in her profile, and showed a few flashes of off-the-wall humor, I would reach out to her with a brief, interesting message. We would write back and forth via the dating site, then exchange email addresses, then phone numbers and then schedule a first date. This process could take a week or a month. There is no surefire step-by-step manual for online dating.

Over a year or so, I dated about a dozen women, plus another 10 or so I spoke with but didn’t date. About half were one-and-done dates, three or four were two dates, and one or two lasted for three dates. Then I met my eventual girlfriend of nearly three years on match.com and we moved in together last month. There were no real surprises when these women and I met in person; they all pretty much matched the profile they presented online. A successful date really came down to chemistry, and whether I wanted to see her a second time.

During this time, I encouraged my widowed sister, who was in her mid-60s, to at least consider communicating with a man online. After many months of indecision, she finally signed up with match.com, but only to view pictures and profiles. Then she took the plunge. No responses. Her married daughter helped her rewrite her profile and select different profile pictures. It worked; she met a man and they’ve been together for nearly two years.

Reluctance to indulge keeps wannabes away from romantic possibilities; jump in when you’re ready and join the nearly 40 million people who are actively scrolling through profiles on their phones or their computers. More men than women do it, and most report that common interests are the most important aspect in dating (“travel” is the most commonly used word), followed by “physical characteristics” as a distant second, according to Statistic Brain Research Institute. Most women prefer a “nice guy,” and most men are looking for a “modern career girl.”

On personal profiles, men lie most about their age, height and income. Women fib most about their weight, physical build and age. Eighty-one percent report they fudge the truth on something.

Some dating sites are free, like OK Cupid and Tinder. Others charge a monthly fee for membership. Some users subscribe to several sites simultaneously. Overall, the online dating industry generates more than $1.8 billion annually.

The most popular site among men and women ages 25 and older is match.com, which has more than 24 million members. Other popular sites are zoosk.com, for younger singles; ourtime.com, for mature singles; eharmony.com, for those 25 and older; and elitesingles.com, for single professionals. Group-specific sites attract blacks, gays, lesbians, Jews, Christians, farmers, single parents, geeks, singles with food allergies, men looking to cheat on their wives (think Ashley Madison) and many others.

Here is some online dating advice:

Take a deep breath, calm your nerves and just go for it.

Looking for a little romance or companionship in your life? Find a date online or via an app.

Single adults are out there. On Hilton Head Island itself, there are 11,914 of them —17.2 percent of them have never been married, 5.3 percent are divorced, 3.3 percent are separated, and 2.1 percent are widowed, according to Point2Homes.

Here are a few suggestions for a casually cool first date:

Also consider: Sitting outside at the Rooftop Bar at Poseidon restaurant at Shelter Cove Towne Centre, sipping a rum punch with a side dish of sashimi and watching the sun go down along Broad Creek. Taking in the beautiful Hampton Lake views at Backwater Bill’s in Bluffton while munching on Lowcountry-style fried flounder bites. Wandering in and around the more than 80 gift/specialty shops, restaurants and kiosks at Hilton Head’s Coligny Plaza, then crossing the street for a stroll along the Atlantic Ocean. Browsing through the Smith Galleries at The Village at Wexford or the Pluff Mudd Art Gallery in historic downtown Bluffton for artistic inspiration and conversation. Stuffing a picnic basket full of deli goodies, salads and veggies and finding a table lakeside at Jarvis Creek Park. Heading over to the Neptune statue at Shelter Cove Harbour from 6-9 p.m. on May 19 to catch Deas Guyz perform your favorite songs for free.

The author of this article, Dean Rowland, with his girlfriend of three years. The couple first met on www.match.com .