WHITLEY DEPUTY AND THE B-TOWN PROJECT RETURN TO THE HERITAGE FOR ANOTHER CHANCE TO BRING DOWN THE HOUSE.

Whitley Deputy began his musical career the way most of us do, banging on pots and pans and garbage can to a rhythm that only the musician can hear. Growing up in then-very-rural Pritchardville, he can fill hours with stories of the Lowcountry he remembers, an untamed place unmarked by gated communities, one where kids would happily throw themselves into murky waters without fear of alligators or water moccasins. (That’s not to say they weren’t there; there just wasn’t any fear).

And while most of us abandon our musical dreams along with our drums at some point, Deputy kept at it with the sort of sort of laser-tight Type-A focus he seems to bring to bear on every aspect of his life. Ask him about anything: nutrition, religion, science, the arts, and he can speak from a place of remarkably well-researched confidence. 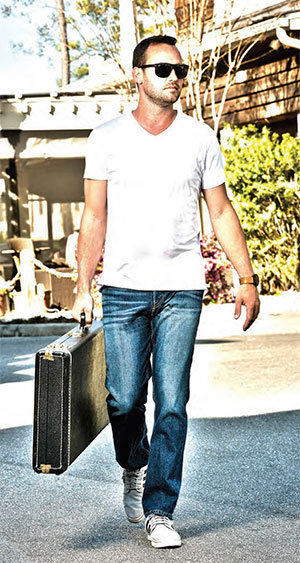 In another person, his intensity might come off as intimidating, but Deputy carries with him an easy smile and gentle demeanor that brunt the edge of his fiercely precise personality. That said, He is not a person who does much by half-measures. So you know when he finally did abandon the drums, it was for a good reason.

“I realized I couldn’t lead a band from behind,” he said. “So I picked up guitar and just started learning everything I could about musical theory, harmonies, things like that.”

From there, Whitley Deputy and the B-Town Project exploded, providing a soundtrack to Bluffton’s festival scene that happily dances across the borders between funk, blues and R&B. Around a nucleus of three stellar talents — Deputy, legendary bassist Delbert Felix and drummer Derrick Larry — flies a constantly-shifting array of musicians that form the ever-changing B-Town Project. Deputy has a keen eye for talent, bringing in musicians from as far away as Jacksonville to fill in for larger gigs, but there is one thing he demands above all else from his band: flexibility.

That’s because, despite his expertise on the drums and the guitar, the one instrument on which Deputy is a true master is the moment. It all stems from a moment of clarity he attained during a poolside solo gig.

“Last summer, I was playing this solo gig by a pool, trying to play what I thought they might want to hear,” he said. “I wasn’t getting much of a response, and I realized ‘You know what? I’m miserable right now. I’m just going to play what I want to play.’”

The reaction from his crowds wasn’t immediate, but it was palpable as Deputy threw the set list away and started playing from his heart, from his gut and from his audience.

“I stopped being so concerned and started playing what I feel. And that’s what an artist should do,” he said. “It’s not about what you can do. It’s what you make (the audience) feel like.”

As a virtuoso in reading an audience, Deputy will have his work cut out for him when the B-Town Project plays to the teeming throngs of the Heritage this year. But Deputy, for his part, isn’t worried, especially if it’s anything like the last time they played the tournament.

Their three-hour set two years ago showed Heritage crowds what a tight-knit group of musicians, fronted by a kid from Pritchardville, can do.

“We started the gig, then three hours later it went from no one there to you not being able to walk through it. And they were calling for an encore,” he said. “And it was awesome.”

Whitley Deputy and the B-Town Project play the Heritage from 5 to 7 p.m. April 17.