A MULTI-TALENTED NASHVILLE PERFORMER FINDS A NEW LEASE ON LIFE IN THE LOWCOUNTRY. 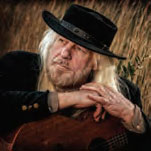 And you’d probably be right. Again, depending on how the mood strikes him.

To start with, he is in fact a seasoned veteran of the rock ‘n’ roll business. A recent transplant from Nashville, Galloway spent years as a guitar player and front man for various bands, touring the country and sharing the stage with legends from Lynyrd Skynyrd and the Doobie Brothers to Faith Hill.

These days, thanks to a new life as an independent recording artist, he’s stepping away from the road to soak in the scenery north of the Broad.

“After I signed a contract with Joe Meader at Grand Entertainment, my wife, Carol, and I looked at each other and said, ‘OK, we can live anywhere in the world.’ I have my own studio, and being a writer I can write anywhere,” he said.

Anywhere turned out to be Port Royal, just off the water. “The moon through the trees here, with the Spanish moss dripping down … it’s just magical. I’ve found myself very inspired. And not just in music.”

That musical inspiration manifests in shows around the area with his four-part band, plus jam sessions with Beaufort-area acts like Snazzy Red. And Galloway continues to record, laying down tracks that range from foot-stomping Southern rock songs to soulful ballads. As to the other inspiration?

Well, that speaks to Randy Galloway as soulful artist.

“I’m thinking about doing some acting while I’m down here,” said Galloway, who appeared in seven episodes of ABC’s “Nashville” as a featured extra. “I don’t want to say I have the acting bug, but I really enjoy it.”

Galloway has also been inspired to pick up the keyboard (as in the one with the letters on it) to do some writing. His book, “Quads,” was published in Kudzoo Magazine, where he’s been a regular contributor.

He’s a man of many talents, including one that speaks to that intimidating first impression he can cut.

“I did quite a bit of bounty hunting for the state of South Carolina,” he said. “In seven or eight years, I caught 862 fugitives.”

During his successful side career as a bounty hunter, Galloway earned a reputation as someone who always gets his man. He rose to such prominence in his field that he was even featured in a two-part Fox Carolina story called “Bounty Hunter in the Upstate.” For Galloway, at least, it turned out well.

“I was able to catch one of the state’s 10 most wanted while they were filming. He actually was a good guy, he just made some mistakes.”

Galloway’s latest album, “Midnight Stories,” is available on iTunes. And keep an eye on your local live music schedule for the RJ Galloway Band.