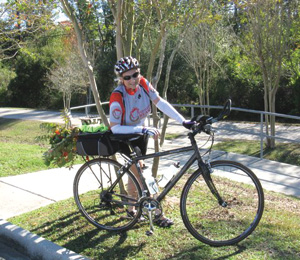 For Moss Creek resident Rosanne Adams, turning 70 is a reason to celebrate. And while most of us might opt to ring in our septennial with a quiet dinner with friends or a night out on the town, Adams chose a different tack.

She’s going to bike the entire length of the Mississipi River.

“We leave from New Orleans on May 3 and our destination is Lake Itasca in Minnesota, right at the headwaters,” said Adams.

Adams will make the trek as part of a group called WomanTours, a pack of wanderlust-infused ladies who make it a habit of criss-crossing the country once a year. She’s been riding with them since 2003.

This trip, however, has a special purpose beyond just taking in America at 12 miles an hour. Adams is collecting donations, support and funds from her trip and donating them to the Moss Creek Marines, a group of United States Marine Corps veterans, Navy Corpsmen and spouses of deceased Marines. The Moss Creek Marines “adopt” Marines in combat zones and help give them a taste of home through “packages of personal, comfort, and fun items to make life more bearable.”  according to their website.

To date the Moss Creek Marines have adopted more then 27,100 Marines, serving in 61 combat units in Iraq and Afghanistan.

So far, Adams has raised $3,000 for the cause, starting with an old family friend who just happens to be a famous country music star, Darius Rucker.

“Darius was in college with my son,” Adams explained. “My son was in the Naval ROTC and went on to join the Marine Corps, and Darius was acquainted with Marines around here. He’s very generous.”

To donate your money or support for the Moss Creek Marines, visit www.mosscreekmarines.com. To learn more about Adams’ ride up the river, click here.

You can also mail a check to: