Well, June, you held on to the title as long as you possibly could.

For centuries it seems, you’ve been heralded as the “Most Popular Month for Weddings™,” based largely on the fact that you’re named after Juno, the goddess of marriage, which somehow meant that couples would find favor, and fertility, in their married lives when they wed under your summer moon.

All of this seemed a little sketchy, since Juno married her own brother, Jupiter, but whatever. We overlooked it. Because June is just that fetching, with its warm breezes and fireflies and longest day of the year. 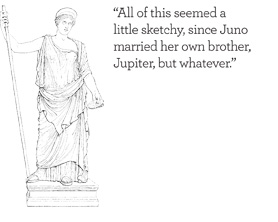 Plus for a long time a June wedding made good business sense. Back when weddings were more focused on the practical and less on the pretty, a wedding was more of a transaction – dowry paid, bride delivered – than a celebration. And getting married in June meant the new wife could (Juno willing) get pregnant right out of the gate and still be healthy enough to help harvest the crops that fall. Then, after a brief pause from farming to have the baby, she’d be back in shape to help with the next year’s harvest as well.

Perhaps the largest feather in your cap was placed there in the Middle Ages thanks to your position directly after May, the month of (pausing to shudder) the annual spring bath. Legend has it that brides and grooms wanted to wed when they were smelling their best, which is to say not their worst, which is to say June. But let’s be frank here, June: Medievalists have long laid to rest the myth that people rarely bathed in the Middle Ages. This “annual bath in May” thing just isn’t true, is it? Some marketing scheme put out by you, perhaps? Doesn’t really matter. We’ve had indoor plumbing for quite some time now, and frankly the legend of the annual bath is the only thing around here that still stinks.

Look, we’re not saying you’re not a lovely month in which to wed. Your weather’s perfect, your days are long, and your calendar’s completely free of holidays to annoyingly bind up our loved ones’ schedules and make finding a free weekend for 200 people completely impossible. We’re just saying we’ve been choosing you for those reasons, not all the hokey, if not disturbing, traditions of yore. (I mean really, Juno’s own brother?) Let’s face it, these days we’re not “harvesting crops” so much as “stopping at the farmer’s market” or “waiting for our weekly CSA box to get here.”

And so, in recent years, your “Most Popular Wedding Month” crown has tarnished, overtaken by the blazing blue skies of July and August. Even those cool, colorful September days are helping to edge you off the throne, according to statistics put out by the Association for Wedding Professionals International. Basically, it’s over, June. 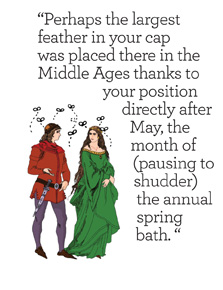 We’re bringing this up not to kick you when you’re down but to say, Don’t sweat it. You’re still awesome! You are summer and ice cream and “School’s out!” all rolled into one. And we love you more than July and August (speaking of sweating, sheesh); it’s just that sometimes that’s the only time we can book a country club around here and our teacher friends can definitely make the trip. (Sorry!)

What we’re saying is don’t let the numbers fool you; the statistics speak to popularity, but not perfection. And you, June, are perfect. So when people ask if you still believe you’re the best month for a marriage, say it loud and proud, for old time’s sake: “I do.”

Robyn Passante is a freelance writer and author of two books on weddings. She got married in October and is now feeling a little guilty about it.