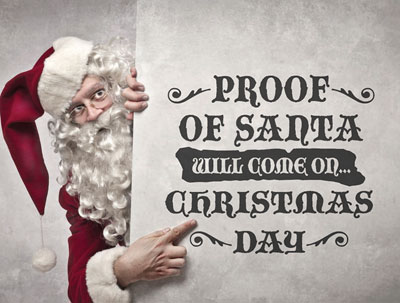 “ Proof of Santa will come on Christmas Day, offline, in real time”

When I was a kid, Santa became real to me every Christmas morning with a simple kick of my foot.

I don’t know how it all went down at your house, but in ours, Santa would fill our empty stockings in the living room and then leave them at the foot of our beds to find in the morning. The stockings had been crocheted by my grandmother using a grandmother’s generosity and some sort of elastic yarn, so each elephant trunk stocking easily stretched across the width of a twin bed. (“Favorite Grandmother” status: Secured.)

My sisters and I would lie in bed on Christmas Eve with restless anticipation, wondering, waiting, trying to stay awake. Was he real? Was he really real? We’d eventually drift off, of course, only to wake a few hours later in the quiet stillness just before dawn. As the sleep fog lifted, we’d shimmy our bodies lower under the covers, our bare feet eagerly sweeping across and down until Thunk, there it was, a stuffed stocking! And in that one gentle kick, my belief stood for another year. Santa was real.

That’s all it ever took. It was a simpler time, before Santa had an email address and video messaging capabilities, back when kids believed in Santa simply because their parents told them he existed. We didn’t have to take a runaway train ride to a creepily animated Tom Hanks Santa in order to believe in the magic and the myth. All our questions about the jolly old elf were answered via stop-motion animation specials with elfin dentists and Winter Warlocks, which aired only once a year and which we could only watch if our pajamas were already on and our teeth were already brushed.

As a parent in a whole different century, I miss the good old days.

It’s not that I think technology has destroyed the holiday season. On the contrary, I happily bought half of my Christmas presents online

last year. When my older son was 4 and all he wanted for Christmas was a tuba, I spread that request via social media and ended up with two appropriately sized tuba alternatives (a used euphonium bought off eBay and an alto horn donated by a friend of a friend). And my children were appeased in countless holiday shopping checkout lines last year by playing with the Charlie Brown Christmas app on my iPhone. Technology can definitely be a merry-maker.

But there can be too much of a good thing, and I think we’re starting to see the effects of tech-driven holiday nonsense. Take, for instance, the Elf on the Shelf. The idea itself is simple and, I hear, quite effective: Christmas elf doll sits on the shelf by day and reports to Santa by night on the child’s observed behavior. When the elf returns, he chooses a different perch for his daytime spying. Children are excited to find the elf each morning, and he makes an excellent visual for the “you better not cry, you better not pout” directive. 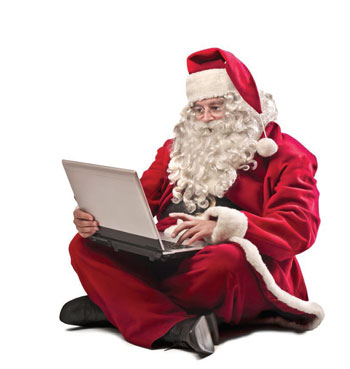 But the internet has turned this newish holiday tradition into an ugly exercise in parenting one-upmanship. Moms are going nuts with the elf on social media. Last year on Facebook I saw elves destroy kitchens, hang a dozen pairs of little girl’s underwear all over her Christmas tree, fraternize with Barbie, and leave painted footprints all over the floor. I suspect the real reason for the madness is not so much “fun for the kids” as it is “acquaint creativity with superior parenting and receive ‘likes’ and ‘repins’ for both.”

I’m all for cultivating magic and memories, but we shouldn’t need direct access to “chatting Santa” (Santabot.com) in order to do it. There was something about having to wait until Christmas morning to see if Santa received your handwritten letter (on real paper! Mailed with a stamp!) that made the moment of seeing your Christmas wish under the tree truly remarkable.

We shouldn’t need the Portable North Pole (www.portablenorthpole.com), which gives kids direct access to Santa via a customized video message in which Santa proves he knows their names and mentions one specific present they want.

There’s even a website called iCaughtSanta, on which parents can Photoshop a posed, surprised-looking Santa onto a picture of your otherwise empty living room, “proving” to your kids that he was there. The website description of this service begins: “In three simple steps, iCaughtSanta can help you turn a typical Christmas morning into something spectacular!”

I’m not saying we shouldn’t let our kids have some holiday fun in ways that weren’t available to us as kids. By all means, check out the NORAD Santa Tracker (www.noradsanta.org) on Christmas Eve, to see exactly where on Earth he and his reindeer are flying at the moment. The excitement of watching him creep closer to South Carolina is sure to get even the most vocal straggler hopping into bed. But don’t underestimate the magic of simply having to wait and wonder. Proof of Santa will come on Christmas Day, offline, in real time. In the meantime, complement the virtual with the actual. Stop by the official tree lighting at the Arts Center. Say hello to Santa at the Salty Dog. Take in the spectacle and tradition of the Bluffton Christmas Parade.

If you play your parental cards right, all it will take on Christmas morning to make magic is a single wish come true under the tree. Or an earlymorning kick under the covers.

Robyn Passante is a freelance writer whose favorite part of Christmas morning is lying in bed listening as her two boys discover their Christmas stockings at the foot of their beds.