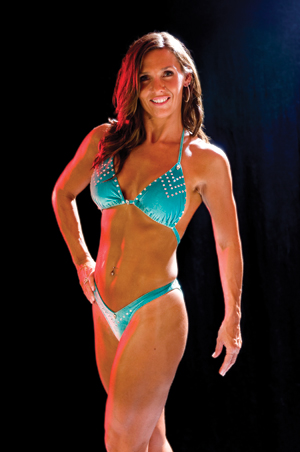 We've all heard of beauty pageants, and most of us have heard of body-building competitions. But in between those two are "figure competitions," which emphasize muscle tone over muscle size. And for one local woman, figure competitions have motivated her to live a healthy lifestyle and to be disciplined about her diet.

Lisa Murphy, owner of The Sanctuary, a day spa on Hilton Head, first heard about figure competitions from her trainer, Alice Batson. "I had trained with her for a couple of years and she mentioned to me a couple of times that I should compete in one," said Murphy. "The thing that put me off was the whole diet thing. I love training hard, but also like my Starbucks, margaritas and desserts!"

It was that love of empty calories that eventually drove Murphy to compete. “I realized that at the age of 41 that I really needed to start eating a more balanced diet,” she said. “Also, there were a few people who said I could never do it because they knew 90 percent of my diet consisted of sugar. I wanted to prove that will power and self control were a part of my vocabulary."

So, she decided to forge ahead and compete in figure competitions.

In those competitions, participants are assigned by figure class (which is determined by height), and are judged in two outfits: a one-piece bathing suit and a bikini. They then pose and are judged on a wide range of characteristics, including muscle tone, beauty and posture.

“The goal,” Murphy said, “is to put on as much muscle as you can, lose as much fat as you can, and still look feminine.”

Of course, with her love of sugar, dieting became the most difficult part of preparing for a competition in swimsuits. “The diet was definitely the hardest part," she said. "I trained for 12 weeks, two hours a day, and then the last three weeks, (the workout) was three hours a day. But eating every three hours — pretty much nothing but egg whites, grilled chicken, asparagus and salmon — was very hard. The only carbs came from oatmeal. I had to eat 160 grams of protein and no more than 40 grams of carbohydrates a day."

Having two children at home didn't make strict dieting any easier, she said. “It was hard having kids at home who have Doritos, ice cream and Oreos and who ate junk food at least once a week."

But she faced those obstacles and prepared for 15 weeks for her most recent event, the 2010 South Carolina State Championships, held in Columbia in June. She took home third place in her figure class. "I was somewhat happy with third, although I realize my lack of experience in regard to posing let me down," she said. "I'm going to compete again in October and want first (place)!"

Regardless of where she places, Murphy said the experience has already helped her accomplish a different goal. “I was a very non-confrontational person. I needed to be stronger, not physically, but mentally. I needed more confidence, and this has given me that.”