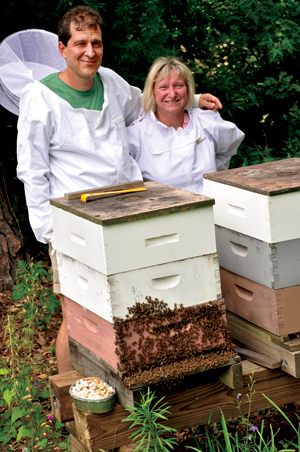 Silcox and his wife, Julie, of Hilton Head Island, are novice beekeepers. They got into the unusual hobby as a way to benefit their garden and with the hope of another sweet reward.

“We got into it just to do it, and to give the honey to friends and family,” said Silcox, who owns Healthy Environments Inc. on Hilton Head. For his business, Silcox cleans and fills ductwork, fixes moldy crawl spaces, removes toxic mold from homes and more. As an extension of giving people healthier environments, Silcox is hoping to harvest enough honey to be able to give some to his customers. Honey, after all, is a natural allergy fighter, Silcox said.

“If you eat local honey it helps stabilize your system and helps lessen allergies to local pollen,” Silcox said. “I’m hoping to be able to give some honey to everyone I do business with.”

That goal won’t be too hard to reach, considering you can get 30 pounds of honey from every 12-by-16-inch box of honeycomb cells, and the Silcoxes have six boxes.

“I think we’ll have a good yield,” said Silcox, who recently tried a bit of his bees’ honey and found it to be “nice and sweet.” The couple has lived in the Lowcountry for 20 years and both are Realtors with Century 21. So far they’ve found beekeeping to be a hobby that’s slowly getting some buzz in the Lowcountry, but still not very well-established.

“I’m thinking of starting a little beekeeping club in Beaufort/Jasper County,” Silcox said. The couple has attended a few meetings of the Coastal Empire Beekeepers Association in Chatham County, but hasn’t found many local beekeeping resources on this side of the Savannah River.

Beekeeping in general has grown in popularity in the last three years, said Greg Stewart, president of the Coastal Empire Beekeepers Association. The association was averaging 10 members a month at its meetings, but that has swelled to about 25 a month, Stewart said.

Gardeners are most attracted to beekeeping because it’s so beneficial to gardens, he said. And it’s an inexpensive hobby as well.

“For a few hundred dollars you can easily get started,” Stewart said. Plus, the bees themselves are a pretty low-maintenance, reliable lot.

Neither Tim nor Julie Silcox has been stung, though Silcox recently watched with interest as bees repeatedly dive-bombed into his pool for a quick drink while he was nearby. “The bees don’t mess with you if you don’t mess with them,” he said.

The couple is spending their time learning all they can about the critters and waiting for the right time to harvest their first batch of honey.  “There’s really very little to do with them,” Silcox said. “They just sit in the back yard ... and come and go as they please.”