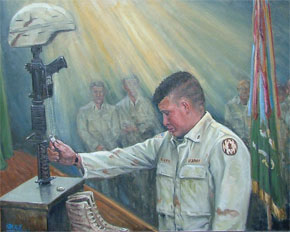 Shealy, of Hilton Head, thinks Joseph, a squad leader training Iraqi police, would have been a wonderful doctor someday.

But, she stops herself. “I realize that my dreams and desires are mine.” Her son’s death, however, did inspire her to create art to show the world what Joseph saw every day in Iraq.

“I went and had cofee with one of my friends who had lost her husband 13 days after we had lost Joseph, and that was when I saw her artwork. She paints in really vibrant colors. It’s beautiful and very happy,” she says.

The friend invited her to the studio and gave her a chance to try painting. Shealy bought some supplies and gave it a go.

“I thought it was something I could do at home to occupy myself instead of sitting in the corner,” she said.

Then the boxes started coming from the Army, gatherings of Joseph’s things: clothes, medals, papers describing the day he rescued between 30 and 50 women and children trapped by fire, and a fash drive full of photos. 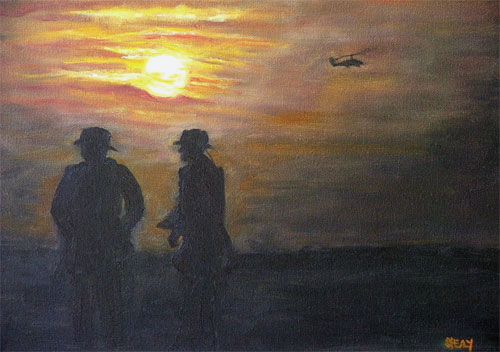 One photograph showed two soldiers in silhouette against a desert night. The dust-filled sky features a helicopter on patrol and the moon, visible through the haze.

“When Joseph was deployed overseas, I would look at the moon. I would know that was the same moon that he would look at,” she said.

“It was a special prayer time. You pray for your children all day long, but that was special time that I would pray specifically for Joseph, that he would look up and know that we love him and that we were praying for him.”

After that first painting, she decided to do others. One is of a soldier sitting on a sidewalk calling home; another is of an MP weighed down heavy with gear, a look of determination in his eyes.

But before Shealy painted any specific soldier, she would ask for permission. “There is such raw emotion in all of those photographs that came back, it is only the right thing to do,” she said. 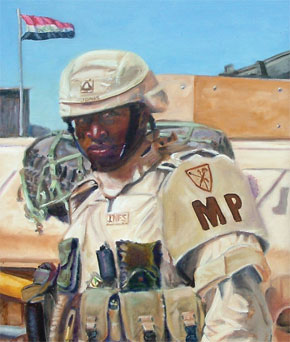 After she started painting, Shealy took some lessons. She worked with a portrait artist. She learned some tricks.

But she also discovered something else about painting.

“It’s therapeutic, the way paint goes on the canvas and you can just move it around. After a while you get into your own little world. Everything just kind of fades away and you’re connected with the paint on the canvas. It takes me away to a place that gives me a chance.”

Mira Scott, who will host Shealy’s show at her Picture This Gallery, said she wanted to show the paintings as soon as she heard about the work.

“It gives you a snippet of what goes on over there that the average person doesn’t get to see,” said Scott. “There is one of a soldier sitting down on a sidewalk. It gives you a real feeling of how far away they are and how lonely they must be.”

Shealy hopes to sell prints of her work to raise money for charities that support military families.

But she also hopes that her work reminds people of something her son told her.

When/where: 9 a.m., Friday, Nov. 6
The event: Military Officers Association of America will be placing flags at the graves of veterans at Six Oaks Cemetery in Sea Pines

Following the event, a luncheon will be held at Palmetto Dunes Oceanfront Resort. The luncheon cost is $20 per person. To reserve a spot at the luncheon, call Lois Wilson at 843-837-3553.

Opening Reception for “Iraq: The World My Son Saw,” by Suzy Shealy

Proceeds from the sales of prints will be donated to the Freedom Alliance Scholarship Fund.