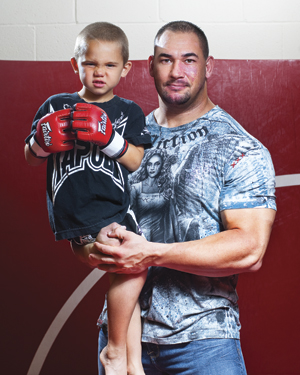 The repeated thuds on the mats reverberate throughout the gym. These are the sounds of the newest sport to enthrall America. But they are not in some remote place, hundreds of miles away – they are taking place on Hilton Head Island. And the mats are open to anyone interested.

The sport is mixed martial arts, a combination of boxing, wrestling and martial arts that owns the fasting-growing fan base in the country. And there is a local flavor now, thanks to the opening of Riptide Mixed Martial Arts Center on Mathews Drive. Riptide MMA, owned by 33-year-old John Juarez, offers classes and training in a variety of disciplines, including jiu jitsu, Muay Thai kick boxing, self defense and MMA.

For Juarez, his interest in MMA comes from his childhood, when he trained in tae kwon do and his father participated in aikido. After spending 12 years in the Marine Corps, he decided it was now or never to pursue his dream.

“When I was young, I always wanted to fight,” said Juarez. “But I never had the time to train.”
Juarez opened Riptide in part to train, in part to teach others. He offers numerous classes to a variety of age groups. He recently started a class teaching kickboxing and self defense to younger children, ages 5 and up. It’s one of three classes he intends to offer to various ages of children, which is part of his message that MMA and related disciplines are not just a niche sport.

“Some people see that there’s all this blood,” he said. “But actually it’s a pretty safe sport.” 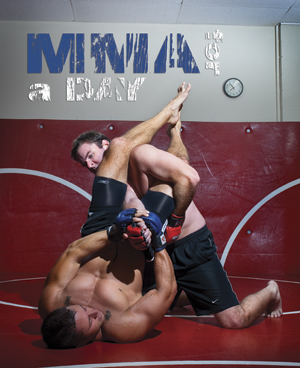 HHM: Can you briefly describe what you did?

Will Mulvey: (John) took us aside and warmed up with Jeremy and I in the beginning. Basically we went over different submissions. He showed us the basics of jiu jitsu. A lot of it was close to the body. All of it was based around movement. He showed us if you moved your arms in a certain way, you can leverage (your opponent). Jiu jitsu is all about leverage.

Jeremy Swartz: It started with a warm up. We did shrimp crawls, which is basically going up and down on the mat on your back. It wore me out in the first five minutes.

WM: The first thought that went through my head is that when you see them do it on TV, they do it so seamlessly. He showed us 15 different submission moves in 45 minutes, and he just went through each one slowly. What was interesting is that was just a small part of MMA, and you see these guys on TV, they do it so easily. There are so many different things that can go into a fight, so many different positions. You have to get your elbow in the right position, your knee in the right side. It’s so technical.

JS: That’s what John was telling us – it’s like a physical game of chess.

HHM: How soon into the session were you guys starting to tire?

JS: After John finished showing us basic holds, we did some physical drills. We had some heavy bags and we layed them on the ground. After partnering up, one guy would be on the ground with the bag pummeling it from all sides using knees, elbows for two minutes straight. The other guy would be trying to knock you off the bag or attempt to knock the bag out from underneath. My guy was slapping me in the head, taking shots at my ribs. I’m trying to block that and work the bag. It was awesome.

WM: (Jeremy) and I work out four, five days a week. This was a two-minute drill and we did it twice, and he and I looked at each other and said that was a heck of a workout. You’ve got to appreciate these guys and their lung capacity. I just appreciate these MMA fighters.

JS: There’s cardio, and then there’s sick cardio, that was a stinger. Anyone looking to take their workout to the next level should give it a shot!

HHM: How were you guys feeling the next day?

WM: There was another drill that you had to take your guy down. So I had to get my arms around John 10 or 12 times and take him down. That was tiring. The next day, my lower back was hurting pretty bad. My neck was sore.

JS: My neck was extremely sore, but it was an experience I'll never forget.

WM: It was interesting, a lot of those guys I could tell they had rib injuries. It’s a tough sport. Most of them had wraps around their legs.

Juarez also wants to help others chase his shared dream – fight professionally. His evening classes where he teaches jiu jitsu and MMA are filled with men in their 20s or 30s whose muscles would leave a tight T-shirt in shreds. At these sessions, Juarez teaches takedown moves, watches or participates as participants grapple on the mats in pairs, and offers small hints on how to induce submissions from opponents

“It’s not dirty; it’s mixed martial arts,” Juarez told a class as he demonstrated various positions of a neck hold while grappling.

The immediate response to Riptide’s opening underscores the growing interest in MMA, as professional fights are now broadcast on network television and prize money continues to increase.

“They have it a lot more organized now,” said 26-year-old Bluffton resident Mike Colella, who’s been training for a year now. “And it’s become more accepted, too.”

Colella is a prime example of those drawn to the sport. Having always wanted to competitively fight but unsure of himself or the avenue, he found the courage to try MMA and loves the competition and camaraderie of the sport. With Juarez convincing him that he will be ready to fight eight months from now; Colella is just one of many local residents who are benefiting from Riptide.

With so many different disciplines available, it might not be long before Juarez and Riptide are household names.