LUKE MCGOWAN IS CARVING OUT HIS FUTURE ONE FRAME AT A TIME.

The photo, one of many on the Luke Shades Instagram feed, reveals the humble beginning of a fashion brand that is storming the beaches of the East Coast.

It shows a cheap patio table of metal mesh on a sun-baked patch of concrete, an orange box cutter, and a primitive set of sunglass frames cut from a piece of 1/8-inch scrap plywood. 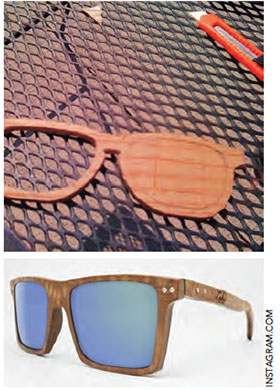 “Hey, you gotta start somewhere,” the caption reads. “This first pair was enough to convince me to quit the college life. ... Good thing the quality got a little better.”

Scrolling through the rest of the Luke Shades feed, you’ll see that the quality did indeed get better, with frames in rippling tropical hardwood, honey-hued chakta viga wood and marbled Honduran rosewood staring back at you from the smiling faces of beach bums, world explorers and adventurous souls bathing in the sun of youth.

From that one pair, Luke McGowan, the driving force behind Luke Shades, has created a brand image that resonates with the youthful pioneers that the media has taken to calling “millennials.” (NOTE: They do not call themselves this, and we use the term here merely for simplicity’s sake).

Beyond being irresistibly Instagrammable, a must if you’re selling anything to millennials, Luke Shades carry the invaluable cultural cachet of being handmade, right down to the flourished imprint of “Lukes” burned onto each frame. Even though he has advanced well beyond sourcing the wood from his garage and carving them with box cutters, McGowan still insists on making each pair by hand.

“It’s something I take pride in doing,” he said. “I make everything myself. I source all the wood, I cut it, I shape it … I’ve been offered so many times to outsource.” 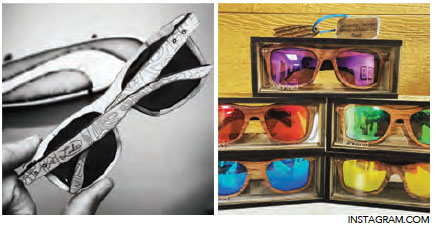 Outsourcing would, naturally, bring down his costs and probably pad his bottom line, but McGowan is part of the new generation of entrepreneurs and wears his self-reliance like a badge of honor. In short, he’s a maker. “If I outsource,” he said. “I lose that.”

It’s a dedication to craft that’s echoed in so many of his generation’s success stories, and it’s helping McGowan write his own as his business flourishes.

McGowan’s crafty spirit didn’t begin with sunglasses. A talented art student during his high school years in Indiana, he found himself drawn to 3-D media like clay and wood, so much so that an art teacher encouraged him to pursue it as a major.

It was not to be, as McGowan pursued a marine biology major at Indiana University. His love of the ocean led him to spend his summers as a lifeguard on Hilton Head Island, where one pair of sunglasses changed everything for him.

“It was kind of a hobby at first — another lifeguard actually gave me the idea,” he said. “I started making them when I got back to Indiana, and it kind of turned into something.”

The second summer, McGowan made eight pairs. Then all of his fellow lifeguards wanted in. “It got enough attention where I knew I could drop out of school and invest in myself and start my own company that way.” Today, McGowan is cutting deal with entire lifeguard agencies to outfit their staffs with his stylish wooden frames.

And while he’s watching his business thrive, McGowan still splits his time between growing Luke Shades and lifeguarding on Hilton Head, where he’s in his fifth summer.

“I enjoy what I do. It’s a nice balance between the two jobs,” he said.