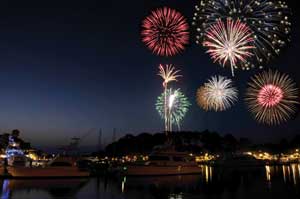 Rick and Vicky Stamey travel from North Carolina to Hilton Head Island twice a year. Each visit includes a trip to Shelter Cove Harbour, so they can look at a longtime friend’s boat docked in the marina. The Stameys also bring along their binoculars to get a closer look at local wildlife.

On the other end of the boardwalk, Kim and Ben Mannen, of Ontario, Canada, take in a stunning view of Broad Creek from a picnic table located in front of ELA’s Blu Water Grille. They came to Shelter Cove for the shopping, dining and scenery.

“There is nothing like this where we are from,” Kim Mannen said. “Everything is open and you can just walk around without feeling uncomfortable.”

Since it was developed in 1983, Shelter Cove has been one of Hilton Head Island’s most popular attractions, drawing millions of visitors. It is also a popular spot for local residents.

“We always love coming here,” said Bluffton’s Chris Jones, who came with his wife Stephanie and their two young children, Aiden and Sophia. “Our kids like to look at all the boats and it’s a good place to take pictures.”

Today’s picture was of Aiden and Sophia in front of the towering 12-foot bronze statue of Neptune, Roman god of the sea. Along with welcoming visitors at the entrance of Shelter Cove’s Mediterranean-style village, Neptune also doubles as a larger-than-life sundial. When the shadow of the statue’s signature trident falls across the 26-foot wide circular base, numbers around the edge indicate the precise time.

But no matter where the shadow falls, right now for Shelter Cove, it’s show time.

The village comes to life this month with Music on the Harbour, the Hilton Head Island Arts Festival and the kickoff of the summer-long HarbourFest celebration. The party keeps rolling in June with the popular Tuesday night fireworks and an all-new Friday night island-themed celebration dubbed ParrotHead Palooza.

This month’s Music on the Harbour series features live performances from 6-9 p.m. each Thursday from Target the Band (May 2), the Patwa Reggae Band (May 9), The Headliners (May 16) and the Jazz Corner Quintet (May 23).

Popular entertainer Shannon Tanner then takes the outdoor amphitheater stage for the 25th year of his Summer Family Show. He will start with performances at 6:30 p.m. and 8 p.m., May 24-26.

The 5th annual Hilton Head Island Arts Festival takes place from 10 a.m. to 5 p.m. May 25-26 at Shelter Cove Harbour. The free event will feature more than 150 artists from around the country displaying paintings, jewelry, sculptures, photography, pottery and more.

Tanner’s summer schedule starts that week and features Monday through Friday shows at 6:30 p.m. and 8 p.m. Before and after Tanner’s performances, Cappy the Clown will provide face painting, balloon animals and other activities. Bouncy houses, hair braiding, and many other events are also part of the annual summer-long celebration, which runs Memorial Day through Labor Day.

“There are thousands of people in the harbour,” Tanner said. “It’s just crazy. I have to really be on my toes because there are so many people and the energy level is so high. It has taken on a life of its own, without a doubt. All the merchants, all the restaurants, everybody involved has contributed to the success and the spirit of HarbourFest. It’s a neat event.”

Shelter Cove’s popular fireworks begin June 18 and will go off each Tuesday through Aug. 13. A special fireworks show is planned for July 4. The fireworks will also mark the start of ParrotHead Palooza.

Tanner has formed a band called Shannon Tanner and the Oyster Reefers that will play a Jimmy Buffett-spirited show with a carnival-like atmosphere each Friday night, June 21 through Aug. 16. Many vacationing families leave on Saturdays, making the Friday night celebration one last party on the island.

“I think we’re on to something here with this ParrotHead Palooza,” Tanner said. “Every person that drives across that bridge on vacation to Hilton Head has that escapist feeling, the very thing Jimmy Buffett and Kenny Chesney have packaged so well. When people come to Hilton Head, they all come with that spirit – get to the beach, get to the golf course, get a Corona. I think we’re filling a niche.”

The ParrotHead Palooza will start at 5 p.m. each Friday. Many restaurants and shops in the village will also participate with special items, food and beverages. Shannon Tanner and the Oyster Reefers will take the stage from 7-9 p.m.

In addition to all the spring and summer events, Shelter Cove is a popular year-round destination with numerous dining, shopping and outdoor recreational opportunities.

“It’s the most beautiful harbour on the island with a great atmosphere and central location,” said Maryanne Laskowitz, owner of San Miguel’s. “It’s a great spot to serve margaritas. We do a nice year-round business and see a lot of out-of-town visitors during the summer months and during spring break weeks.”

The marina is run by longtime Harbourmaster Dave Harris, who finds himself, “busier than a one-armed paper hanger” these days. In addition to running the Ship’s Store underneath ELA’s, Harris coordinates all boat traffic coming in and out of the 175-slip marina.

“It’s well-named, Shelter Cove,” Harris said. “When Hurricane Hugo hit Charleston, we had sustained winds of about 80 knots and it didn’t even blow out an awning. It’s a safe place in a storm. With the buildings and everything around it, you literally don’t get any water action – no chop, no surf, no surge.”

Harris has seen many boats come and go. The most unique was in the late 1980s, when Hilton Head was the alternative home port for the USS Gemini, a heavily armed U.S. Navy hydrofoil built for speed and mobility.

“That was quite a vessel,” Harris said. “They put those foils down and it literally flew.”

The marina can accommodate boats up to 165 feet. Slips are available by the day, week and month by calling Harris (843-842-7001) or sending him an email (dharris@palmettodunes.com).

“It’s just like running a hotel, except the customer brings their own room with them,” Harris said.

Boaters are welcome to swing in the marina to shop, dine or unwind at one of the many shops or restaurants for a few hours, free of charge. Shelter Cove Marina also offers guided kayak tours, boat rentals, boat charters and fishing charters.

“It’s amazing what has happened here,” Harris said. “When they first began Shelter Cove, it got kind of a slow start but it has really made a turnaround. We’re to the point now where there are good, solid businesses here and great restaurants. I think some of the finest eating on the island is right here at the marina. We tell boaters that come in, they could spend a week here, never eat at the same place and get a great meal every time. Then you’ve got all the activities and the Tuesday night fireworks. Shelter Cove has become a center for a lot of activity.”

MUSIC ON THE HARBOUR CONCERT SERIES

Every Friday: 5 p.m., June 21-Aug. 16; Shannon Tanner and the Oyster Reefers perform a Jimmy Buffett-spirited show in a carnival-like atmosphere from 7-9 p.m.