When Eric Riseman moved to Hilton Head Island full-time in 2015 one of the biggest plusses in escaping western Massachusetts winters was the ability to show off his classic cars year-round.

But when he began looking to join car clubs in the area, he didn’t find the fit he was looking for.

“Every club had financial requirements to join, membership and fees,” said the founder of the Palm Trees and Pistons Car Club. “I wanted to do something that gave an outlet for folks who just want to get out and show off their cars in a bit more informal setting.” 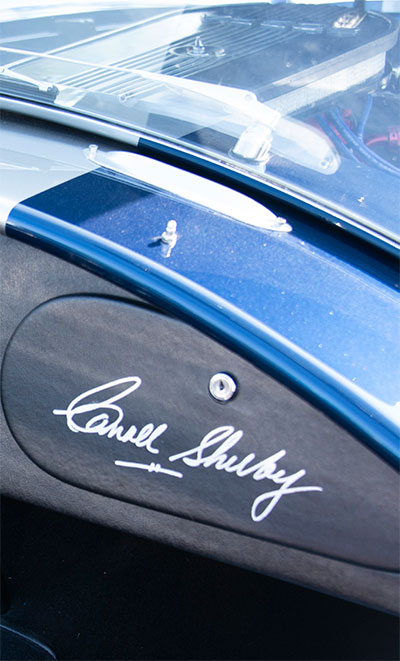 He saw a similar mindset with the show that meets the first Saturday of the month at Lucky Rooster Kitchen and Bar but saw a need to fill the rest of the monthly calendar. So, he went to the management at Sea Turtle Marketplace and said he had the perfect way to bring in new faces to fill the parking lot near the now-empty former home of Stein Mart.

“We approached all of the shop owners and just preached the benefits of bringing some new faces in that might not otherwise stop at their stores, and it was a win-win,” Riseman said.

The club started showing on the second Saturday of the month in October 2021. Slowly but surely, the show has built a loyal following.

“I think the owners appreciate just getting together for free, talking cars, showing off their beauties and learning from other collectors,” Riseman said. “I’m a wannabe mechanic but I don’t have the garage for it. So, I’m constantly learning from our group.”

Riseman is a retired tech sales and marketing executive who is working part-time for American Airlines at Hilton Head Island Airport. He isn’t a volume collector like some you might see at the Concours, just a car junkie who worked hard, stowed some dollars away after putting two kids through college and began to invest in his lifelong passion.

“I had the Matchbox cars like every other red-blooded male of the ‘60s and ‘70s, and I wanted to make those dreams a reality,” said Riseman, who has mostly been a Corvette collector before purchasing a 2015 McLaren, his first foray into the world of exotic cars.

“McLaren isn’t as well known; I think I have one of two on the island from what I’ve seen. You see them racing Formula 1, but you don’t see them as much at the shows,” he said. “Everybody has a Ferrari or a Lamborghini. I just like to zig when others zag.”

Riseman recently bought his first Matchbox in 50 years, a McLaren that matches his real-life model. It’s one of the more unique photos on the group’s Facebook page.

The zigging can be costly, especially when it comes to repairs.

“A ’67 Corvette, it was easy to work on. My 2014 Corvette was impossible to work on and this ’15 McLaren is even trickier to find parts for,” he said.

That proves to be a mixed bag for he and his wife Karen, a nurse at Hilton Head Hospital.

“We both love riding around in it; it’s a fun toy that makes us feel good. My kids joke that I’m spending their inheritance, but it’s time to enjoy all the years of providing and working hard,” he said. “Of course, when it’s time for repairs, my wife wants to put a size 8 shoe up my you-know-what.” 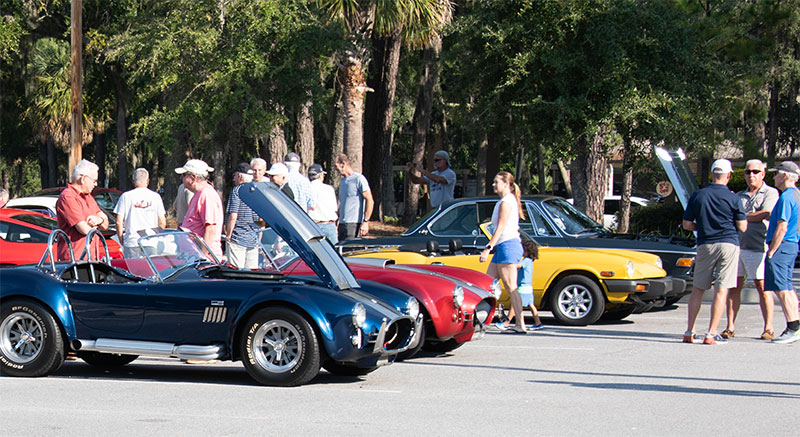 In its year of existence, Palm Trees and Pistons has average about 15-20 cars per month, mostly antiques and exotics.

Riseman said he just hopes to continue to spread the word and organically grow Palm Trees and Pistons.

“We just want to be a conduit to show off your vehicle. I’d love to fill every spot in the parking lot,” he said. “More than anything, we just want to be an unobtrusive way for new and veteran collectors to learn and share their knowledge and their passion.”

The club’s next show is Nov. 12 at the Sea Turtle Marketplace. Check out their Facebook page (search Palm Trees & Pistons) for more information.