There was little to hint at the critical role the Eighth Army Air Force would play in the victory over the Nazis and fascism in World War II when the unit was hurriedly established just weeks after the attack on Pearl Harbor.

At the start, it was far from mighty. It was, in fact, an air force in name only. In those bleak early days following the onset of war in the European and Pacific theaters, the Eighth Army Air Force had no planes.

“The Eighth Air Force was commissioned here in an armory in downtown Savannah, Jan. 28, 1942 — seven men and no planes,” said Pete Nichols, communications and marketing manager for the National Museum of the Mighty Eighth Air Force (NMMEAF). “They drew up the plans for strategic bombing. It was approved and that’s where it started. It eventually grew into the largest air armada in history. At its height, it had over 350,000 men.”

It was nothing short of a marvel that, from its inauspicious and humble beginnings, the Eighth Army Air Force flew its first combat mission against Nazi-occupied Europe barely six months after it was commissioned in Savannah.

The “City of Savannah,” a B-17G bomber at the National Museum of the Mighty Eighth Air Force in Pooler. Known as the Flying Fortress, the B-17 was one of two heavy bombers flown by the Eighth Army Air Force in Europe, and was known for its ability to withstand heavy damage and still fly.

Now, 80 years after the Mighty Eighth was commissioned, the National Museum of the Mighty Eighth Air Force, located in Pooler, tells the stories of the men and machines that struggled to control the skies over Western Europe. It’s been doing that job for 26 years.

“Gen. Lewis Lyle had the idea to create a museum to honor these men,” Nichols said. “In a lot of ways, we’re really lucky that they built it here. I believe it’s a Smithsonian-quality museum. We like to brand ourselves by saying, ‘Those men saved the world. We save their stories.’ We have a fantastic research and archive facility that does a lot of that. Then, of course, the artifacts and displays that we have in the museum present that.”

The primary wartime mission of the Mighty Eighth focused on the strategic, daytime use of heavy bombers, including the Boeing B-17 and the Consolidated B-24, to attack enemy targets. Bomber crews faced a dizzying array of deadly perils as they looked forward to completing 25 missions and earning a trip home. Flak, enemy fighters, bad weather, accidents and working for hours in sub-zero temperatures in unpressurized bombers all contributed to the 26,000 members of the Eighth Army Air Force who were killed in action.

“There was a one-in-four chance that when you went up, you weren’t coming back at all,” Nichols explained. “To do that, and to do that on a regular basis, is quite remarkable.” 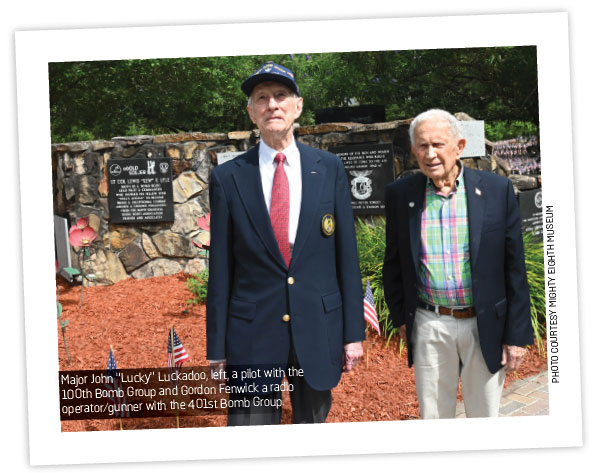 The museum’s centerpiece is undoubtedly the City of Savannah, a restored B-17G Flying Fortress, so called because it bristled with 10 .50-caliber machine guns to defend itself against enemy fighters. Visitors can get a close look at the cramped and difficult conditions its 10-man crews faced in combat.

The museum’s B-17 was built a week after the end of the war and never saw combat. It changed hands a number of times in civilian life before it came into the possession of the Smithsonian Museum in 1984. The aircraft was in long-term storage when the staff at the Smithsonian went looking for a museum that could restore it, put it on permanent display and promise never to fly it again. The NMMEAF checked all the boxes and was awarded the plane at the tail end of 2008.

Within days the plane was disassembled, packed onto six trucks and headed from Chantilly, Virginia to Savannah, where it would be reassembled. Then the hard work of the plane’s endlessly complicated restoration started. The effort would ultimately take six years and over $1 million. 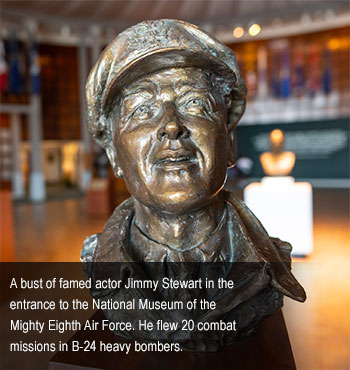 According to museum volunteer Bill Schwickrath, a production company doing work for the upcoming Tom Hanks/Steven Spielberg series entitled “Masters of the Air” spent a full day recording the sounds of those operating turrets for use in the series.

“Where else are you going to get the sounds of these turrets running?” Schwickrath asked. “You may have a dozen of these planes flying today, but they do not have operating turrets.”

The restoration was aided by companies like Gulfstream that loaned expertise and equipment to the effort as well as some ridiculously good luck. When the restoration crew couldn’t locate a top-gun turret, a crew member visiting in Ohio noticed one sitting in a garden getting used as a planter. After untold years in a garden and a painstaking restoration, it is once again doing the job it was built to do and adorns the top of the B-17’s fuselage.

It might be easy to assume that a plane sitting protected in a climate-controlled environment would need very little maintenance. But that’s not the case. A crew of dedicated volunteers constantly attends to the aircraft.

“It’s been a struggle, but it’s fun,” Schwickrath said. “I just love doing this work. Four or five years ago on any Saturday, an elderly gentleman might walk up and tell you what it was like to fly a B-17 as a kid in the war. Some of those stories would make you cry. These guys went through pure hell flying these planes.”

Nichols said the museum continues to build upon its success telling the story of the Mighty Eighth.

“We’re going through a big capital campaign right now with a goal of raising $10 million,” he said. “We are just shy of $8 million. We’re going to expand the museum with an extra 30,000 square feet. Once we get that completed, we will be able to fit a complete B-24 inside.”

The National Museum of the Mighty Eighth Air Force is located at 175 Bourne Ave. in Pooler, Georgia. Hours are 10 a.m. to 5 p.m., Tuesday through Saturday. The museum is open on Sunday from noon to 5 p.m. and closed on Monday. For more information, visit www.mightyeighth.org.