For some, dreams never die. “All I’ve ever wanted to be is an artist,” confides nationally acclaimed artist Charles Cashwell, who splits residency between Bluffton and Sautee Nacoochee Valley in north Georgia.

The spark that ignited Cashwell’s passion occurred at age 9, when he lived in Aiken. Rather shy at the time, Cashwell was so intrigued by a neighbor’s art studio that he boldly knocked on her door and asked if she could teach him to paint.

Those classes proved to be the foundation for an everevolving career in art. 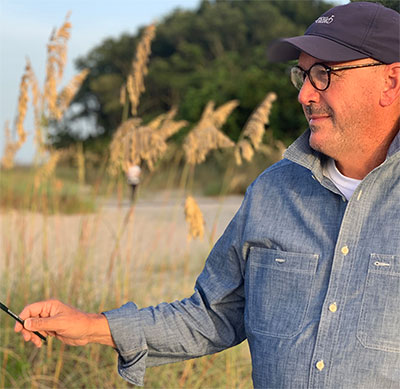 “She would set up a still-life, and we would paint it, learning about composition, values, color theory, and drawing,” he said. “That’s how I paint today, except as you get older, you copy less and paint feelings more.”

Because Cashwell’s father was a pastor, the family moved frequently, but Cashwell’s art enthusiasm never wavered. During a short stint in Charleston he fell in love with the beauty of the Lowcountry, hoping someday he’d return.

After attending high school in Charleston, S.C., Cashwell attended the Ringling School of Art & Design in Sarasota, Fla., where he met his future wife, Rebecca. Eventually, they married, moved to Atlanta and started a family. While Rebecca pursued a career in graphic design, Charles became an illustrator for textbooks.

But Cashwell had bigger ambitions.

He was adept at drawing the figure, so he decided to teach himself how to paint portraits. Part of his tutelage included trips to Hilton Head to visit with Joe Bowler, famous for his magazine illustrations and portraits of notable figures like Rose Kennedy and Julie and David Eisenhower. Bowler had a studio in Sea Pines until his death in 2016.

“I was doing things for free, just to get the experience,” Cashwell said. “Then I did a small painting, and Rebecca took it to her office at the agency she was working at.”

A client of Rebecca’s saw it and hired Cashwell to paint a portrait of her daughter. Word spread among that client’s friends, leading to more portrait requests. 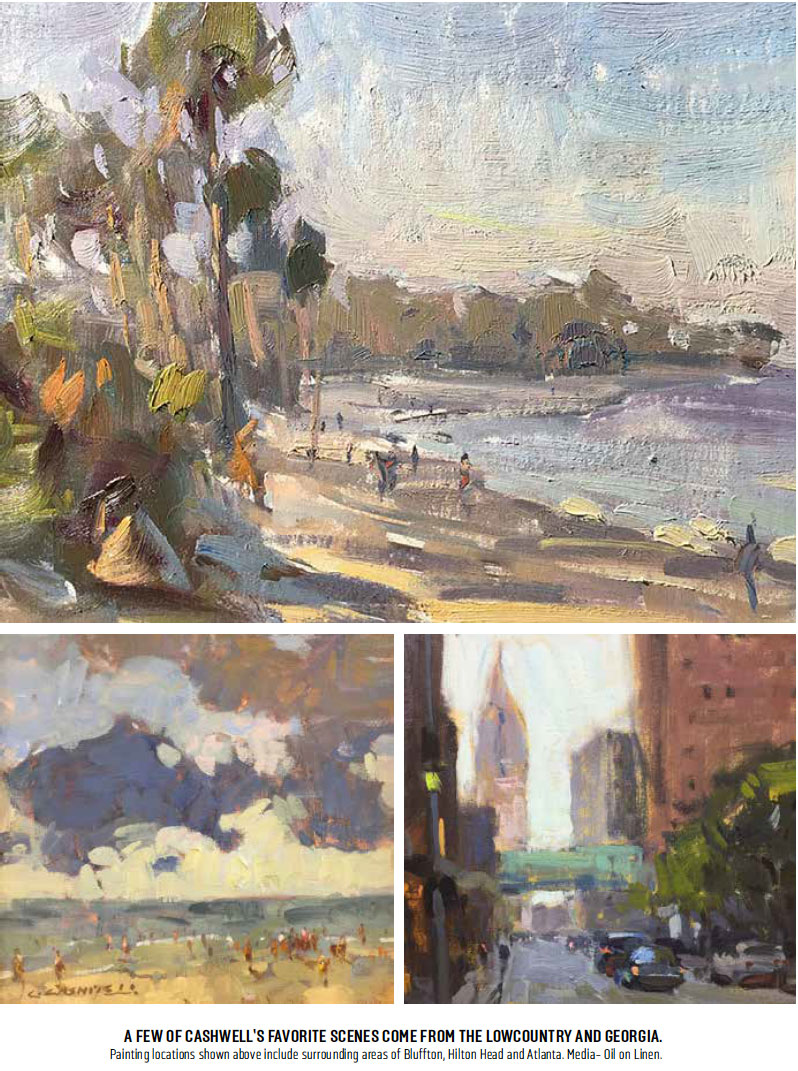 So thrilled with Cashwell’s talent, one woman not only told all her friends in New York about him, she also arranged for him to fly there for a week to do photograph sittings for half a dozen interested families.

Most of those clients were connected to Wall Street. Without ever advertising, Cashwell’s portraiture work remained steady throughout the South and Northeast for the next 16 years – until the financial collapse in 2008.

“I was sitting in the Atlanta Airport when I got a call,” says Cashwell, detailing how his clients started canceling their commissions. “You look at it and think ‘that’s a bummer,’ but it gave me a chance to slow down and do what I really wanted to try.”

Thus began his foray into Fine Art and Plein Air – a “hoitytoity word,” he laughs, “that means painting outside.”

Once again, he taught himself, mastering the quickness needed to capture a moment in time before the mood and lighting change. His favorite scenes come from the Lowcountry, made more accessible eight years ago when he and his wife purchased a cottage in Moss Creek. 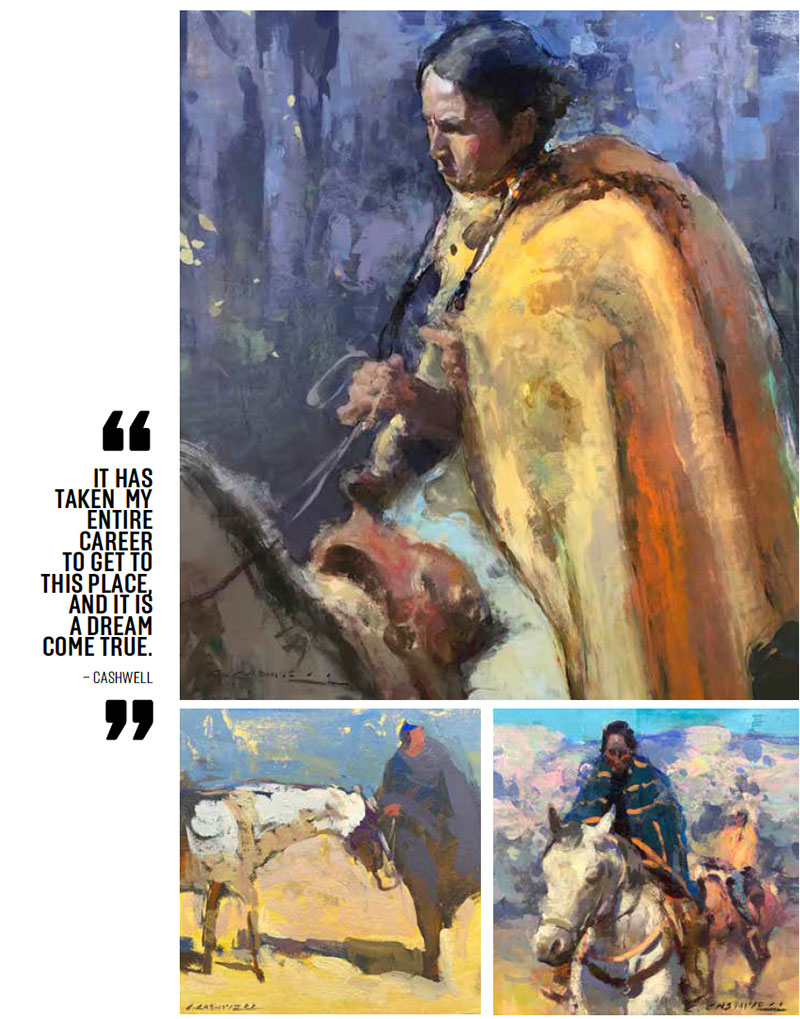 “I love the architecture in Old Town Bluffton but the marsh and landscape most of all,” he says. “On the beach there’s one straight line, so I make it about the colors, people and clouds. The marsh, you have all those diagonals and the trees; it’s more interesting.”

Carting his little French easel, a box of oil paints, as well as a palette, brushes, and turpentine, Cashwell sets up shop, hoping to depict the “spontaneity” of whatever is in view.

“I try to capture that feeling when you glance at something and it catches the corner of your eye,” he says. His impressionistic images have garnered quite a following, earning him invitations and awards from various art communities.

Last year the Art League of Hilton Head awarded him first prize at their national juried art show for his painting, “At the Beach.” Currently, plein air enthusiasts are buzzing about his one-man show at The Boyd Gallery in Newnan, Georgia, that runs throughout September.

His Bluffton workshops consistently attract attendees from across the country.

But it’s his newest endeavor with Mockingbird Gallery in Bend, Oregon, that has Cashwell’s enthusiasm soaring. The elite gallery now houses Cashwell’s western-themed paintings, inspired by a three-year stay in Taos, New Mexico where he fell in love with the Pueblo people and their land.

Just hours after his first collection of paintings arrived, the gallery called to inform him that someone had purchased his most expensive piece.

“It has taken my entire career to get to this place, and it is a dream come true,” he says. “The check is nice but knowing someone is moved by what you did – that’s pretty special.”

Picasso once said, “Every child is an artist; the problem is staying an artist when you grow up.”

Not so for the 63-year-old Cashwell.

See more of his work at cashwellfineart.com